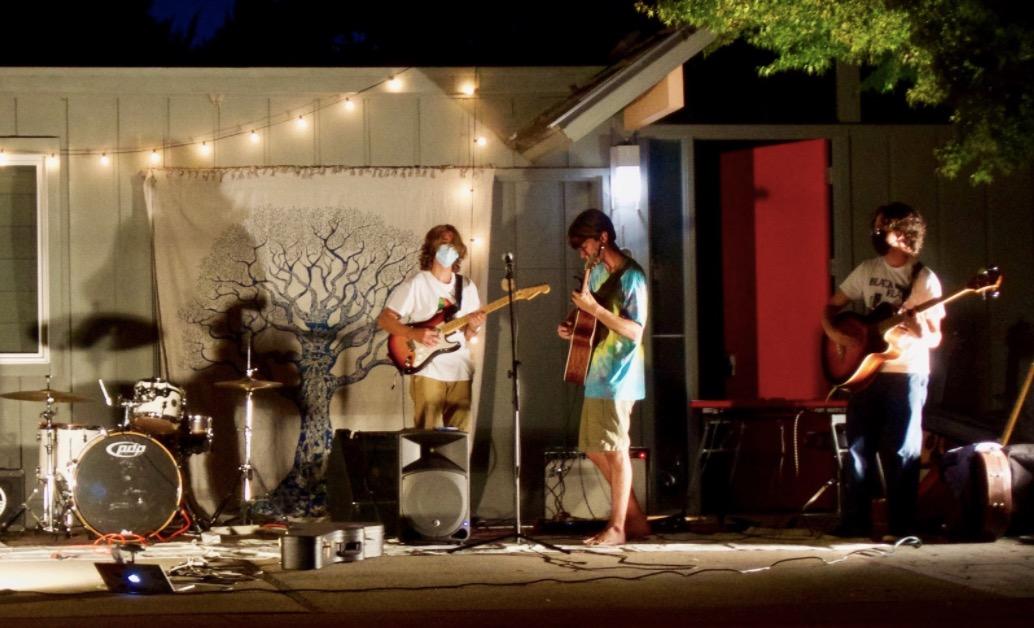 COMMUNITY BUILDING — One of Palo Alto’s local student bands, Good Fast Cheap, holds a socially distanced concert in a band member’s backyard. The response to the band’s performance was overwhelmingly positive. “I think seeing other people happy and full of life sort of induces that in yourself as well,” Paly senior Alex Washburn said. Photo: Anna Oft

Beginning in May, six Palo Alto High School students and alumni decided to assemble a small band and play music for others during the COVID-19 pandemic. Good Fast Cheap has played over 10 socially distanced concerts in a band member’s driveway and has held one concert in downtown Palo Alto.

According to Santa Clara County COVID-19 guidelines updated on Sept. 24, outdoor gatherings are discouraged but not prohibited if all attendees conform to social distancing rules. To attend these quarantine concerts, audience members must wear a mask at all times and sit six feet apart.

“People were just so down during the whole thing [shelter in place], and when people saw the band smiling and dancing it became an exchange of happiness,” band member and Paly senior Alex Washburn said. “I think seeing other people happy and full of life sort of induces that in yourself as well.”

The community responded with overwhelmingly positive feedback and gratitude for the performances both verbally and on neighborhood apps like NextDoor.

“I think it’s definitely a big relief for people to hear music and have an illusion that things are normal just for one afternoon.”

“We got one comment that was really mad at us for doing the concert because it was too loud, but I was super blown away when 110 people commented in response to the negativity telling us to ‘Please keep doing it,’” Washburn said.

Good Fast Cheap continues to hold concerts every other week to make live music accessible for any community members who are interested.

Metro, an acclaimed teen band in Palo Alto have also hosted concerts in driveways and played street music on California Ave. since the beginning of shelter-in-place orders.

“I think it’s definitely a big relief for people to hear music and have an illusion that things are normal just for one afternoon,” Metro keyboardist and recent Castilleja School graduate Toni Loew said.

Metro has just released a new single “Her” and is planning a bigger socially distanced concert soon.