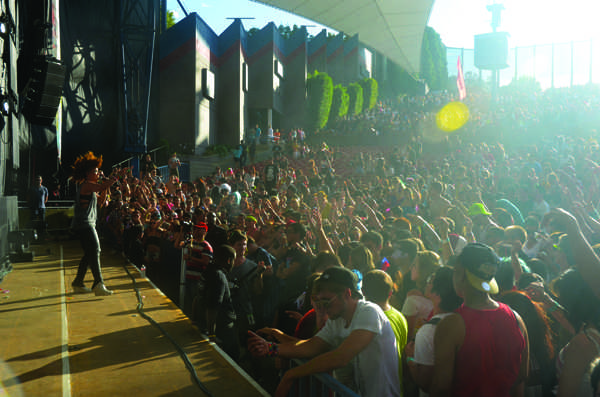 The entrance to the Shoreline Amphitheater overflows with thousands of teenage girls wearing tutus, neon bras, and not much else.

Loud, thumping bass can be heard anywhere in a 5 mile radius of the concert. I push my way through the crowd and as I turn the corner, the concert becomes visible in the horizon. In the setting sun, the throbbing bass of the beginning acts blasts through the parking lot which has been converted into a secondary stage.

The flash of an iPhone camera goes off every few seconds as Instagram is flooded with pictures of glittery concert-goers toting flavored vodka and pictures of the venue itself. Entering the concert from the parking lots offers an aerial view of Identity Festival, a huge electronic music concert which tours venues throughout the country every summer. Teenagers and college students from the Bay Area gathered in multitudes from 2 p.m. to 11 p.m. on Aug. 17 to listen to artists like Eric Prydz, Excision, Wolfgang Gartner, Porter Robinson, Dr P and Eva Simons.

I am searched for any contraband items (open water bottles, alcohol, drugs) and then released into the festival. Restaurants line the sides of the opening walkway, serving beer and liquor to those with over-21 wristbands (which are easily attainable even to those under 21) and other fast food and soft drinks to those without. Walking toward the main stage, a steady stream of people spills through the walkway — every age, race, gender and sexuality represented.

Visibly drunk and high teenagers stumble through the venue, and some high school and college students even pop pills like the club drugs MDMA (ecstasy) or LSD (acid), which are commonly found in more hardcore rave scenes.

The festival stretches from the inside of the amphitheater at the main stage to an overflow parking lot where the Rockstar stage is set up. The two stages face away from each other, so two artists can play at once without any overlap. The music never stops, and although it all falls under the category of EDM (electronic dance music), each artist is completely different.

“The music was really amazing, and once it got dark they had really cool visual effects and light shows, which made it fun to just enjoy if you weren’t dancing,” Palo Alto High School junior Amanda Aldridge says. “I had gone to a couple of the Shoreline country concerts before this, but the two genres of music are completely different and that was clear with the atmospheres at both of them.” 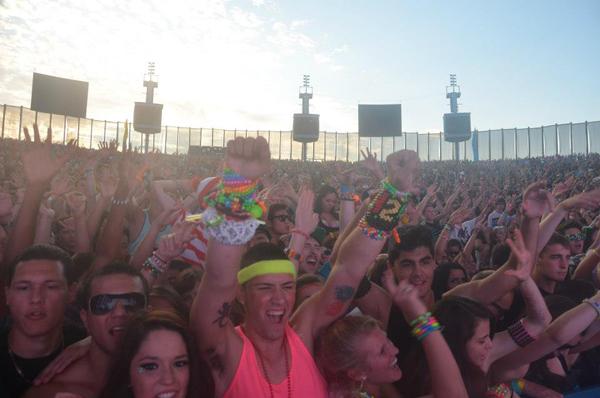 This festival was not the first nor the last summer concert event to attract huge numbers of Paly and Gunn students to the Shoreline Amphitheater. The concerts offer a fun outing without parental supervision where peers can gather for generally affordable prices, and getting to and from Shoreline takes only ten or fifteen minutes by car, meaning transportation is relatively simple. Featuring arists ranging from country music stars to Top 40 bands, the concerts draw in a variety of audiences. Bigger-scale music festivals in the city, where tickets are more expensive, like Outside Lands and the upcoming Treasure Island festival are also becoming more and more popular in the Bay Area, especially among high schools students. At Shoreline, smaller festivals and concerts ranging from country music to dubstep draw in huge crowds of teenagers.

The two main country concerts this summer — Toby Keith and Brad Paisley — attracted a slightly different crowd than Identity. Most Paly students probably had Facebook or Instagram newsfeeds full of their peers dressed in short shorts, plaid shirts and cowboy boots on  unidentifiable lawns. Sophomore Caitlin Duff Brown went to Identity this August, as well as country concerts over the summer.

“Identity was a tougher crowd, but was so fun because it was really carefree, country concerts are more social and sorta like a party where you talk to people the whole time. Identity was dancing and stuff like that!” Duff Brown says.

Rock the Bells, another music festival held at Shoreline, was two days long. Tickets sold at about $100, which weren’t as pricey as Outside Lands, but not as cheap as Identity.

“[It was] amazing because you get two whole days to see rap legends and newer more popular artists,” junior Karina Dutra says. “Meeting new random people is hilarious, and the atmosphere was different than most concerts I feel like because it’s an all day long festival and there [are] honestly all different types of people,” says Dutra.

“Kid Cudi is God,” says junior Alex Grandy of the rap artist, who was a headliner for the event. Other famous artists who performed included Mac Miller, Tgya, 2 Chainz, and J Cole. Over 20 artists performed, meaning there was an eclectic mix of styles over the course of the festival.

The cheaper concerts at Shoreline are better for those who care more about the social and party aspect, rather than the music. San Francisco has better festivals for those who care about quality artists and have a less tight concert budget. 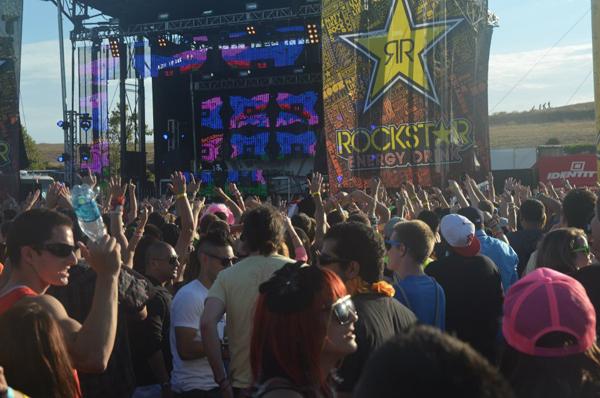 Just the weekend before Identity, San Francisco disappeared beneath a cloud of smoke for 72 hours while people of all ages gathered for the annual three-day music festival Outside Lands. The state-renowned three-day concert featured bands like Fun. and Foo Fighters as well as solo artists like Stevie Wonder and Regina Spektor. The unusually high ticket prices scared off some teenagers.

Festivals are less frequent in the Bay Area, while venues like the Fox Theater, Shoreline, The Greek Theater, The Fillmore and HP Pavilion host solo arists or bands several times a month. Recently, Edward Sharpe & The Magnetic Zeroes came to The Greek, attracting a large number of Paly students.

“The Greek Theatre was by far my favorite venue I’ve ever been to. Aside from the floor where it was very easy to get good viewing spots, you could also get a great view sitting or standing in the risers,” Zhao says. “The venue itself is very aesthetically pleasing. The facilities were also very convenient and the sound quality was great.”

The mob of people leaving Shoreline continues for a mile outside of the amphitheater when Identity closes at 11 p.m. The rush to get out is understandable — after all, there are pictures to upload, lyrics to be tweet, and songs to download. And a recovery period was necessary before Rock the Bells next weekend.