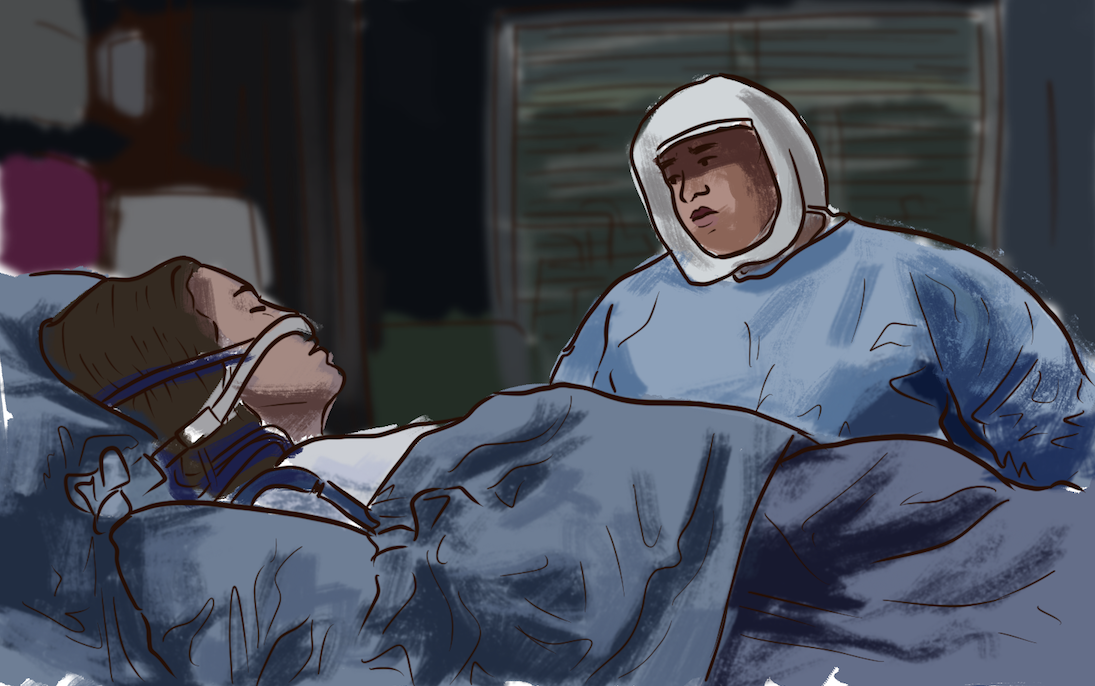 KEEP FIGHTING — Miranda Bailey urges Meredith Grey to fight for her life as she struggles through complications of COVID-19. Art: David Tomz

Meredith Grey lays on the asphalt of the parking lot, helpless and unconscious. Cormac Hayes spots her and rushes to her side, screaming for others in the parking lot to get her a gurney and oxygen. At the height of the pandemic, Grey is admitted into the ICU at Grey Sloan Memorial Hospital with COVID-19 — while the hospital struggles to keep their staff and their patients safe around her.

This is the premise of the latest season of “Grey’s Anatomy,” one of ABC’s most successful shows of all time and America’s longest-running medical drama. The TV show’s 16th season was abruptly cut short with the onset of the COVID-19 pandemic. But when season 17 premiered in November, it once again enraptured viewers with a thrilling plot and proved that despite the years it has run, Grey’s Anatomy will continue making history as a staple TV medical drama.

“It’s kind of shown me how hard it is for them and helped me gain a lot of respect for their work right now.”

When COVID-19 broke out across the world, filming and production of most TV and movies quickly came to a halt –– and Grey’s Anatomy was no exception. As the writers, producers, directors and crew quarantined at home, they wondered whether this real-life experience was something they could bring into the new season of the show as a way to open the eyes of the audience to healthcare workers risking their lives during the pandemic. They took advantage of the opportunity by focusing season 17 on COVID-19.

The newest season is filled with all of the usual drama that follows the doctors of Grey Sloan Memorial including cheating scandals, new and surprising relationships and the trials of parenting. However, this season, the normal drama is accompanied by the overwhelming exhaustion and overwork resulting from COVID-19. It is also set apart by the onscreen return of beloved characters who met their demise in earlier seasons. Though the show has been rumored to be nearing the end of its long run, considering lead actress Ellen Pompeo’s contract will be up at the conclusion of season 17, fans are happy to see that the drama of the show hasn’t changed.

Paly students have enjoyed watching the latest season and have found the portrayal of the pandemic to be eye-opening, as they watched healthcare workers struggle to continue through the challenges of COVID-19.

“Watching the newest season has shown me so much about how doctors are working during COVID,” junior Rachel Ellisen said. “It’s kind of shown me how hard it is for them and helped me gain a lot of respect for their work right now.”

Grey’s Anatomy has always been able to make a mark in the world by centering its storylines on subjects that need more discussion such as mental health, abusive relationships and sexual assault. Season 17 was no exception, touching viewers around the world with the ability to shine a light on a current human experience. Even if season 17 is its last, the legacy of Grey’s Anatomy will live on as a trailblazer of the TV industry.