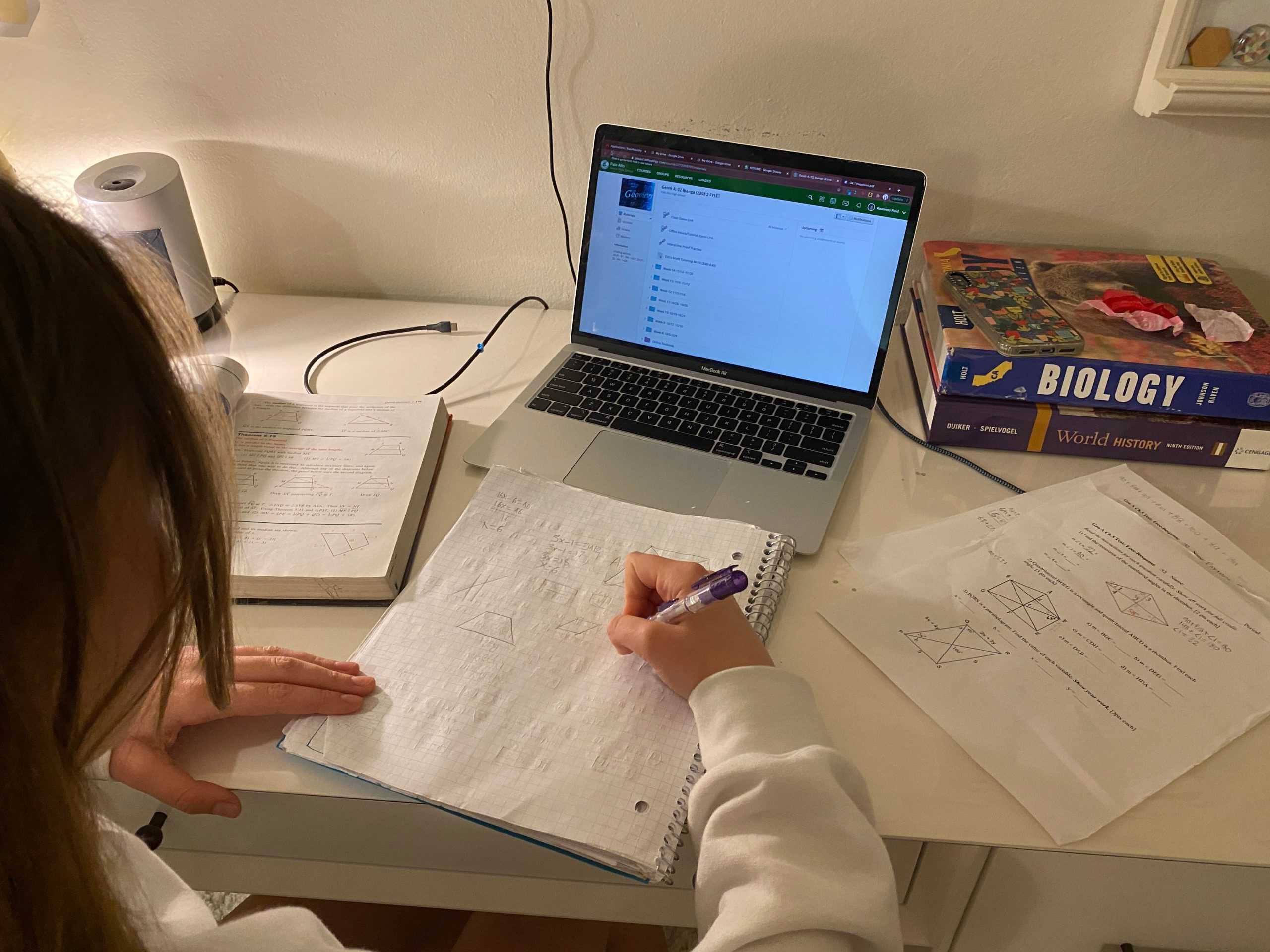 TESTING FROM HOME — Palo Alto High School freshman Roxanna Reid completes a Schoology quiz. Students like Reid have had to create a successful test-taking environment inside their own homes. “It might be worth it to just postpone [finals] or call off until the spring,” Reid said. Photo: Iva Reid

Students and teachers have mixed feelings about the Palo Alto High School final examination schedule this year, which incorporates exam periods into the pandemic bell schedule.

Palo Alto Unified School District determined over the summer that all middle and high school’s schedules must be aligned, which restricted the ability to design a custom finals schedule week. According to the new schedule posted online, students will have some classes that are reserved solely for review on days where they also have finals.

“The good thing about the schedule is that students will only take up to two finals per day, and they are not back-to-back,” Algebra 2/Trig A and Intro to Analysis and Calculus teacher Gabrielle Juan said. “However, I wonder if it is equitable for some periods to have an extra asynchronous day of instruction or review than the other periods.”

Freshman Roxanna Reid said she is concerned about the integrity of  finals in the online environment.

“Taking assessments online kind of sucks because you have to put such an effort in to be honest and not cheat with notes and the internet,” Reid said. “So that’s definitely a factor to consider and it might be worth it to just postpone [finals] or call off until the spring.”

While cheating is a concern, there isn’t an easy solution.

“I know that teachers are going to do their best to be able to watch it [cheating] and hold kids accountable,” Paly Principal Brent Kline said.

“The good thing about this schedule is that students will only take up to two finals per day, and they are not back-to-back.”

“We are trying to lessen the load in the non-finals classes during those days so that you guys have more time to process and think,” Kline said. “You’re going to meet with those other classes, but it’ll probably look different.”

AP Environmental Science teacher Nicole Loomis is not in favor of the new finals schedule this year.

“It makes no sense that we can’t block the finals as we usually do,” Loomis stated in an email. “While the middle schools follow the same schedule, there is no reason they could not also do a finals block schedule in the last week of the semester.”

Final exams will also look different for many classes this semester. Many teachers have changed their plans to reflect the unprecedented circumstances of this year.

“Due to the pandemic and the shorter testing period, finals will be shorter and will not be weighted as heavily as in previous years,” Loomis said.

While finals have never been popular, this year’s apprehension is widespread, especially for freshmen.

“I don’t have a lot of background knowledge to go off of,” Reid said. “But starting high school online has been incredibly stressful in general and I’m not looking forward to throwing in another factor.”

“Why are there classes during the schedule that aren’t finals? That doesn’t make sense,” Parigi said. “In a time where everything is tumultuous, why are they changing the most stressful thing?”