Vibrant pastels and cotton candy-like clouds fill the screen as the camera slowly zooms and a soft melody starts up in the background. With over 100 million views in 24 hours, K-pop group BTS’s latest hit, “Dynamite,” broke YouTube’s record for the most views in 24 hours. Spending a total of three weeks at No. 1 on the Billboard Hot 100 songs chart, “Dynamite” remained true to its name as its popularity was, quite literally, explosive. 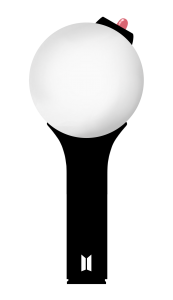 Many K-pop groups have distinct “light sticks” for their fans. This light stick is popular among fans of BTS. Art: Samantha Ho

Today, BTS remains one of the most prominent K-pop groups in the world with an astounding fanbase and worldwide recognition. On Oct. 15, BTS’s label, Big Hit Entertainment, went public on Korea’s Stock Exchange with a market valuation of $4.1 billion, making it South Korea’s largest IPO in three years. On Nov. 24, BTS made history again as they were nominated for a Grammy, making them the first K-pop group to ever receive a Grammy nomination. BTS’s continuous success and growth reveals the burgeoning popularity of K-pop around the globe.

Originating from South Korea, K-pop is a melting pot of music styles from all around the world, of course including their own traditional Korean roots. The songs are known to be catchy, and the accompanying music videos and live performances have mesmerizing choreography and iconic visuals. Each group brings its own style and personality, providing its followers with a personal experience.

According to senior Ellen Fang, the industry’s rapid growth around the world is in part due to its unique method of using social platforms such as Weverse, an app created by Big Hit Entertainment that allows fans to communicate directly with various K-pop idols.

“It [K-pop] definitely feels very family-like because the artists and the fans are more connected than they are in western music,” Fang said.

After hearing all of the positive remarks, I listened to today’s hottest K-pop groups’ new albums.

The four-person girl group debuted in 2016, when their captivating music videos and fun beats first caught the attention of many around the globe. Their 2018 hit single “DDU-DU DDU-DU” raked in over 1.3 billion views, making it the most viewed K-pop music video on YouTube.

Blackpink’s first-ever full album, “The Album,” was released on Oct. 2 and consists of eight songs, each with its own unique vibe. Tracks such as “Lovesick Girls,” “How You Like That” and “Pretty Savage” quickly broke chart records. Whether you are working out or relaxing at home, their songs are perfect for any occasion as their warm and bright melodies make you want to hear more. Blackpink’s steady, yet speedy, rise to fame can be explored more in depth in their new Netflix documentary, “Blackpink: Light Up the Sky,” which tells their story in a very personal way.

TWICE is a South Korean girl group composed of nine members. The group began in 2015 with their EP, “The Story Begins.” While they are not as well known as groups such as BTS, they have a considerable following within South Korea and abroad.

Their new album, “Eyes wide open,” was released on Oct. 26 and boasts 13 tracks which range from 80s pop-funk to EDM. A fan-favorite song from this new album is “I CAN’T STOP ME,” as it is uplifting with an energetic and upbeat rhythm that occasionally switches to R&B. If you are looking for something new and different, stream this song.

Consisting of 23 members ranging from their late teens to mid twenties, the unusually large South Korean boy group is split into four subunits, all of which have come together for the second time in their newest album. “NCT RESONANCE Pt. 1,” was released on Oct. 12, with 13 memorable songs to make their fans’ wishes come true.

One of their most captivating tracks from this new album, “Make A Wish (Birthday Song),” contains everything from hip-hop to R&B, making it highly addictive. The music video transports its viewers into a world of wonder as it delivers the music in the most colorful and entrancing way possible. The elaborate Bollywood-inspired choreography and beautiful visuals make watching the 4-minute, 9-second video worth every moment.

NCT’s innovation and creativity makes them a group to keep an eye on in the future.

K-pop: Song, dance and a sense of community