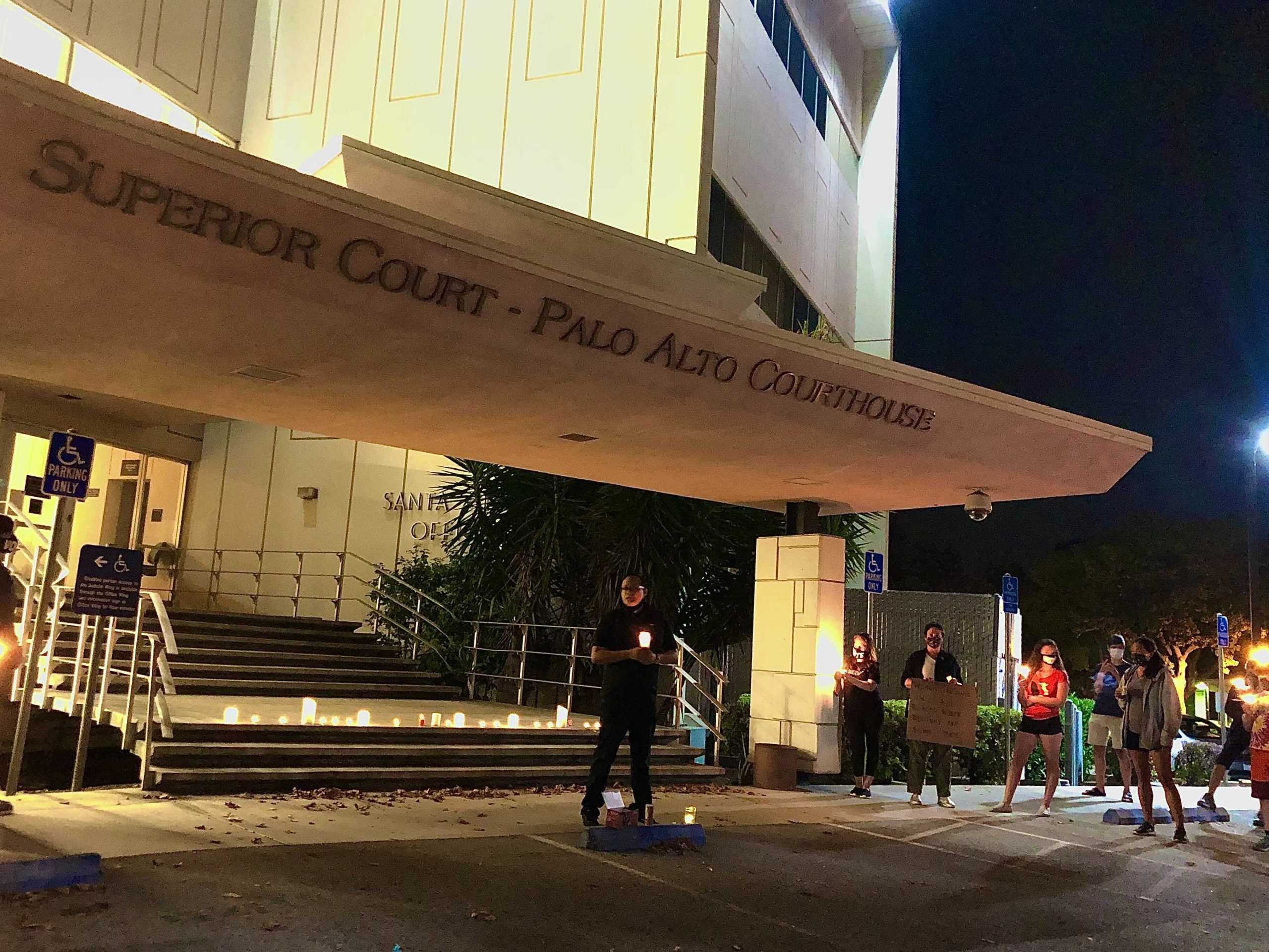 COURTHOUSE IN CANDLELIGHT— Palo Alto City Council candidate Steven Lee gives a speech honoring Ruth Bader Ginsburg’s life and legacy. “Now, there’s an open spot that can be taken and things that can be ruled out that might not benefit us,” Stein said after the event. “I think our rights are at stake.” Photo by Antonia Mou

The vigil, organized by the Palo Alto Action for Justice, began at 8 p.m. with a moment of silence followed by several speakers who expressed their gratitude towards Ginsburg’s lifelong fight for women’s rights and marriage equality.

Ginsburg, the second woman appointed to the Supreme Court, was a feminist icon and widely regarded for her contributions to gender equality in the U.S. At Roosevelt University’s 2017 American Dream Reconsidered conference, Ginsburg famously said, “There will be enough women on the Supreme Court when there are nine.”

“It’s really important for me to come out and show my support for everything she stood for,” Henderson said. “She’s so irreplaceable — there’s nobody like her.”

“It’s really important for me to come out and show my support for everything she stood for. She’s so irreplaceable — there’s nobody like her.”

As the first female Jewish Supreme Court justice, Ginsburg’s death on Rosh Hashanah, the Jewish new year, was especially significant. According to Jewish tradition, a person who dies on Rosh Hashanah is a Tzaddik, or person of great righteousness.

“I’m Jewish and I actually wrote my bat mitzvah speech about Ruth Bader Ginsburg, so she’s always been a powerful figure in my life,” Palo Alto High School sophomore Katherine Stein said. “I think she’s just made a really amazing impact on our world today, fighting for women’s rights especially.”

Vigil speaker and Palo Alto City Council candidate Rebecca Eisenberg recounted meeting Ginsburg, a circuit court judge at the time, in the early 1990s. Eisenberg had just made law review at Harvard Law School as one of the few women among majority male students, and was invited to a networking event with Ginsburg.

Eisenberg remembers waiting as her male peers asked Ginsburg questions, wondering if she would ever get a chance to speak.

“I was quiet and waiting my turn … and I thought I would never get a turn to ask her questions,” Eisenberg said. “And then, the judge turned to me and said, ‘Well, what do you think?’ I don’t think I’ve ever been so happy … I was just so shocked and happy that I didn’t have to fight to have a voice. In my mind, that’s really what Justice Ruth Bader Ginsburg represented not just for me, but for so many of us.”

“She worked until the day she died, and every day she worked, she did something good. If my life is half as productive as hers is, I will have left such a legacy.”

As the Senate fights over Ginsburg’s now-vacant seat, community members pledge to carry on her legacy through attending marches and protests, and continuing the fight for equality.

“She worked until the day she died, and every day she worked, she did something good,” Eisenberg said. “If my life is half as productive as hers is, I will have left such a legacy.”

Pro-choice, anti-action?: Why you should care about abortion