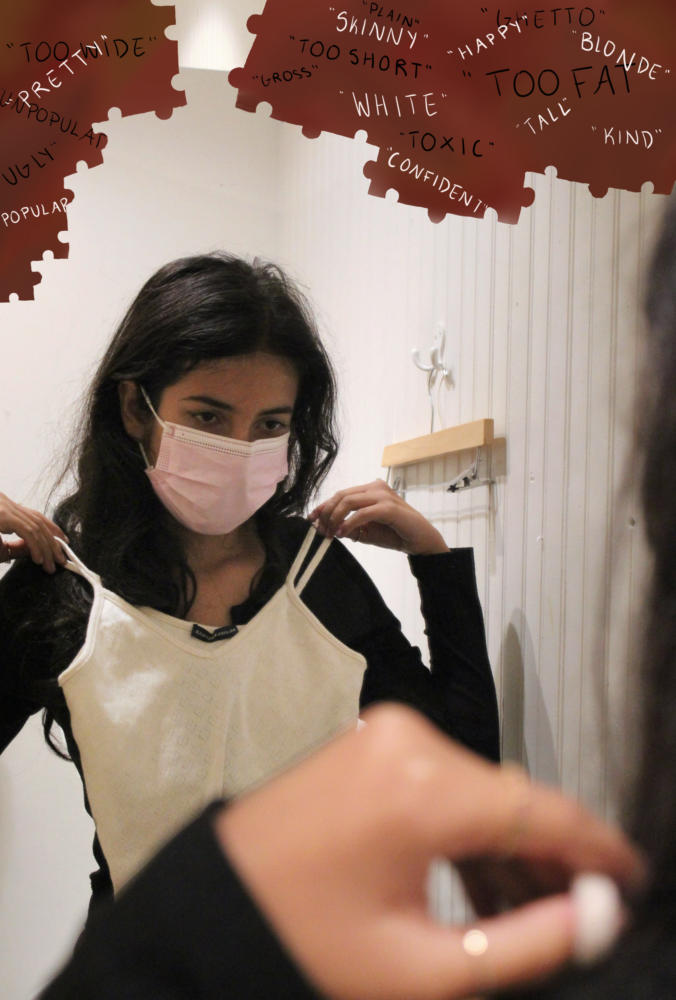 NOT YOUR MANNEQUIN — Paly sophomore Chista Irani sizes up a Brandy Melville tank top in the store’s dressing room as the mirror in front of her falls away to reveal a less attractive truth — the exclusive image and unethical hiring practices recently exposed by a scathing Insider report. “Brandy [Melville] has clothing that is often very cropped that sometimes makes me feel insecure to buy or wear,” Christa Irani said. “I feel like it’s created for a very specific body type.” Photo illustration: Anushe Irani (photo) and Alexis Chiu (art)

The Brandy Melville girl is tall and blonde. She dons cropped baby tees under oversized hoodies and garners thousands of followers on her perfectly filtered social media platforms. This image is plastered across the brand’s Instagram, a mosaic of small-sized white girls parading the brand’s one-size-per-style garments around California cities and beaches.

The Italian-based company was founded by father-son duo Silvio and Stephen Marsan in the early 1980s but rose to prominence following the 2009 opening of its Los Angeles location near UCLA’s Westwood campus. The brand has since skyrocketed in popularity among teens through its curation of a distinctive West Coast aesthetic.

“The brand is so popular and has such a big influence that it’s easy to spot one of their signature items of clothing in public,” Palo Alto High School Instyle Club President Ariana Ebrahimi said.

With a store across the street from Paly, the brand’s influence on students has been widespread for several years but has recently faced backlash over its one-sized clothing, unprofessional hiring practices and “toxic” messaging.

Despite its popularity, Brandy Melville is no stranger to controversy. Many criticize the brand for a perceived lack of size inclusivity, racist and fatphobic messaging, as well as alleged unethical hiring practices. According to a jarring Business Insider report by Kate Taylor in September, over 30 Brandy Melville staff members claimed higher management hired and fired employees on the basis of height, weight and race. The article also alleges the company’s hiring process includes approval of the applicant’s appearance and Instagram account, with some employees being required to send daily outfit pictures to CEO Stephen Marsan for approval.

Verde Magazine reached out to Brandy Melville, who declined to comment.

“Girls with a bunch of different body shapes who couldn’t fit into their clothes felt bad about themselves.”

The local Town and Country Village store is not exempt from these allegations. Though it is a coveted place for Paly students to work, employees describe the hiring process as unusually quick.

Such was the case for Sara, an employee at a California location whose name has been changed to protect her identity.

“Normally, I would expect them to say something like ‘We’ll reach out if you got the position,’” Sara said. “But once I was done with my interview, they were just like, ‘We’d love to hire you.’ And that whole process took about a week.”

“I know there’s so many rumors and people assume the workers are [judgemental], but at least all of my co-workers right now are really genuine and nice,” Sara said. “We’re a smaller community, but we support each other.”

As the brand’s controversy has grown, increasing numbers of students have also been speaking up about the unrealistic standards Brandy Melville sells to teen girls. Most prominently, its infamous one-size-per-style sizing policy has been controversial, with many students feeling it promotes unrealistic body image standards.

Ebrahimi, a former Brandy Melville shopper, weighs in on the impact of the brand on her psyche.

“It [Brandy Mellville] took a toll on society’s standards for girls since Brandy was such a popular brand,” Ebrahimi said. “Girls with a bunch of different body shapes who couldn’t fit into their clothes felt bad about themselves because they didn’t fit into this brand that everyone liked.”

For some, the Brandy Melville clothes they wore as middle-schoolers no longer fit as they matured throughout high school. Students describe Brandy restrictive size selection’s adverse effects on their mental health as they developed into older bodies.

“It [the brand] is advertised to grown women who are very small, but, in reality, it can mostly only fit young girls,” senior Giada Parigi said. “If you start off wearing it, you kind of have a mentality to stay that size. And maybe when you can’t fit that anymore, when you grow up, which is natural, then you feel kind of like sh-t.”

“It makes people feel like they have to have a certain body type to buy Brandy’s clothing.”

“I don’t think this [the sizing policy] is fair to many people because no one has the same body type,” Irani said. “It also makes other people feel like they have to have a certain body type to buy brandy’s clothing.”

Parigi said that the lack of larger clothing sizes sends a clear message about what customers the brand values.

“The brand and its sizing policy reinforces this unrealistic beauty standard, which is being peddled by a group of men in charge of Brandy Melville,” Parigi said.

The avalanche of backlash against company policies in recent years begs the question: What makes Brandy Melville so popular?

Some students cite the collection of trendy clothing offered at affordable prices.

“I think everyone shops there because they have t-shirts and they’re easy [to get] and stylish and inexpensive,” senior Julia Tri said. “The one thing is it’s hard to find stuff that can fit you.”

“I think that Brandy Mellville is popular because they offer clothing that is appealing to teenage girls,” sophomore Chista Irani said. “They have basic clothing that you can match with a lot of stuff and they keep up with the trends among teenage girls.”

“Its sizing policy reinforces this unrealistic beauty standard, which is being peddled by a group of men in charge of Brandy Melville.”

Others also believe the exclusive sizing policies further play into their marketing scheme as a sought-after brand.

“The more exclusive something is, the more hype and attention it is around it,” Parigi said. “That’s why luxury brands are so eye-catching and mesmerizing. It’s an exclusive group where only rich people have the means to afford it. And this is an exclusive group, where only very thin people can wear the clothes.”

Brandy Melville’s marketing strategy is unique in today’s fashion scene and may also play into the brand’s appeal to young shoppers. The company refrains from Internet ads, and shuns the use of professional models. Items never go on sale in-store, and their return policy is strictly store-credit only.

In response to ongoing criticism, Brandy Melville has recently taken steps to make its clothing inclusive of more body types. “Brandy is finally starting to head down that road of being aware that they would have more customers if they decided to do different sizes [of clothing],” Sara said. “So I think we have had a bad reputation but we’re trying to go down the right road.”