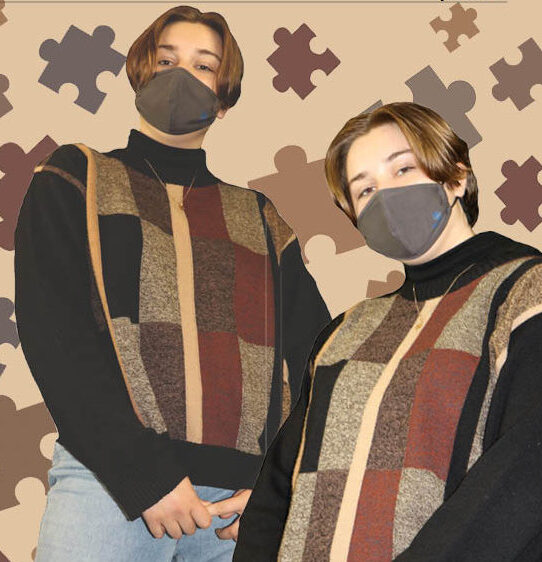 “In March 2020, I started this pandemic out as a bisexual woman, my politics were centrist-liberal and I think there’s a lot to say about a year and a half of not presenting for society and being alone with your own thoughts,” Palo Alto High School senior and stand-up comedian Phoebe Berghout said in a re-enactment of her performance during an interview with Verde. “It’s also a lot of time to watch lesbian period dramas.”

Berghout is a Paly student who spends her free time writing and performing stand-up comedy. After over a year of COVID-19 restrictions inhibiting her ability to perform in front of crowds, Berghout has returned to stage with her reflective, personal performances that bring a new perspective to the genre of stand-up.

Berghout always keeps her stand-up notebook on hand, so whenever something thrilling or embarrassing happens to her, she can document that moment in hopes of crafting a joke about it later to amplify its humor.

“I like to make a lot of self-deprecating jokes,” she said. “I think it’s fun to make jokes about things in your life that aren’t going great. I’m my own source of inspiration.”

After compiling these jokes, Berghout looks for common themes in her vignettes to connect these isolated moments in her life into a single, cohesive stand-up routine to perform.

“People have their image of a comedian — a white, straight guy — and that is the face of comedy,”

Because personal anecdotes are the inspiration for most of Berghout’s work, she often finds presenting these jokes to crowds nerve-wracking.

“I’m vulnerable in front of a lot of strangers, which makes me get really freaked out,” she said. “But none of that matters as soon as you get your first laugh.”

Berghout said her experiences performing stand-up have allowed her to accept imperfections and mistakes in her work.

“I’m learning how to be okay with the fact that not every time you get a laugh,” she said. “Some jokes fall short and people will not find them hilarious, and that’s okay.”

Because comedy is a male-dominated industry, Berghout feels constant pressure to break the stereotypical image of a comedian.

“People have their image of a comedian — a white, straight guy — and that is the face of comedy,” Berghout said. “People don’t necessarily think that anything that doesn’t fit that mold is going to be as funny. We don’t even realize how humor has directly been associated with men and continues to be in our society.”

“Mae Martin makes really funny jokes about gender and being gay and all that good jazz and delivers it in a really, really good way,”

Berghout looks up to many comedians like Mae Martin and Sarah Silverman for their witty takes on more serious topics that she can relate to.

“Mae Martin makes really funny jokes about gender and being gay and all that good jazz and delivers it in a really, really good way,” Berghout said.

Before senior Emma Joing saw Berghout’s performance at the Palo Alto Teen Arts Council Open Mic on Oct. 8, she had not been interested in stand-up comedy because of the perception that it was based on stereotypes and offensive jokes.

“It [Berghout’s performance] really resonated with me because the little stuff I knew about stand-up was men making offensive jokes,” Joing said. “To hear a different perspective and have one of my first experiences in stand-up be that other perspective of women making actual, respectful, funny, well-thought-out jokes [was great].”

Through her unique perspective, Berghout uses comedy to tackle serious topics that she cares about such as gender, sexuality and climate change.

“Comedy is good at making challenging and emotional topics feel more approachable,” she said. “The biggest thing that I look for when I’m on stage is to make people uncomfortable and build tension then to break that with a joke — it’s the best feeling.”