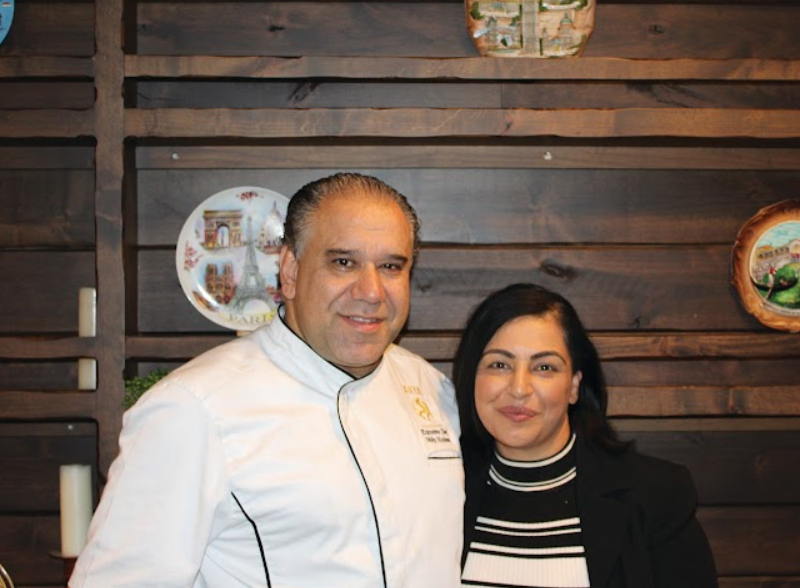 DINING WITH THE HASHEMIS — Mike and Fera Hashemi, owners of Arya Steakhouse, stand in their luxury dining room in downtown Palo Alto. "We plan on being here a long time," Fera Hashemi said. "But we wanted to make sure we were offering something different." Photo: Nadav Sternheim

Stepping into Arya Steakhouse is like being whisked from downtown Palo Alto to the Middle East. Walls are lined with delicate ceramic teapots and plates, colorful, ornate rugs hang above the neatly set tables, and the sweet sound of Persian music fills the air.

The family-run restaurant, which opened on University Avenue on Aug. 9, serves authentic Persian food seven days a week for lunch and dinner.

Owners and partners Fera and Mike Hashemi originally opened Arya Steakhouse in Cupertino in 2007, followed by a second location in Redwood City in 2012.

When the restaurant leases ended right before the coronavirus pandemic hit, the Hashemis decided to close down the two previous locations and find a new, final home.

“Palo Alto was a great choice because it was in the center of Cupertino and Redwood City,” Fera Hashemi said. “We figured it’s a meeting place for us and our guests.”

Though there are many other restaurants in downtown, Fera Hashemi said that the restaurant has found its niche.

“I feel like University was so universal because it had every type of cuisine, but there was never Persian food, and there weren’t steaks,” Fera Hashemi said. “So for us, it checks all the boxes to introduce something different to Palo Alto.”

The Hashemis’ cultural roots and love of Persian cuisine brought them together and inspired Arya Steakhouse.

Mike Hashemi grew up in Iran, where he learned how to cook traditional Persian food from spending time with his mother. After leaving Iran during the Iraq War, he traveled through Europe before finally moving to the United States with a wealth of cooking knowledge and experience.

“There wasn’t a fine dining Persian restaurant in Palo Alto, and that’s one of the biggest reasons we chose to call it home.”

While working in a Persian restaurant in Orange County, he met Fera Hashemi, who had been living in the U.S. since immigrating from Afghanistan at the age of six.

“I was the assistant manager, and he came in to help for the grand opening,” Fera Hashemi said. “We met the first night there, and we’ve been together ever since.”

Although Arya Steakhouse is based around Persian culture, Fera Hashemi doesn’t want to limit the restaurant to just one cuisine. The menu is entirely halal and includes vegan, vegetarian and seafood options, but it is also diverse in its types of food.

Fera and Mike are not the only Hashemis involved in the business.

Their eldest daughter is in charge of the dessert menu and their middle son worked at the restaurant six days a week before he moved to Orange County. Fera Hashemi also plans for her youngest daughter to begin helping out soon.

Fera Hashemi said that the response to Arya Steakhouse so far has been positive.

“We filled a void,” Fera Hashemi said. “There wasn’t a fine dining Persian restaurant in Palo Alto, and that’s one of the biggest reasons we chose to call it home.”