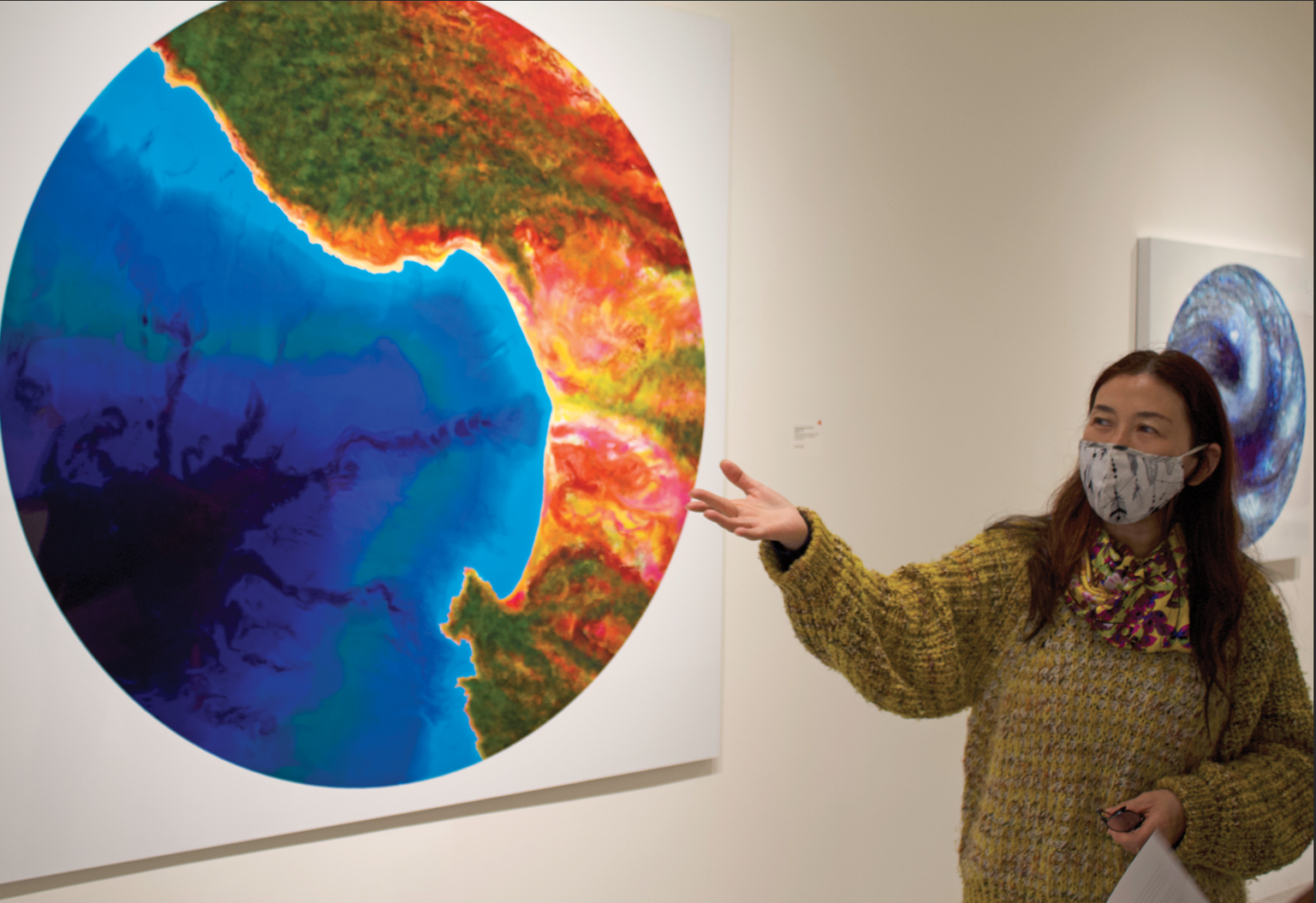 ART ADVOCACY — Qualia Contemporary Art director Dacia Xu stands in front of one of the paintings from John Sabraw’s “Hydrophilic” exhibit. Xu chose to showcase Sabraw’s work after seeing the multifaceted approach of the exhibit. “I hope to present a variety of exhibitions that are socially, intellectually, aesthetically, emotionally and spiritually engaging,” Xu said. Photo: Olivia Milne

Circular artworks, covered in splotches and waves of vibrant color, line the walls of a quiet University Avenue gallery, luring viewers out of the noisy street and into the world of the exhibit. The confluence of activism, science, and art shines vividly in Qualia Contemporary Art’s latest gallery exhibition: “Hydrophilic.” Open to the public until Dec. 3,  the exhibit features a series of mounted circular works depicting dynamic waterways created by renowned environmentalist and artist John Sabraw.

Sabraw’s artistic journey began with a focus on painting still lives and landscapes. However, he felt frustrated and dissatisfied with these styles.

“I had been a hyperrealist for most of my career, but I knew it wasn’t working,” Sabraw said. “I was making the shift where I was trying to talk more about where culture and where society was headed with regards to natural resources, sustainability, and everything.”

When Sabraw visited the polluted remnants of an acid mine drainage site in Ohio, he realized the pollution contained a chemical compound used by many artists: iron oxide.

“This [iron oxide] is the thing that we’ve made paints with since we were making cave paintings, and I was like, maybe I can make paints out of this.”

Though inspired, Sabraw was unsure about how to use the iron oxide paints in his work. On one fateful day, Sabraw felt especially frustrated with his lack of progress and knocked over a jar of acrylic paint in his studio.

“I had a little teenage angst moment and then just like knocked over all the jars,” Sabraw said.

Sabraw knew the spilled acrylic paints were nearly identical to the ones he created from the iron oxide pigments, and when he returned to his paint-covered studio weeks later, he had a moment of clarity.

“The breakdown and spilled paint happened at almost the exact same time that I was messing with these [iron oxide] pigments,” Sabraw said. “The two bodies of work ended up merging and that’s where I ended up with the round chromosomes that I’m doing now.”

This happy accident showed Sabraw that these pollutant-based paints could be used as a substitute for traditional store-bought ones, and demonstrated the beauty and river-like qualities of spilled inks.

“When people first come in, they look at the artwork with some curiosity, but after they watch the video about his process, their facial expressions change and they marvel at what John has done.”

Sabraw, with funding from the U.S. government, set out to create an environmentally friendly water processing plant to automate the collection of his iron-oxide pigments whilst cleaning polluted waterways all over the country.

“It [iron oxide] comes out as a beautiful pigment, which then has a market value,” Sabraw said. “We can sell it and selling that pigment generates not only enough money to run the plant, pay for the jobs that it creates and everything else, but it has a small profit, and we can use that small profit to clean up even more streams.”

Sabraw is currently working with a team of engineers and environmentalists to begin the restoration of these streams on a larger scale.

“Within just a year or two of a plant being up there, a whole seven miles of stream should be back to full aquatic health,” Sabraw said.

Inspired by the idea of self-sustainability, Sabraw created the “Hydrophilic” exhibit. The exhibit contains paintings shaped as circles in order to allow for a vast array of different interpretations by the viewer.

“I want them to look at the artwork and initially have that first emotional and psychological response … which is entirely up to the viewer depending on their life experiences.”

Sabraw’s unique work and emphasis on activism caught the attention of Qualia Contemporary Art’s director Dacia Xu. Xu was originally drawn to the deep environmental message behind Sabraw’s work, and has seen viewers react to this aspect of his work as well.

“When people first come in, they look at the artwork with some curiosity but after they watch the video about his process, their facial expressions change and they marvel at what John has done,” Xu said. “Visitors have told me that they love the beautiful paintings and they think the show is very meaningful as it raises people’s awareness about our environmental issues.”

When coming to a new community, Sabraw feels it is important to collaborate with local experts in the area in order to enrich his work and keep his work as authentic as possible. For “Hydrophilic,” he worked with Ashley Beckwith, an MIT doctorate student in mechanical engineering, who was doing her own environmental work with pine trees in Monterey Bay.

“I made a painting of the Monterey coast using her [Beckwith] plant material in my paint mixtures,” Sabraw said.

Sabraw said his interactions with local experts were pivotal in creating impactful and authentic work, like his “Hydrophilic” paintings.

“Because I’m not a native to California, I’ve tried to make sure that I find people who are putting in their hard work in their own efforts to fight climate change,” Sabraw said. “And so the two paintings that are the results of the two different collaborations in the Bay Area.” 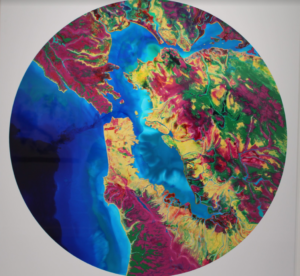 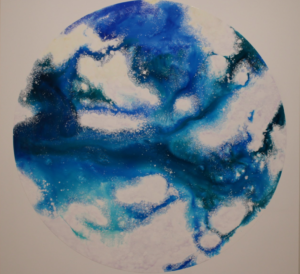 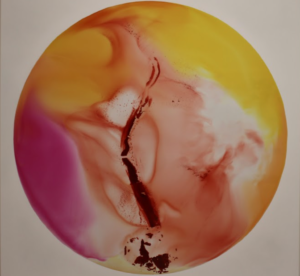 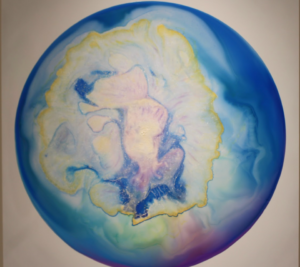 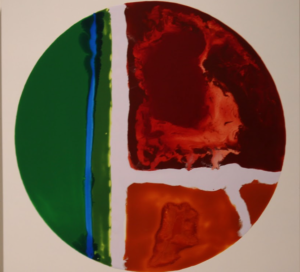 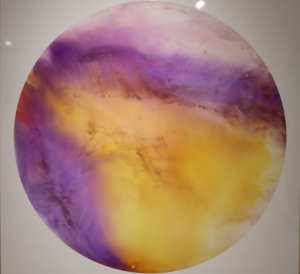 CREATING CIRCLES — These circular paintings are a part of John Sabraw’s “Hydrophilic” collection and aim to depict various aspects of life. “You have a splash of colors, you got some bright blues,” Sabraw said. “You have some really interesting areas where things are kind of mixing and flowing.” Specifically. Sabraw’s “San Francisco Bay” painting (top left) was inspired by local activists who were working on recycling plastics in the Bay. “I painted the San Francisco bay because they were engaging with green waste in the area,” Sabraw said. “And dealing with all of these incredible plastics that are being deposited in the bay area as waste.” Photos: Olivia Milne