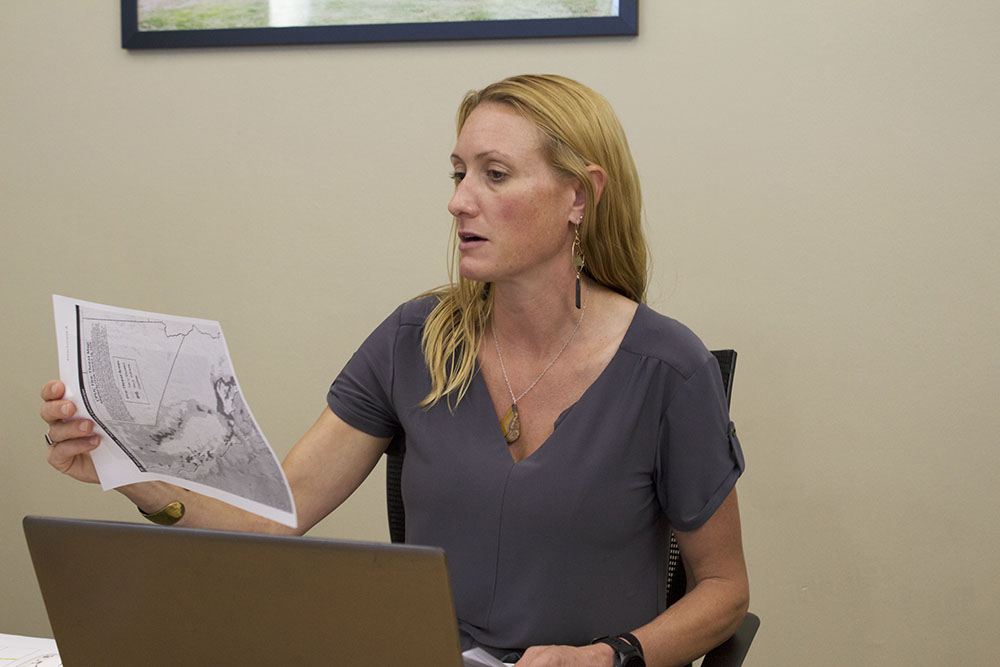 MAP OF DESTRUCTION Palo Alto Utilities media coordinator Catherine Elvert shows a map of areas considered to be at high risk of fire. She says one thing residents can do to prepare for fire is to be informed or become a volunteer. “Hopefully they’ll be here on the ground, to help themselves, to help their neighbors and help the city in some of our response efforts,” Elvert says. Photos by Emma Donelly-Higgins

Where the wildfires are: Preventing fires in Palo Alto’s foothills

“During the large fires, the air quality is horrible,” Palo Alto Fire Department Chief Kevin McNally says. “So your throat is scratchy. Your eyes are burning, and we work 24-hour shifts.”

McNally fought the Butte Lighting Complex Fire of 2008, and recalls his experience containing one of the 25 fires.

“It was 115 degrees at the hottest points of the day,” he says. “It’s an experience that hopefully we’ll never really get here in Palo Alto. But if we do need it, we will send our crews out that have gotten incredible experiences elsewhere that they can bring back here and protect us.”

Since the report’s release, many departments in the City of Palo Alto are focused on reducing and preparing for the possibility of disaster.

The Palo Alto Utilities Department is primarily focusing on the foothills, trying to prevent contact of vegetation with power lines running overhead.

According to communications Manager, Catherine Elvert, the need for a new plan was partly caused by legislation passed in response to the 2018 Chico and Paradise wildfires.

“Our message is not that not that we won’t try our best, but … you’re gonna have to, unfortunately, deal with the reality.”

The plan includes increased inspections of infrastructure and monitoring of plant life near power lines. Tom Ting, a leading figure in the new plan, has suggested moving some power lines underground. In other areas of the park, PAU aims to move the power lines away from trees that could catch fire.

“Right now, the power lines go cross-country above Foothills Park,” Ting says. “Can we relocate them so that they are a little bit more accessible and more away from trees? Things like that to try to make it a little bit safer.”

But Office of Emergency Services Chief Kenneth Dueker warns residents that the fire risk is not exclusive to nearby houses. Because of high winds and embers carried from fires, houses that are not in the Wildland Urban Interface may also catch fire, meaning residents must work to protect their own properties.

Palo Alto Utilities is working closely with the Palo Alto Office of Emergency Services, which also works on vegetation control.

OES has considered using goats to graze on the grass, naturally preventing overgrowth that could potentially accelerate the spread of a wildfire.But, according to Dueker, wildfires are usually sparked by humans, with the majority of them originating only 30 feet from a road.

“[It] could be a spark from a car, could be a negligent cigarette out the window, could be broken glass from a bottle or a car crash,” Dueker says. 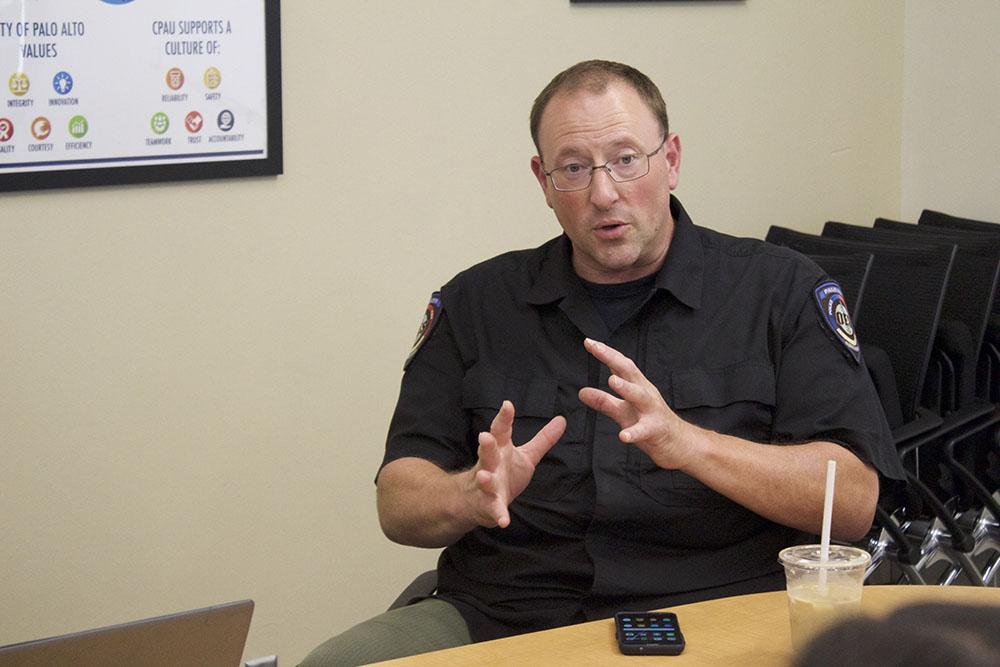 DANGER AT A DISTANCE Even residents far from fire hazards must be careful. Office of Emergency Services chief Kenneth Dueker discusses the risks that a fire in the Foothills poses for Palo Alto residents. “An ember floats towards your house, your house is at risk, Dueker says. “The risk is, the ember gets sucked in the little vents in the eaves of your attic, and then … it could cause a major fire.”

Car accidents pose a larger threat of fire with broken windows and headlights that, when positioned at the right angle in relation to the sun, could ignite.

In the case of fire, residents must also be aware that transportation routes may be cut off, and emergency personnel who do not live nearby may not be able to get to Palo Alto. This means residents will have to take on some responsibility of their own.

“Our message is not that we won’t try our best,” Dueker says. “But if we can’t get key people here, you’re gonna have to, unfortunately, deal with the reality.”

However, residents can take some emergency responses into their own hands. Palo Alto has various training and volunteer programs, as well as information pages and ways to stay in contact with your local emergency team.

“One of the benefits of having a local community emergency response team and local emergency services volunteers is that hopefully they’ll be here on the ground, to help themselves to help their neighbors and help the city in some of our response efforts,” Elvert says.

Bucks’ recipe for a disaster