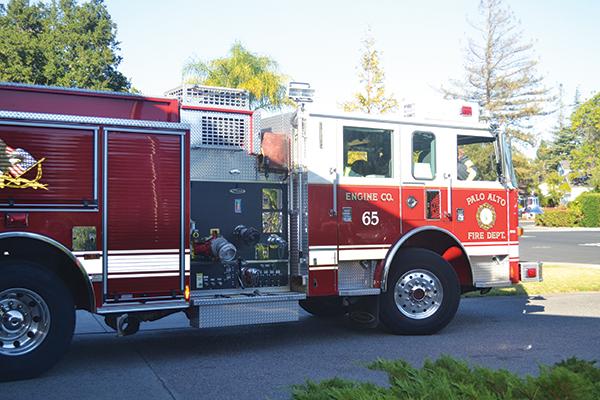 Fire Station No. 5’s fire engine leaves the garage to respond to a call.

Shafts of sunlight make their way  through high windows, falling on an impressive red and silver figure. “Palo Alto Fire Dept.” is etched around the city emblem and painted on the side. This fire engine, kept in a large concrete garage, is the centerpiece in the building a select group of heroes call home.

Fire Station No. 5 is in all functionalities a house, complete with living quarters, bathrooms, kitchen and living room. It is here that a portion of Palo Alto’s firefighters take up residence, allowing  themselves to be available at any time, day or night.

A DAY IN THE LIFE OF A FIREFIGHTER

Michael Simbulan, a firefighter of two months, starts his day at 7 a.m. in Fire Station No. 5 when he gets the newspaper and starts making coffee for himself and his crew. By 8 a.m. he has checked their gear and the fire engine, ensuring that all parts are in their proper place, safely poised and ready to go in case of an emergency. After a morning meeting and breakfast with others working the same shift, they proceed to start their chores. 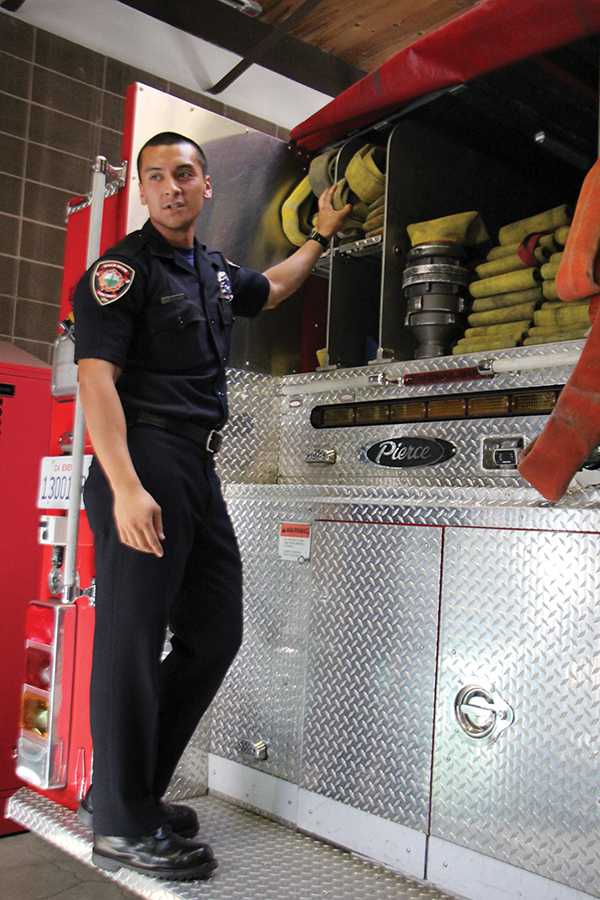 Simbulan showcases the fire hose used to put out fires. He checks compartments like these on the fire engine every morning to make sure it’s ready to go.

After the household duties are done, the firefighters train. A tower facility at Stanford University allows them to run different scenarios involving burning buildings and different types of rescues. At around 4 p.m., after lunch break, there is an hour designated for physical training and exercise consisting of the CrossFit regime, popular among the firefighters. Paired with a workout area featuring ellipticals and treadmills, CrossFit keeps the firefighters in great shape. However, each day’s schedule is tentative, due to the spontaneous nature of the job — they have to be ready to drop everything upon recieving a call.

“While we have [our] plan, we are also running calls; people call 911 all the time,” Simbulan says. “Everything could get pushed back [and there] might be something that we can’t get done.”

These calls emphasize the necessity of a comprehensive training routine.

Firefighter Lee Taylor, who retired two years ago after 31 years of service, can attest to the adrenaline rush of a 911 call.

“When the call comes in there’s anticipation — you get an adrenaline rush while you’re going there — you can see the smoke while you’re talking to dispatch,” Taylor says. “There’s a lot of excitement followed by a lot of physical work, and it’s ever-changing as you continually gather information as the fire proceeds to modify your attack.”

According to Taylor, training is critical to ensure the readiness and efficiency of firefighters. They cover a wide array of scenarios to prepare them for any situation, ranging from water rescues to hazmat certification, the latter of which certifies firefighters to deal with dangerous materials and substances. Besides the taxing physical element of being a firefighter, Simbulan finds gratification through the more humanitarian aspect of the job.

“I wanted to become a firefighter because I liked how it’s positive — something where you can help others,” Simbulan says. “On top of that, they [firefighters] were doing something that wasn’t the same thing everyday. It was something different and challenging. I get bored easily, I like to be challenged, and you don’t really know what to expect. To me everyday is pretty exciting, because I’m always learning something new.”

Firefighter Taylor also enjoyed the challenges that are inherently part of the job description.

“The problem solving was always an enjoyable challenge,” Taylor says. “To help [people] you have to solve problems because it’s rarely just a simple problem. It’s out on a freeway, or people are trapped in a car; there’s always something complicating the care.”

Taylor has been called upon to help in many situations over the duration of his career, some very unexpected. Once, he delivered a baby.

“I did CPR and you watch a lot of people die in your career, but I got to be there and deliver one baby,” Taylor says.

Whether on their way to a fire or to help with a medical call, firefighters shoulder the responsibility of helping people with problems they cannot deal with on their own.

“We are prepared and willing to help someone in their situation, whatever situation, [when] they can’t handle it themselves,” Taylor says. “That’s why people call 911, when the little fire becomes big, or grandma has a heart attack and they don’t know how to help. To me it means being professional at all times and in all circumstances, and I was always honored with the trust that people put in us when we come into their homes and help them with their family, friends or relatives.”

Enter the Fire Station No. 5 garden, and you will find a wide array of vegetation and life. This is where former Firefighter Lee Taylor began to grow chilli peppers. Since 1994, when he went on vacation and returned to find an overgrowth of chili peppers, he has been harvesting them and creating his own hot sauce, the Palo Alto Firefighters Pepper Sauce. It started as a simple treat for himself and his friends, but soon became commercially successful.

“When I came back [from vacation], I had more peppers than I knew what to do with so i made a pepper sauce because I like hot spicy sauce,” Taylor says. “I gave some away and everybody liked it. … I just made it for myself and for my friends and made it the way I liked it, with no intent of selling it.”

The proceeds from the Pepper Sauce go to the Palo Alto Firefighters Charitable Fund, which has given 101 college scholarships to Palo Altan teens. 100 percent of the funds generated by the pepper sauce goes toward this charity, which was started by Taylor and in 2003 awarded its first scholarships.

“In 2003 a sequence of events occurred in my life that made me very thankful for where I was and what I was doing,” Taylor says. “It was a very reflective time in my life, and I wondered what I could do to give back.”

At first he raised money for his fund by participating in long distance bike rides. However, it wasn’t a feasible way to raise money — it was just too dangerous.

“During training rides I was getting hit by cars,” Taylor says. “I got hit by 3 different cars during a couple months period of time. The last one [was] relatively serious, and my wife said, ‘Hey we have kids, a mortgage, you have a career [and] you can’t die on the bike.’”

So, taking the advice of some fellow firefighters, he switched to selling his pepper sauce instead. Scholarships are awarded based on an application that only Palo Altan teens can fill out.

This sauce is sold in multiple locations around Palo Alto, including Philz coffee, and can also be shipped nationally or even internationally, as far as New York and Ireland. A new flavor, XX Habanero, won a SCOVIE award last February. The SCOVIEs, named after the Scoville scale (which measures the spiciness of chili peppers), have become the most prestigious assessment of spicy foods.

If that is not enough, many testimonials from across the world are featured on the Palo Alto Firefighters website praising the recipe and encouraging others to test their taste buds with this fiery sauce.

The sauce ranges from $6 for an 8.5 oz bottle to $24 for a 64 oz bottle. Other options include a choice between the classic recipe or the new Habanero flavor, with chili pouches for $10.