When the Moon Hits Your Eye 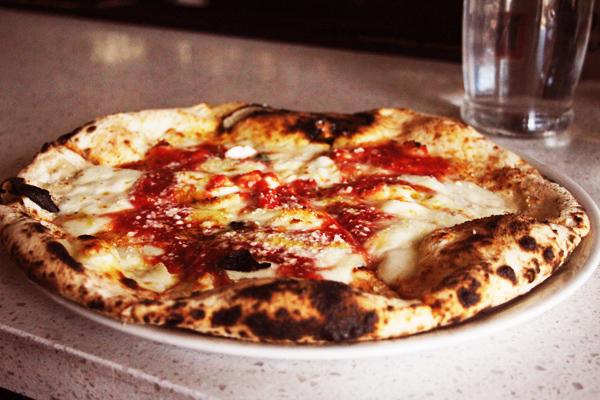 Marching to the pounding rhythm of its own tune, Terrone — a new restaurant at 448 S. California Ave., Palo Alto — oozes cutting-edge ambition with its monochromatic tiling and sleek decor, making one thing clear: This is no homey Italian restaurant dishing up a healthy serving of cheese and congeniality. Determined not to be typecast in the style of Buca di Beppo, it covets the role of the slick newcomer, and its high prices and contemporary design certainly make it a contender.

Its staff already has its sleeves rolled up for battle, armed with smiles and a non-stop dedication to diners that extends even to the minute details of how to time the arrival of a pizza with pasta or appetizers. Meanwhile, Maico Campilongo, one of three owners along with brother Franco Campilongo and chef Krystryan D’Angelo, greets customers with a stream of hugs that, intentional or not, make everyone who enters the restaurant feel like family.

Yet, and perhaps not surprisingly for a restaurant that opened in February of this year, Terrone misses some of its cues, leading to an unbalanced dining experience that makes each course feel like a meal at a completely different restaurant.

Although the servers have good intentions, their checkups are sometimes so regular as to make us feel smothered, and their unfamiliarity with the menu would make any diner hesitate. When we asked one waiter for recommendations, he seemed caught off guard and we fumbled through an uncomfortable exchange before finally deciding on the burrata cheese ($10), an appetizer of grilled eggplant, cherry tomatoes, basil, olive oil and crostini topped with fresh cheese made from a mixture of mozzarrella and cream.

The presentation is far more inspired than the food itself. Plated with a flower of eggplant slices, it features a pile of unappetizingly cold and stringy coagulated clumps of underseasoned cheese and none of the runny, creamy mozzarella that is a hallmark of fine burrata.

On the other hand, the fava bean and broccoli rabé with pepperoncino calabrese ($10), another appetizer, rises to the challenge in a way that the burrata simply can’t compete with. Moderately spiced with pepper and chili oil, it offers a distinctly Asian-inspired twist that, while at odds with Terrone’s goal to impart tastes of Naples, is still delicious.

The grilled romaine salad with avocado and cherry tomato ($10) makes its way back to Italy, and with good timing. The grill imbues a slightly smoky flavor that pairs well with the lemon dressing — although we do wish there had been more of the salad.

A main course pasta dish seemed in order, so we ordered the much-recommended scialatielli ($17) — a dish of thick, long spaghetti with mushrooms, olive oil, and rosemar — flaunts an  unreasonable price given the small portion of pasta served. The mushrooms infuse the homemade noodles with complex fungal undertones, but their density is slightly off-putting, leading to an overly spongy, rubbery bite.

Of course, a visit to Terrone isn’t about the appetizers, salads or any of the menu’s other distractions: it’s about the pizza. Clearly visible even from the street is its Italian-shipped wood-fired pizza oven, its fiery innards flickering faintly. Equally impressive is its designation as a certified Associazione Verace Pizza Napoletana pizzeria, bestowed upon it by the VPN and the Italian government for its dedication to Neapolitan pizza making.

“We follow the same rules that used to be followed 300 or 400 years ago in Naples with the modern yeast and the Caputo flour, and the way we work,” Campilongo says about the designation.

So of course, the pizza seemed like the perfect opportunity for Terrone to strut its stuff.

Terrone’s crust is consistently the highlight of any of its pizza; the thin, lightly charcoaled dough screams complex, yeasty flavors. From there, however, it becomes largely a hit or miss experience that made enjoyable dining overly dependent on an ability to decipher the minimalist menu.

The quattro stagione ($16), a pizza divided into four quadrants with prosciutto, artichoke, olive and mushroom adorning each quarter respectively, is nothing special. The blandness of the San Marzano tomato sauce quickly faded in our memory, while the toppings are scarce — who knew mushrooms were such an endangered species.

Perhaps that is for the best, because on the other end of the garnish spectrum, the sauceless tricolore ($18) makes the prospect of abundant toppings a cause for alarm. Its appeal to deconstructivism lost on us, we stared, bewildered, at the pile of arugula, cherry tomatoes, and cold buffalo mozzarella that sat in the middle of our pizza, an island surrounded by a sea of crust.

The safest bet, a margherita pizza ($14), plays it simple, relying on an age-old tradition of velvety tomatoes and creamy cheese. As well-executed as it was, it also served as a reminder that the restaurant’s ability to deliver on the classics sometimes gets lost in translation when it came to the more high-concept dishes.
This sentiment is echoed in the dessert menu, which Terrone executes admirably, relying on tried-and-true Italian favorites. Under a fervent belief that a genuine Italian restaurant can be judged by the quality of its gelato and tiramisu, we felt it was time to let Terrone wow us.

And finally, three acts in, it really did. The tiramisu ($8) has exactly the creamy, consistent texture that we had looked for in the burrata, with a subtle but developed hint of rum and a light, not-too-sweet flavor. Characteristic of its name, which in Italian means “pick-me-up,” the tiramisu was the kind of ending that made amends for any previous disappointments. The vanilla gelato affogato al caffe ($8), fresh coffee poured over two scoops of vanilla gelato, evenhandedly manages the demands of the competing flavors, resulting in a sophisticated and satisfying take on coffee ice cream.

The true winner, however, is the caramel gelato with sea salt and olive oil ($8). As rich as the caramel is, the olive oil manages to balance out the sweet intensity. Kingdoms could be conquered on the strength of Terrone’s gelato alone, and the verdict on the sea salt’s presence is in, making it official: from here on out, any unsalted caramels should be rounded up and promptly punished. Our appreciation for the dessert was similarly mirrored by fellow diners; because of its popularity, the restaurant is known to run out.

Three-month-old Terrone is a toddler of a restaurant, the kind that, despite its dreams of adulthood, still sometimes trips over itself and lacks judgment calls. Its desire to be adventurous is a stumbling block, but if you trust your gut and order the classics, Terrone will deliver. Beneath the edgy exterior and sparsely described menu lies an inexperienced but ambitious new addition to California Avenue’s diverse and vibrant dining scene.