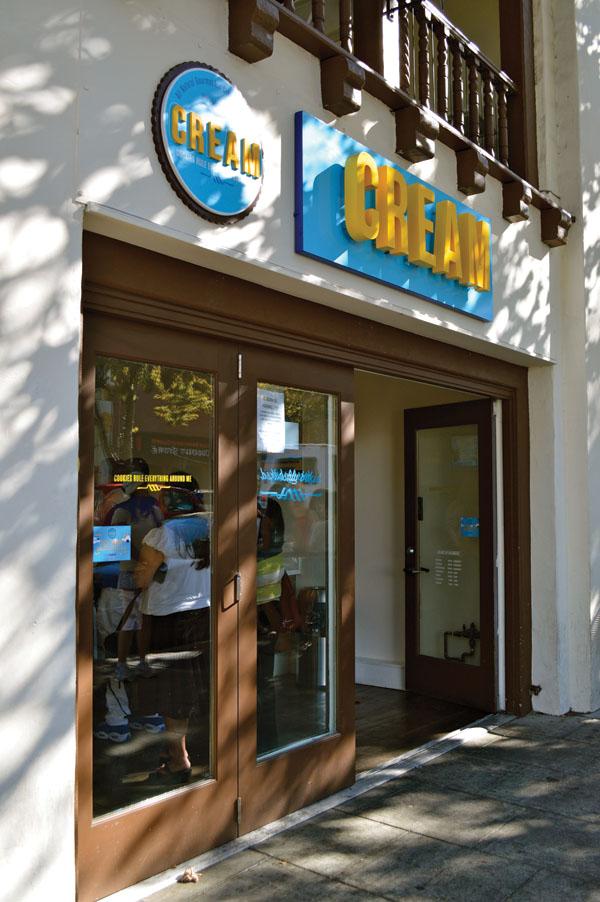 We All Scream for Ice Cream 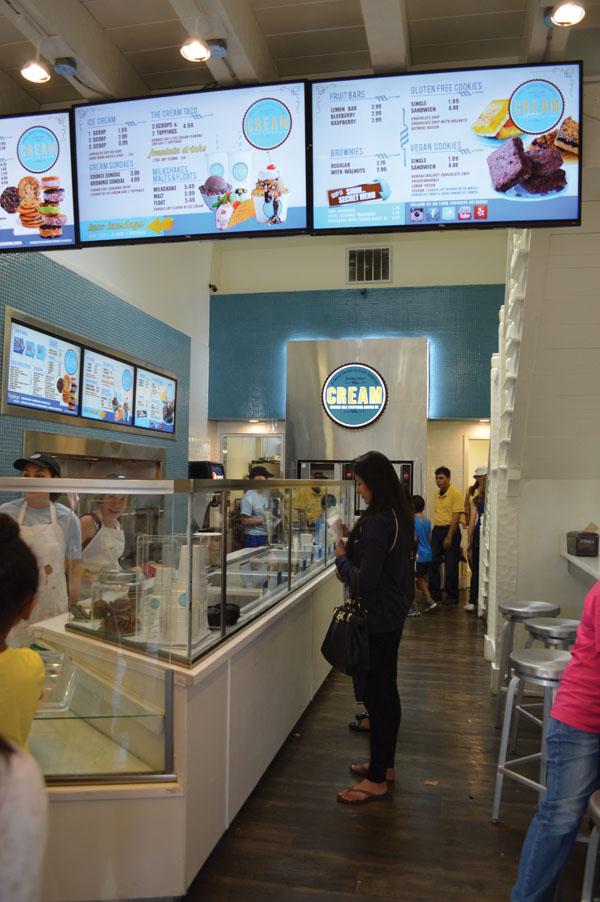 It’s nearly 10 p.m. on a Friday  night and I’m immersed in a mob of excited people surrounding Palo Alto’s next big thing: CREAM, a newly-opened walk-in restaurant dedicated to the creation of ice cream sandwiches to satisfy our sweet tooth. Expanding to Palo Alto this past summer, CREAM, which now has three locations and counting in California, was an instant hit. Who knew a tiny specialized Berkeley-originating restaurant could attract a two-hour-long line every night since its opening?  I certainly didn’t.

But when you think about it, this isn’t a new thing. CREAM has joined the California trend of super-specialized dessert restaurants: first it was Sprinkles Cupcakes, several years ago. Later, Kara’s, followed by an innumerable line of frozen yogurt places. And now this, a growing franchise devoted to ice cream sandwiches. And according to manager Matthew Peterson, CREAM’s popularity never dwindles.

“Berkeley’s been busy for three years now, they’ve always had lines,” he says.

And the lines are simply enormous. There are some who wait for up to two hours for the chance to enjoy a CREAM ice cream sandwich. Senior Sydney Mignola, who works at CREAM, says there have even been complaints about congestion on the sidewalk outside from the immensity of the customer queues.

“We used to have people stand outside the line, and have people, almost like a bouncer, shuffle people in, so it wouldn’t crowd the sidewalk,” Mignola says.

“Sometimes it’s like 12:30 or near closing, and there’s still a ton of people, and you want to go home and they want to close down, so we have to work really fast so we’re not there until like three a.m.,” she says.

However, the long wait doesn’t seem to discourage customers from coming to CREAM.

“Part of standing in line is kind of the experience of going to CREAM,” Mignola says. “Anyone could easily make [an ice cream sandwich] at home, but I think it’s just like, you’re in line, you’re standing with a bunch of people, and you feel like a part of something.”

I have to agree. It’s worth a good wait, on the first visit, at least. After a considerable amount of time, I finally made it across the threshold and was greeted by a glowing ceiling-drop menu boasting an extensive collection of ice cream flavors and cookie varieties. Here are a few flavors you wouldn’t expect: matcha green tea, white pistachio, soy mint chip and Golden Gate caramel swirl.  Very Californian. You can even go so far as to order an M&M or cappuccino cookie. Being the less adventurous person that I am, I chose double chocolate chip cookies with coffee ice cream for the affordable price of $2.50.

On the whole, I was pleasantly surprised by CREAM. Before arriving, I couldn’t help but expect to have to pay a weighty sum for a mediocre ice cream sandwich, as I’ve become accustomed to at other dessert places over the years. But this was not the case.  The ice cream was creamy, the cookies were very satisfying and the sandwich was tasty and well-prepared for a good value: far better than what one is required to pay at comparable dessert restaurants. A memorable feature was that the cookies really were freshly baked. They were still warm when served, amplifying their rich flavor.

Mignola says that due to the small size of CREAM’s Palo Alto location, the cookies and ice cream are not prepared on site.

“The ice cream taco is a waffle cone shaped into a taco shell and you get three different types of ice cream,” Mignola says.

CREAM also provides dairy-free, gluten-free and vegan options for those who have allergies or eating preferences.

“We offer vegan and gluten-free options, so it’s not just like for one kind of person,” Mignola says. “It’s very accommodating.”

According to Mignola, the two vegan ice cream flavors are soy cherry chip and soy mint. The sandwiches are available for $2.50 each and $1.75 for a half sandwich.

Peterson says the restaurant began in Berkeley, some three years ago, by a family who brought their own ice cream and cookie recipes to the store.

CREAM now has four established locations in California, with a fifth on it’s way to San Jose.

“We thought Palo Alto would be the perfect location to having like a downtown scene with traffic, the night life,” Peterson says. “Stanford being really close, you know Berkeley’s right near the campus as well, and in the Silicon Valley too, so there’s a lot of catering.”

He says that although CREAM only has California locations currently, the company would like to expand across the country in the future.

“CREAM is expanding a lot right now,” Peterson says. “The plans are to go pretty big with it, so across the nation eventually.”

CREAM’s Palo Alto location is currently open until 2 a.m. on Thursdays, Fridays, and Saturdays, and until midnight the rest of the week.

The restaurant itself is small, bright and clean with well-trained staff and limited seating. There are an upstairs and a downstairs, each equipped with a few tables and stools, but on the whole, it’s more of a walk-in-walk-out establishment than a sit-down restaurant.  On weekend nights, CREAM is a great place to go for dessert, and if the lines ever begin to subside, I think it will be especially convenient any night of the week.

Peterson explains that the main purpose of CREAM is to provide the public with quality ice cream sandwiches at an affordable price.

He says that so far, these goals have been achieved, and CREAM has become extremely popular among its Berkeley and Palo Alto locations.

“People really seem to like it,” he says. “They will have one ice cream sandwich while some people will be like, ‘oh my god, can I just get another one cause it’s so cheap.’”

Mignola enjoys working at CREAM, as she finds the fast-paced vibe exhilarating.

“You get to meet a lot of cool people, you see a lot of people at CREAM,” she says. “You get to learn how to interact with customers in a kind of crazy environment. A lot of people think it’s like the coolest job in the world to work in CREAM … [and] you obviously get to eat ice cream and cookies all the time.”

CREAM is located at 440 University Avenue in downtown Palo Alto.