STAYING SHIELDED — Freshman Shamsheer Singh sits behind a plastic divider during her Zoom class in the ASB classroom. “In ASB, I feel that's one of my more interactive classes ... they're all like, really nice … So I got to know people pretty well,” Singh said. Photo: Ryan Seto

“I felt like I was on Zoom for hours, and I was missing in-person interaction and meeting new people, which I was really excited about,” freshman Shamsheer Singh said. The online school year held many challenges for freshmen with their loss of a traditional first year of high school experience. But, after months of learning from home, freshmen are now able to attend classes on campus for the first time.

To kick off Palo Alto High School’s reopening, the Associated Student Body held an in-person orientation for freshmen which included tours of the school, followed by entertainment provided by Paly cheer and snacks distributed by the Parent Teacher Student Association.

“We got to go into some of the buildings and we also got to play Spikeball and do a ton of Paly specific things, which was really fun,” Singh said.

According to a recent online opt-in Verde Magazine survey of 138 Paly students that was conducted from March 18 to March 22, 65.2% of the 46 freshman participants believed that Paly did a satisfactory job with the transition from middle to high school. Despite this, 81.4% believed that they missed out on important milestones and experiences they would have had pre-pandemic.

Four freshmen and an 8th grader share their unique views on the high school transition in the pandemic and their hopes for the upcoming months. 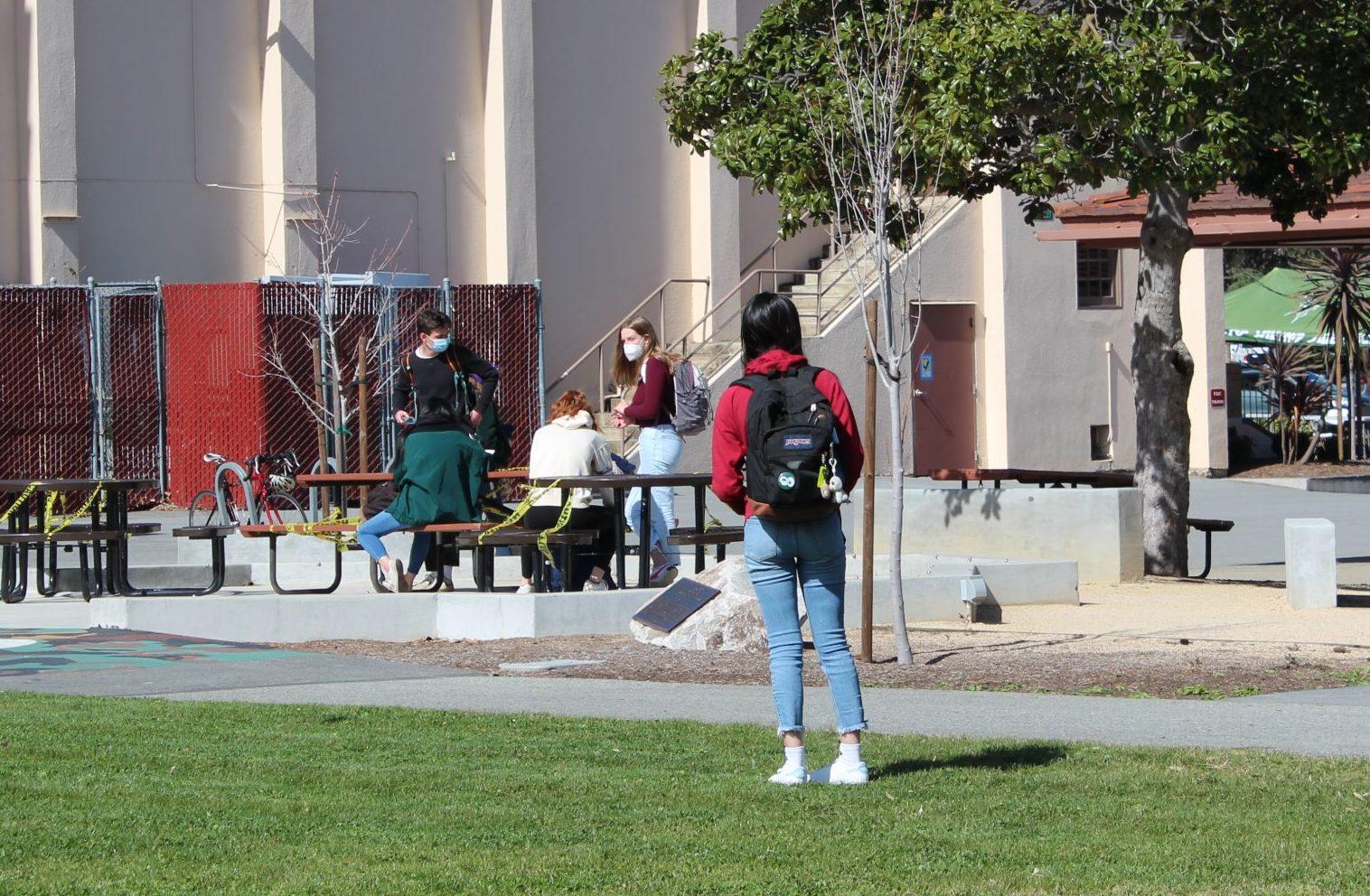 IN-PERSON INTERACTIONS — Students gather on the once desolate senior deck in the first weeks of hybrid learning in March. “It’s nice getting to [see] people and having some human contact face to face,” freshman Lydia Mitz said. “But it’s a little bit weird, to be honest.” Photo: Paisley Annes

This year, freshmen faced many adversities like entering a new environment without stepping foot on campus.

Singh was disheartened that high school would be similar to eighth grade without the excitement of a campus change.

“I felt like for the longest time that I was still in middle school because everything that was supposed to be different wasn’t different,” Singh said. “It was all the same.”

Singh attended the in-person orientation and felt that she finally got the closure she needed from middle school.

“If I waited until sophomore year, I would have felt like I was still a freshman and I was still unfamiliar with [in-person school],” Singh said.

Another benefit of returning to campus was being able to connect with peers as freshman Olivia Lindstrom experienced when she opted to participate in the recent hybrid school option.

“I knew people already,” Lindstrom said. “But I didn’t really connect with anyone, like teachers or students who I didn’t know previously, on Zoom.”

As a student new to the district, freshman Bee Montes faced difficulty finding a community of like-minded peers over Zoom.

“I just didn’t really have anyone to talk to in the beginning,” Montes said. “And usually when you go to a new school, you’re in-person, and you make friends pretty quickly … it was hard for me to make friends.”

To make up for the loss of interactions online, Montes joined the cheer team.

“I actually get to see people in person have a conversation that goes back and forth and there’s no poor connection or glitches,” Montes said.

“I’m excited to talk to everyone that I haven’t really seen in a long time from my school,” Mitz said. “I’m also excited to meet new people.”

However, Mitz has become accustomed to the virtual school lifestyle after a year of distance learning, and worries about being in a new environment.

“I think most people are nervous because they’ve never really been on campus,” Mitz said. “And they haven’t seen anyone from school in a long time.”

After going through course selection and learning what Paly has to offer, she’s excited for the high school years ahead.

“I think I’ve been provided a similar experience to pre-pandemic times by Paly, but if I was in-person the whole year, then it would have been much easier to talk with friends and figure out what courses to take together,” Mitz said.

Overall, throughout the year students like Singh learned to make the most of the Zoom environment.

“They [her teachers] did a lot of breakout room activities, which was also nice because … I got to talk to people who I knew from my middle school but I hadn’t really interacted with a lot,” Singh said.

Sophia Kim has also found ways to overcome the social challenges of her online classes.