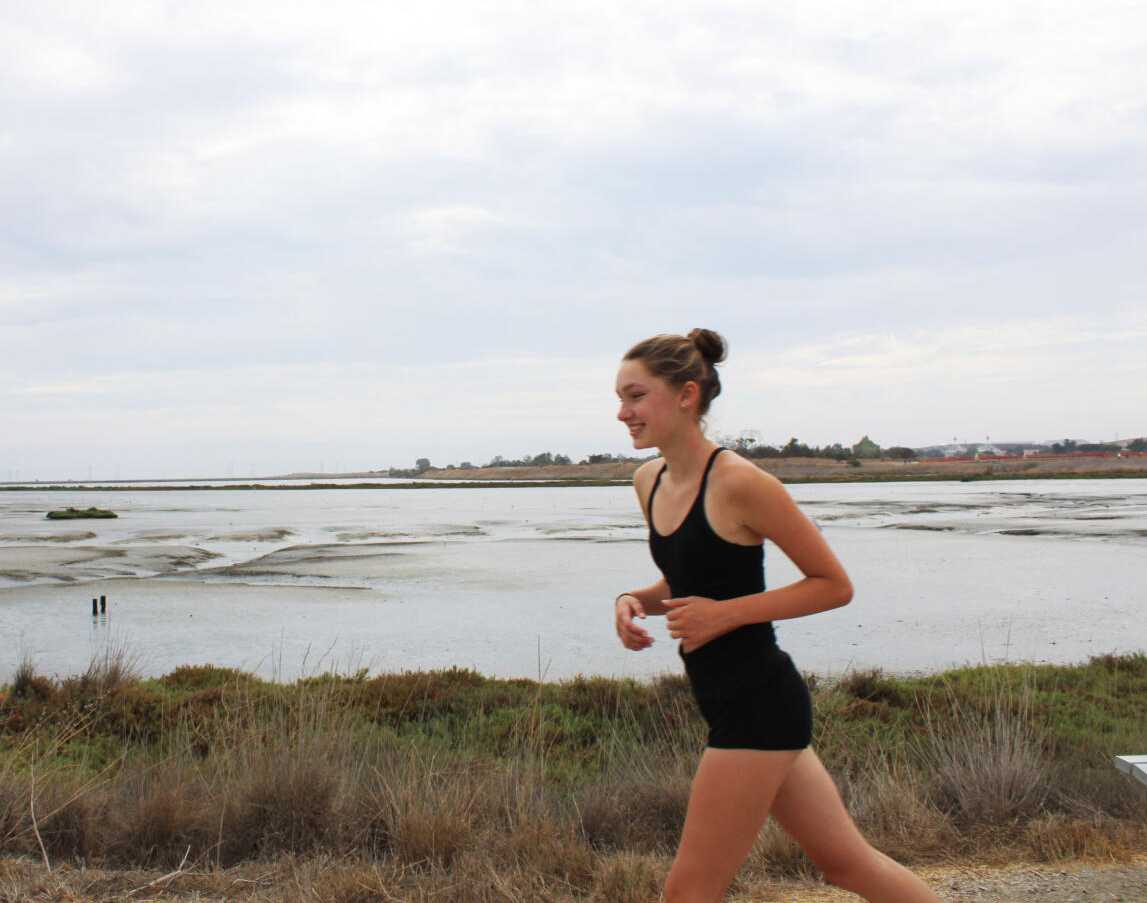 ON THE MOVE — Palo Alto High School freshman Kate Nelson runs at the Baylands. She adjusts her insulin pump settings to account for a drop in her glucose. "Once I started doing more intense physical activity, I had to come to terms with the fact that it is different for me," she said. Photo: Ajin Jeong

Sneakers crunching on the Baylands’ gravel path, Palo Alto High School freshman Kate Nelson moves with the even stride of an experienced runner. Nelson, who runs cross country and track, finishes her jog without a change in her breathing.

But with longer runs, Nelson says, she is often left breathless despite attempting to pace herself. Although some despise that feeling during exercise, Nelson enjoys running because of the feeling of accomplishment after she finishes her race, especially when motivated by her friends.

Nelson is one of the few Paly students with Type 1 Diabetes, which she was diagnosed with at two years old. A combination of advanced technology, passion and support from the people around her has allowed Nelson to thrive as a runner, and a Paly freshman, managing her condition to blaze her own trail.

Nelson’s enthusiasm for running is palpable even without her friends by her side. She smiles as she jogs back down the path, putting two white patches (one on each of her triceps) into view.

These devices are the only outward sign of a condition that decades ago would have made the athletic success Nelson has achieved impossible.

“Growing up, … I was like, ‘I’m gonna do everything everyone else does.’”

Because strenuous activity uses up glucose in the body more quickly, Nelson must plan ahead before running, and occasionally sit out on activities when her blood sugar is low.

“Growing up…I was like, ‘I’m gonna do everything everyone else does,’” Nelson said.

But that changed after Nelson stopped playing tag on the Ohlone Elementary School playground and started to participate in organized sports, especially swimming, alongside her friends.

“Once I started doing more intense physical activity, I had to come to terms with the fact that it is different for me,” she said.

“This sport is something that I really enjoy doing. And even though it’s a hassle, it’s worth it.”

When Nelson’s blood sugar is low enough, it could lead to dizziness, sluggishness and, depending on the severity, passing out.

Despite the challenges that diabetes poses for running, Nelson continues to improve her records with each race with the freshman cross country team.

“I’m not one of the standouts,” she said. “But I’m definitely better than when I started.”

With cross country practice and meets five to seven days a week, Nelson works on pacing herself and improving her time.

“This sport is something that I really enjoy doing,” she said. “And even though it’s a hassle, it’s worth it.”

Managing her blood sugar during athletics is not the only challenge Nelson faces; as a freshman, Nelson has had to transition into high school, taking elevated courses like French 2 and World History — her favorite subject — all while trying to balance schoolwork, athletics and free time.

Especially because of the independence that comes when entering high school, Nelson’s parents constantly worry about the day-to-day management as well as the long-term effects of diabetes.

“When Kate [Nelson] was much younger, I was worried about each decision I made for her day-to-day care of diabetes,” her mother Dana Nelson said. “Now, as Kate manages her condition independently, I worry about the decisions she is making for herself.”

In addition to transitioning into high school, Nelson’s life became more complicated when she and others with diabetes were recently thrust into the political spotlight.

“I’d rather be a little uncomfortable and have them know the correct information than have them go around thinking something is true that is not.”

When insulin was first discovered in 1923, the inventors sold the patent to the University of Toronto for $1 USD in hopes of saving more lives. But by 2016, the average cost of insulin per month reached $450, according to The New York Times, leading many patients with diabetes to skip doses or go without treatment. A Democratic House committee accused pharmaceutical companies of raising their insulin prices at the same time to maintain a monopoly. 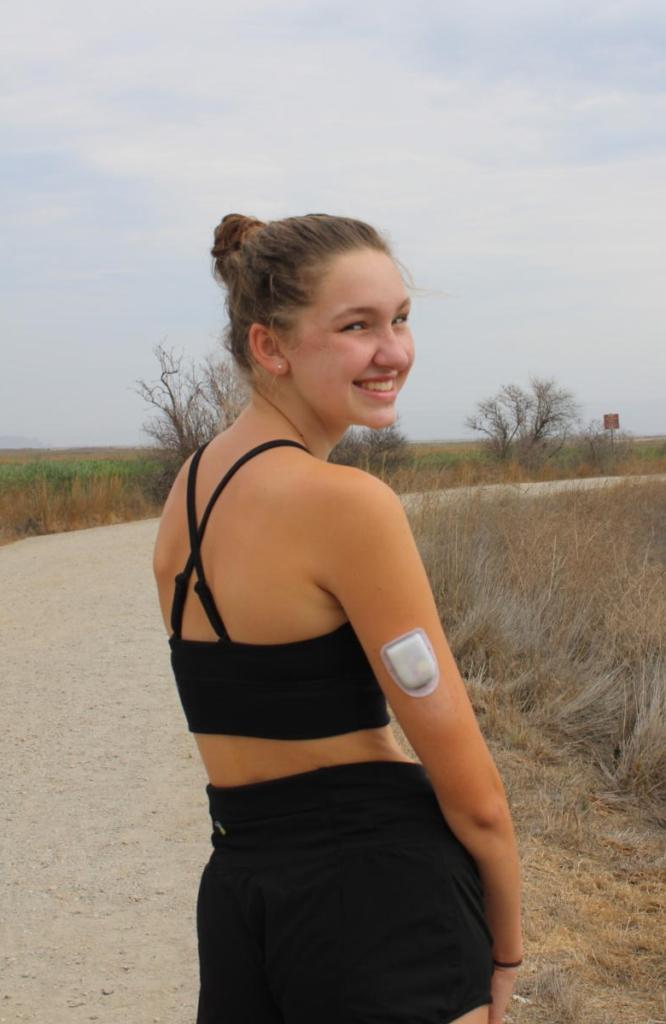 QUICK LOOK BACK — Palo Alto High School freshman Kate Nelson smiles turning backward, displaying her Continuous Glucose Monitor. Though the CGM was not accurate and difficult to use when Nelson first had to use the medical device, technology has long improved since then. “Although it’s definitely come a long way from where it was, I’d say what I would find most convenient for the future is something that better helps balance activity,” she said. Photo: Ajin Jeong

On Aug. 7, the Senate voted on a bill that would cap the price of all insulin prescriptions to $35 a month. But 43 Republican senators voted to block the bill, capping the price only for those with Medicare. The co-pay will be the same for people with private insurance. In an anonymous opt-in survey by Verde Magazine of 226 Palo Alto High School students, 75.7% of respondents disagreed with the senators’ decision.

For those still burdened with high drug costs, a nonprofit created by a group of large U.S. hospitals announced in March that they would release a cheaper form of insulin in 2024, according to the Washington Post.

Though Nelson views lower-cost insulin as a good thing, she wonders if it is ethical to sell the lifesaving hormone at all.

“I rely on insulin to function like a normal human being,” she said. “So it’s just disappointing and frustrating that there’s a price on that.”

Because Nelson has private insurance, her parents only have to pay a copay of $50. But if she were not covered by insurance, insulin would cost about $1,000 per month.

“I’m just hoping it all works itself out,” Nelson said. “And that stuff’s [insulin] affordable.”

As a trailblazer of sorts, Nelson witnessed the development of new medical equipment, which continues to improve; when Nelson was first diagnosed, CGMs were not accurate and were difficult to use. To accurately measure her glucose levels as a fourth grader, Nelson had to prick her finger to draw blood. Since then, CGM accuracy has increased and the “closed-loop system” has been implemented.

“I’ve gotten to see up front how much it [diabetes treatment] has improved, especially because I’ve had it [diabetes] for over 10 years,” Nelson said. “Although it’s definitely come a long way from where it was, I’d say what I would find most convenient for the future is something that better helps balance activity.”

“Now, as Kate manages her condition independently, I worry about the decisions she is making for herself.”

Her mother also hopes that technology continues to develop for medical equipment.

“I hope innovation and development of tools to manage Type 1 Diabetes continues to expand to improve the lives of people with Type 1 Diabetes,” Nelson’s mother said.

In fact, Nelson helps in the process to develop new medical equipment by participating in numerous studies at Stanford, which has allowed her to connect with other people with diabetes.

“It’s always really interesting to meet people and hear how they handle it, especially when they’re from different walks of life,” Nelson said.

Though she believes much about Type 1 Diabetes has been destigmatized, Nelson sometimes faces confusion and misunderstandings when she talks about her medical condition.

“A lot of times people assume it’s Type 2 and that’s from lack of activity or making poor health choices,” Nelson said. “I’m like, ‘I make good choices. I’m healthy. It’s just that my pancreas decided to not work.’”

Nelson recognizes that she will likely have more awkward conversations in the future, but she has grown more comfortable in informing against people’s mistaken beliefs.

“I’d rather be a little uncomfortable and have them know the correct information than have them go around thinking something is true that is not,” Nelson said.

After all, Nelson is just a teenager in high school and is still navigating through the beginning of her life. She knows she wants to continue to run, but she is leaving the rest of her future wide open.

“We’re trying to keep it achievable,” Nelson said. “And then figure it out from there.”

When Nelson opens her eyes in the morning, she instinctively checks her blood sugar on her CGM. The device implants a needle into her skin and reads her blood sugar, sending the readings to her insulin pump.

Although her CGM and insulin pump interact with each other to keep her in a safe glucose range overnight, she can wake up with a higher or lower blood glucose level sometimes and must manage it manually.

Once Nelson eats breakfast, she packs her bag — making sure to bring her cross country clothes and shoes for after-school practice — and leaves her house at 8:20 a.m. to bike to school.

Between breakfast and lunch, Nelson checks her blood glucose levels to make sure it is in a good range for lunch. If it is too high, she doses insulin on her insulin pump to lower it. If it is too low, she picks up brunch from the Student Center and eats it while talking to her friends to get it back up.

For lunch, Nelson either waits in the school lunch line or picks up a Caesar salad from Trader Joe’s at Town and Country. If she picks up hot lunch, Nelson researches the nutritious makeup of her meal and enters the amount of carbohydrates into her insulin pump. However, if she buys a salad, as she usually does, she is better able to track her carb intake, which is converted to glucose in her body.

“I’ll try to get a salad because with cross country I have to get my blood sugar a little bit high but I can’t go and have it be super high…in order to have it be safe,” Nelson said. “So I have to eat something that I don’t have to dose [insulin] for.”

Before practice, Nelson makes sure to change the settings on her insulin pump to exercise mode to accommodate the expected change in her glucose levels.

After practice, Nelson walks her dog Umpire, who was her service dog in middle school. Then, she completes her homework.

Though Nelson’s schedule is currently full with classes, cross country and homework as she adjusts to high school life, she is still trying to find more interests while continuing to read as much as she did over the summer.

“I love reading,” Nelson said. “So I just have had trouble finding like a book where I’m like, ‘Yeah, this is it.’”

“I do prefer to do it later at night,” Nelson said. “Because if I do it in the day, then whenever the next time to change it is, it usually lines up on a school day, and I don’t like having to change my medical devices at school.”

Once she falls asleep, her CGM and insulin pump continue to manage her blood glucose levels until the morning.