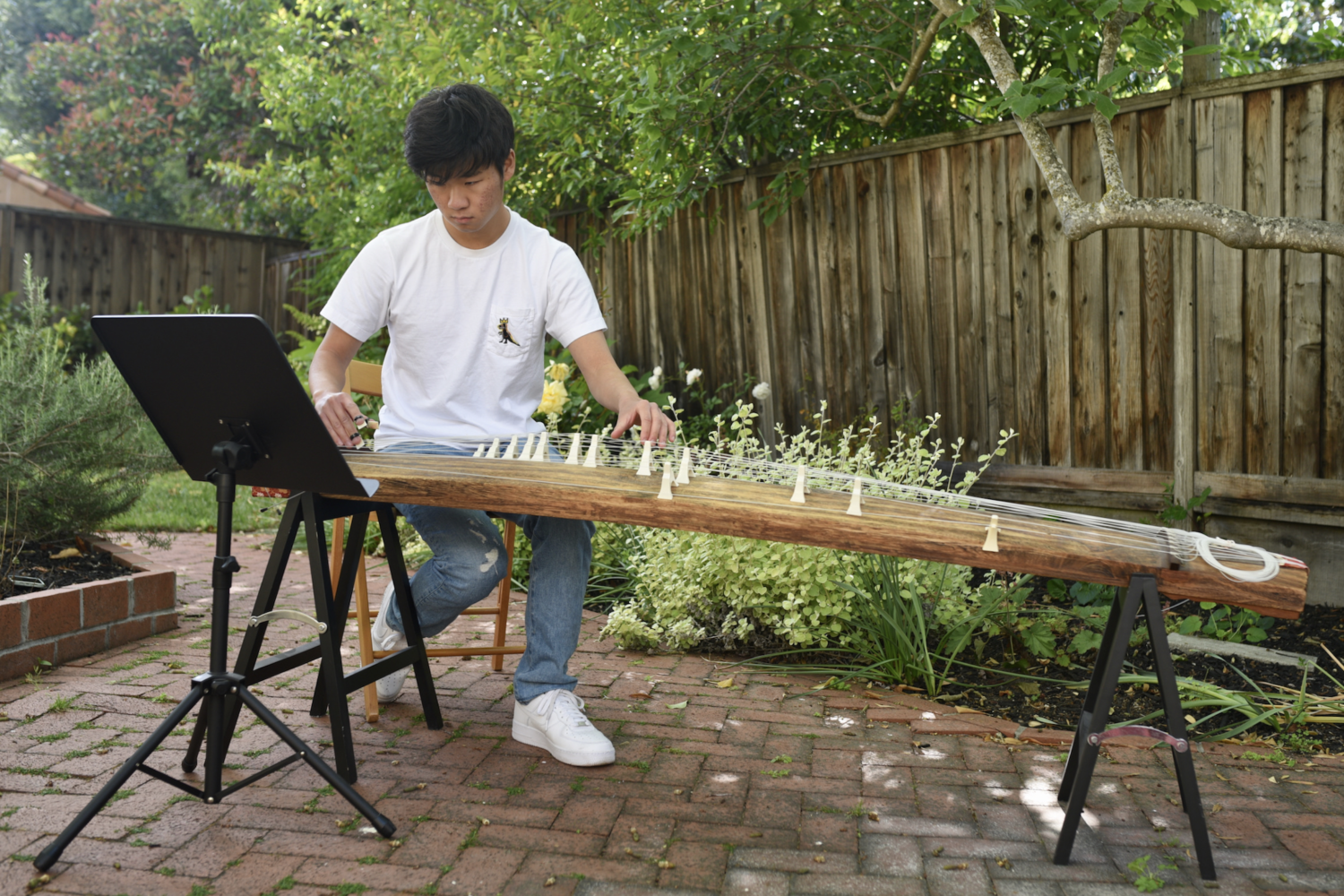 CAPTIVATING KOTO — Ogata plucks the strings of his koto as he performs a short set for Verde in his backyard. Though a renowned player already, Ogata said he is not motivated by fame or fortune when practicing his music. “I don’t really have the goal of being the best player in the world, or anything,” Ogata said. “I just want to make sure that I keep getting better, and that I’ll still be able to play just as well when I’m older. I want to be that cool Japanese grandpa that can do a bunch of cool grandpa things.” Photo: Emily Yao

The full, ringing sound of a plucked string fills the quiet afternoon air as Palo Alto High School senior Ken Ogata begins to play the opening notes of a theme from Japanese movie Princess Mononoke on his koto. After a pause, he begins swiftly moving his fingers across the instrument’s 13 strings — transporting listeners to ancient Japan with a series of cascading notes.

The koto is a six-foot-long zither consisting of a hollow wooden body, strung with long strings that are hand-plucked by the player. Ogata, a skilled koto player, has been playing Japan’s national instrument since fourth grade. Though Ogata said he was not very keen on playing the koto at first, a transformative learning experience with renowned koto master Curtis Patterson taught him to love the instrument.

“I saw it as an instrument that’s played by old Japanese ladies, and I thought I … didn’t really fit the bill,” Ogata said. “It’s only after I started practicing with my koto teacher in Japan when I started to really get it. … I find it funny that the person that taught me [to love] the koto wasn’t some old Japanese person, but an American dude with a midwestern accent. He’s the reason why I continue to play after all this time.”

Ogata said that as he began learning to enjoy playing the koto, he came to appreciate its unique melodies as well.

“The koto’s got this distinct sound that I absolutely love,” Ogata said. “Even after nine years of playing, I still can’t get enough of it. It’s this flowy, graceful sound — imagine a river or waves on a beach but in music format. It’s a sound that’s authentically Japanese.”

“The koto’s got this distinct sound that I absolutely love. … It’s this flowy, graceful sound — imagine a river or waves on a beach but in music format. It’s a sound that’s authentically Japanese.”

Ogata said he typically plays traditional Japanese songs that are over 200 years old, an experience which, along with other requisites for his koto practice and performance, has allowed him to connect deeply with his roots.

“The koto forces me to wear traditional kimono robes, sing Japanese songs from the 19th century, and study Japanese history,” Ogata said. “I have grandparents that have played the koto and other traditional Japanese instruments, so it’s my way of connecting with my grandparents too. Most of them aren’t alive anymore, so … it’s a way of honoring them.”

According to Ogata, the cultural significance and power the koto carries allows it to tell authentic stories through its notes and melodies.

“Music can vividly express different intricacies about a culture that can’t be described with words,” Ogata said. “An essay might not be able to express Japanese culture, but the koto can definitely capture the mood and feel of Japan.”

“Music can vividly express different intricacies about a culture that can’t be described with words. An essay might not be able to express Japanese culture, but the koto can definitely capture the mood and feel of Japan.”

In an effort to spread his love for both his instrument and the culture it represents, Ogata is currently working on obtaining his koto teaching license.

“After earning my teaching license in a few months, I hope to share my music through teaching people that are interested in Japanese culture,” Ogata said. “I also want to transform koto music to a more contemporary feel, so that it can adapt to modern times a little better. … I hope to be able to get someone to fall in love with the koto, just as I did in Japan.”