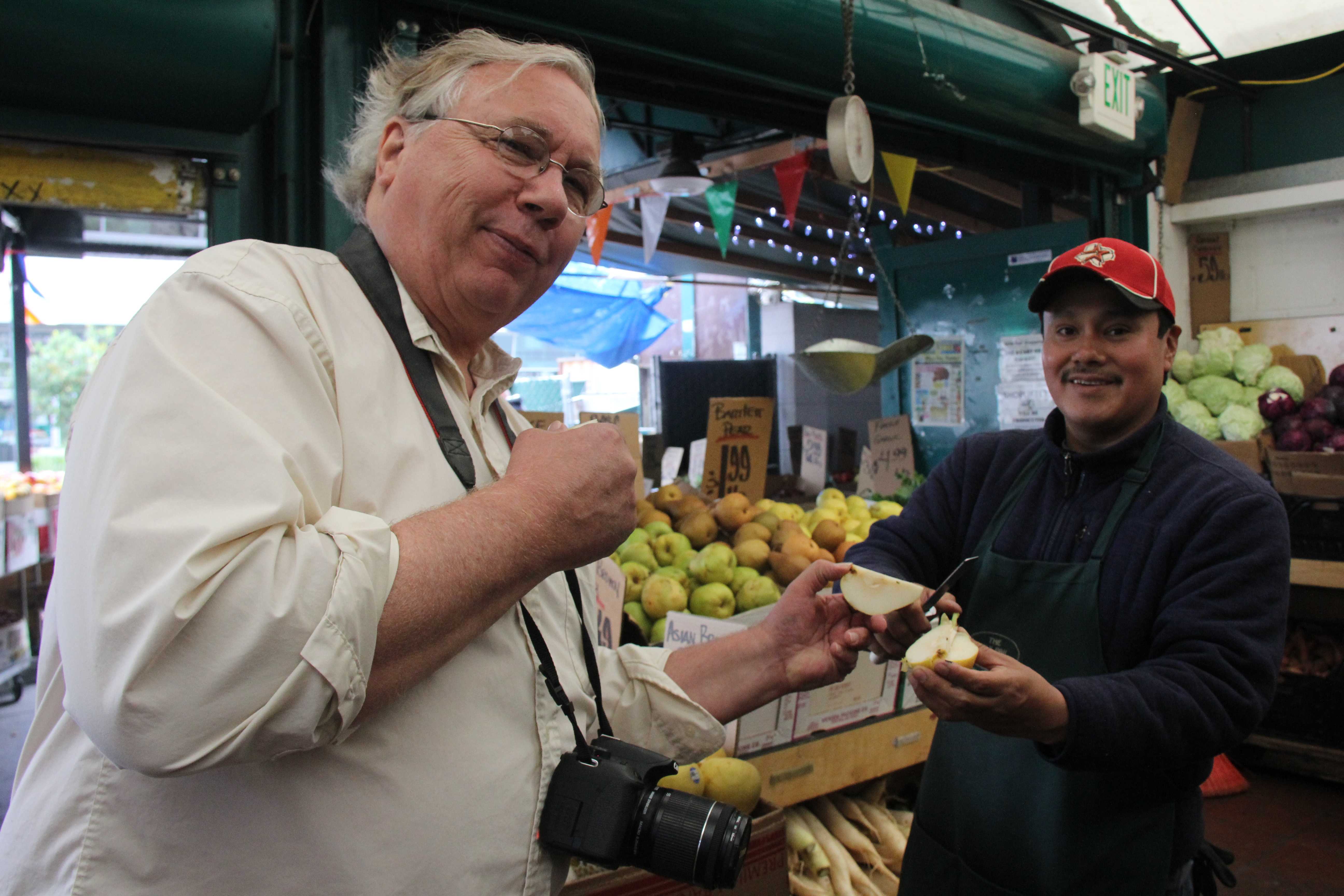 WHAT’S TO EAT? Milk Pail owner Steve Rasmussen grabs a slice of pear to eat while discussing items sold in the store. The most popular item the store sells  —  a package of frozen  croissants. “Croissants are ... the most popular,” Rasmussen says.  “The one [product] that contributes most to the store revenue is produce generically.” Photos by Asia Gardias

At The Milk Pail Market, a customer is transported to an authentic European market — a warmly lit open space, with sun-damaged party pennants flying overhead and competitively priced produce housed in plastic crates. As the San Antonio shopping centerstore prepares to close its doors for good, community members are mourning the pending loss of a piece of local culture. 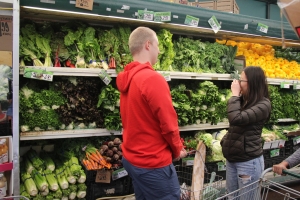 PRODUCING BARGAINS Customers pick out produce to purchase. Apples are the most popular fruit sold at the Milk Pail.

When we went to the market, we caught up with owner Steve Rasmussen and customer Kate Disney. Disney has shopped at the store since moving to Mountain View in 1985, so her reverence for the store is evident in their conversation.

“We come here like three or four times a week,” Disney — a self-described “brand-loyal” customer — says. “We’re constantly buying more and more. … When we heard it was closing, it felt like a tragedy — like what are we going to eat?”

When Rasmussen announced the store was being sold to next door developers — meaning closure — in a March Facebook post, many long-time customers paralleled Disney’s disappointment in the comments and online community forums: over 500 Facebook users shared the original post and over 300 commented.

The grocery store spawned from humble beginnings. Rasmussen says the business began in the late 1950s selling drive-thru milk sourced from small-scale farmers — at two-cents-a-gallon cheaper than other businesses to help them compete against big dairy plants in Silicon Valley. He had worked at Brentwood Farms, Milk Pail’s predecessor, bottling milk since the age of 11, so when he heard the location went bankrupt, Rasmussen bought it from court, expanded its product offering and created The Milk Pail.

“Out of the blue, I heard that it [Brentwood Farms] put chains on the doors: they went bankrupt, they couldn’t pay their bills. I said to my dad, ‘That’s crazy — they did so much business,’” Rasmussen says. “So within about 10 days, I had reopened it. … That’s how it all started.”

After many years of operation, but notwithstanding changing currents, the community staple — known for its flaky croissants, extravagant cheese selection and arguably the freshest produce in the Bay Area — will close on June 30. 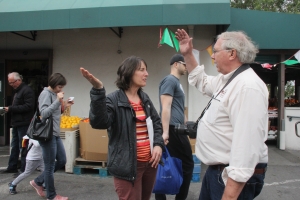 GOODBYES Customer Kate Disney speaks with the Milk Pail owner about reasons for closing. Disney says she and her husband both adore shopping at the market. “When I first introduced my husband to this place, he was like ‘oh my gosh this place is amazing.’”

The story about the closing of the beloved Milk Pail market is full of juxtapositions — between the grocery preferences of the Baby Boomers and Millennials; between the once-been industry suburbs and an upcoming metropolis; between immigrants’ retaining cultures and the lack of a home-grown one; between the aspirations of a father and his children — between the past and the future.

Rasmussen sits on a lustrous bench — one of four, none of which are occupied — across the street from his shop. Overhead, scarlet lettering reads “Icon Theater” while Billboard Top 100 hits blare from covert speakers.

Sitting underneath newly built towering apartment developments, Rasmussen explains the difficulties his business faced during the development of surrounding plots.

“We survived this construction for … three and a half years,” Rasmussen says. “It’s because of … the legacy customers — the octogenarians — who shop here: when the earth movers got in their way, they wouldn’t move out of the way. Our customers are very determined.”

Kai, one of Rasmussen’s daughters who was also the store manager for two-and-a-half years, expressed a similar sentiment about construction struggles.

“Before all this [the developments] had been built, this was just a big parking lot that we took full advantage of,” she says. “It was really advantageous because pretty much an unlimited amount of people can come shop. That’s why it was insanely crowded all the time before.”

Besides space around the store becoming more limited, the family had to fight to renew their parking lot license and deal with the reconstruction of the sidewalk that connected to their front entrance, which Steve says led to a dip in sales.

“We knew that we would have issues with the amount of congestion, … we knew that in another 15 or 20 years, the parking license that we have for the corner was going expire, … and we also knew that the parking on the corner is insufficient to generate the revenues we once enjoyed,” Steve says.

While the silver lining for enduring the construction was supposed to be an increase in customers from the apartments, he says the reality was different.

While Steve sits on the bench for an hour, only two cars pass the road connecting the apartments and the Milk Pail — one of which is from the restaurant delivery service, waiter.com.

“So waiter.com is bringing lunches for those Facebook employees,” Rasmussen says, pointing up to the Facebook office complex next to the store. “We met with waiter.com, but we decided that … we weren’t staffed well enough. … We could have done something, but we didn’t have enough prepared food skill, energy or personnel.”

While previous customers traveled to the Milk Pail themselves, it was apparent that incoming younger populations were choosing alternatives to purchasing their groceries in person. Steve says two customers from the apartments invited him to visit after having purchased two cheese platters from his store, so he took the opportunity to survey the newcomers about their shopping preferences.

“They bought two big cheese plates two weeks ago from us and we were invited in to the third or fourth floor,” he says. “I had a chance to talk a little bit about the Milk Pail. I asked the 40 people who were in this office apartment, ‘How many of you have shopped at the Milk Pail more than three or four times?’ It was 40 people — three people raise their hands. So we don’t get that [younger] population coming in.” 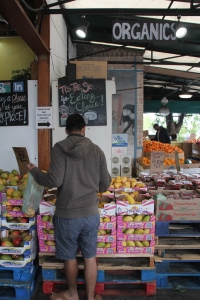 PRODUCING BARGAINS Customers pick out produce to purchase. Apples are the most popular fruit sold at the Milk Pail.

The Milk Pail, stocked with specialty products, doesn’t seem to appeal as much to Silicon Valley’s newer populations; the cultural composite desiring European, Middle Eastern and Asian delicacies has declined, slowing the number of customers coming through the doors, Rasmussen says.

“Over the years, we would have farmers who would come in… with Asian specialties or Indian specialties,” Steve says. “We would add them to our produce line.  … so it became kind of a partnership.”

In addition to fewer customers with exotic palates, more convenient meal options have formed in the area, lowering the need for Milk Pail’s products. For immigrant families who purchase specularity products as a connection to their heritage, the closing of the Milk Pail further detatches them from their  culture.

For Vil and Anastasia Nagimov — first-generation Russian immigrants who regularly shop at Milk Pail — the closing marks the end of an opportunity to delight in Russian cuisine.

“We really like the store because we can buy foods from our home country,” Anastaisa says. “We don’t want the store to close.”

“We had a 73-year-old woman named Helen who had a voice box because she had been treated for cancer,” Steve says, recalling a former employee. “She was too old and nobody wanted [to hire] her. I said, ‘I want you — let’s give you a try.’ … So she started working for us. … One day somebody came in and was very depressed, so Helen took her aside … and had a long chat with her. Later in the day, before Helen went home, this woman who came back with a three page letter that she hand delivered to Helen.”

The Milk Pail provides more than a shopping experience. Moments like those of Helen with the customer built unparalleled community connections. The store’s closing comes as a great loss to those who have supported it for years. Earlier this year, after the death of former store manager James Liu and a buyout by surrounding developments, Steve met with staff to let them know of the store’s closing.

“At the end of our meeting up at our warehouse, [Milk Pail employee] Alba said she almost started crying,” Rasmussen says. “It’s because when we close, it’s way different than when a Safeway closes.”

While customers repeatedly expressed wishes for the store to continue in some capacity, Rasmussen says he doesn’t currently plan to continue running Milk Pail.

Neither of his daughters —  Kai and Erica — say they see themselves continuing the family business with higher education and life plans awaiting them. Still, Kai has thrown around the idea of a cheese food truck, and the family has considered options for relocation.

“I would say ‘never say never,’” Kai says. “But at this time, I don’t think it would be happening anytime soon.” 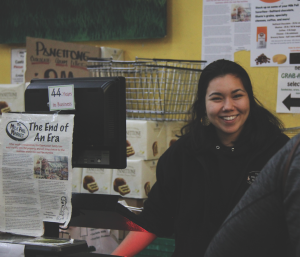 On a bright Saturday morning, Steve, Kai and Erica meet to have their photo taken in front of the cow mural which extends across the wall facing their parking lot. Steve jokes that they had never had their photo taken together in the store before, and he wanted to get one — “for the memories.”

“I guess the biggest emotion is feeling bittersweet.” Kai says, muffled by the noises of grocery carts and adjacent traffic. “Having been involved for the last seven years, but then also growing up in this business; it’s been such a fixture in my life that it’ll be hard to see it disappear.”