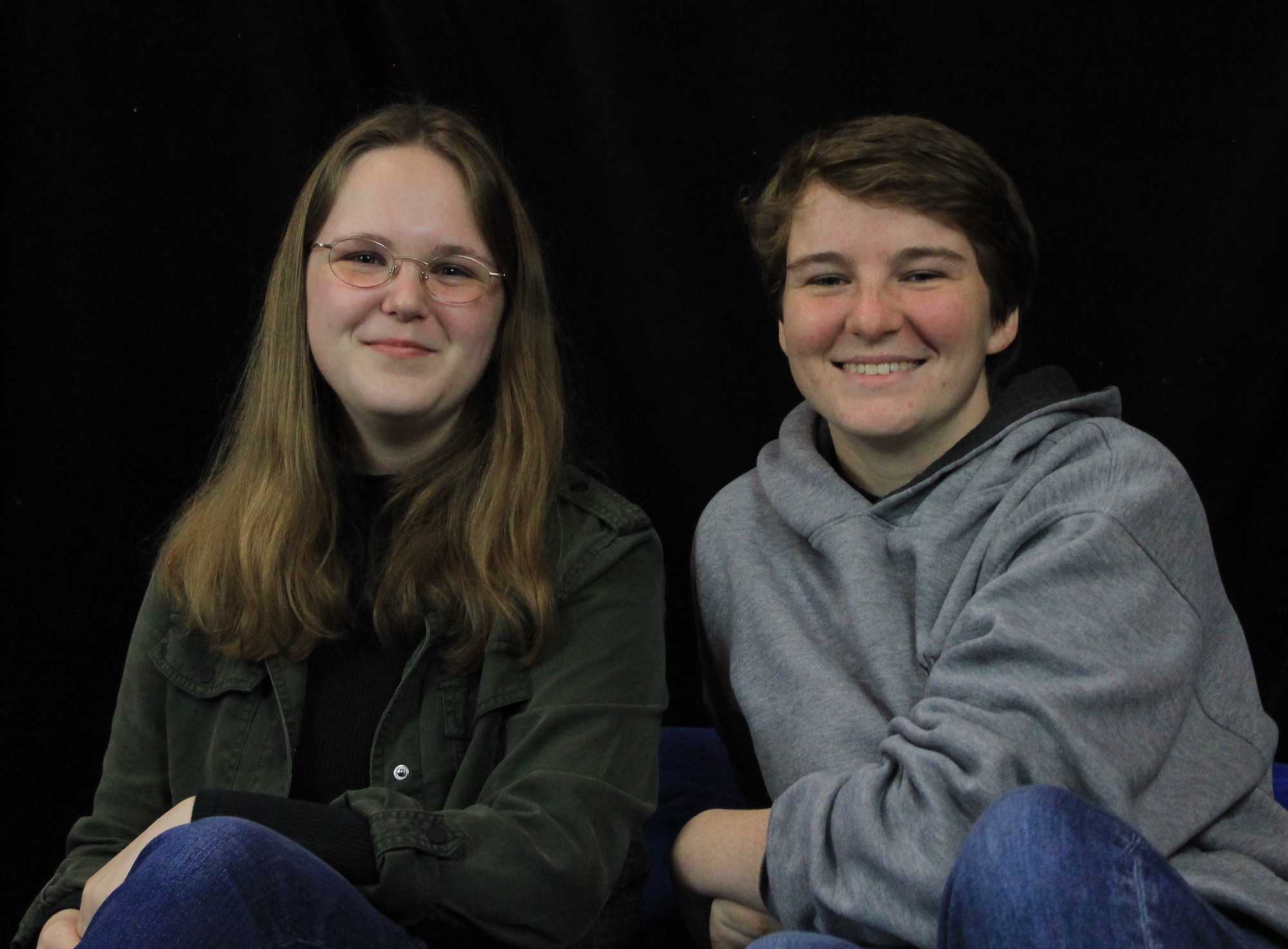 REFLECTING Palo Alto High School seniors Sky Croce (left) and Bees Baldwin (right) share the valuable lessons they learned while directing and producing “The Kentucky Cycle.” “We get to have a student in every single leadership position available, which is really unique and very cool,” Baldwin said. Photos by Zoë Wong-VanHaren

Lined on all sides by chairs filled with an eager audience, the classroom’s capacity is significantly smaller than the main stage of the Performing Arts Center, but the close-up nature of the performance creates an intimate setting that engages each viewer. Despite the spatial restriction, 54 audience members manage to squeeze in, selling out the play’s Jan. 17 debut.

The production came to life through both practice and performance. During the busy two months of rehearsals leading up to opening night, the team of students from all grades worked together to ensure the show’s success. Actors ran lines and blocked out scenes, stopping for helpful tips and redirections from their peers. Cast and crew members spent hours testing lights and sound systems, taping down wires and placing props. Only one thing was missing: an adult. 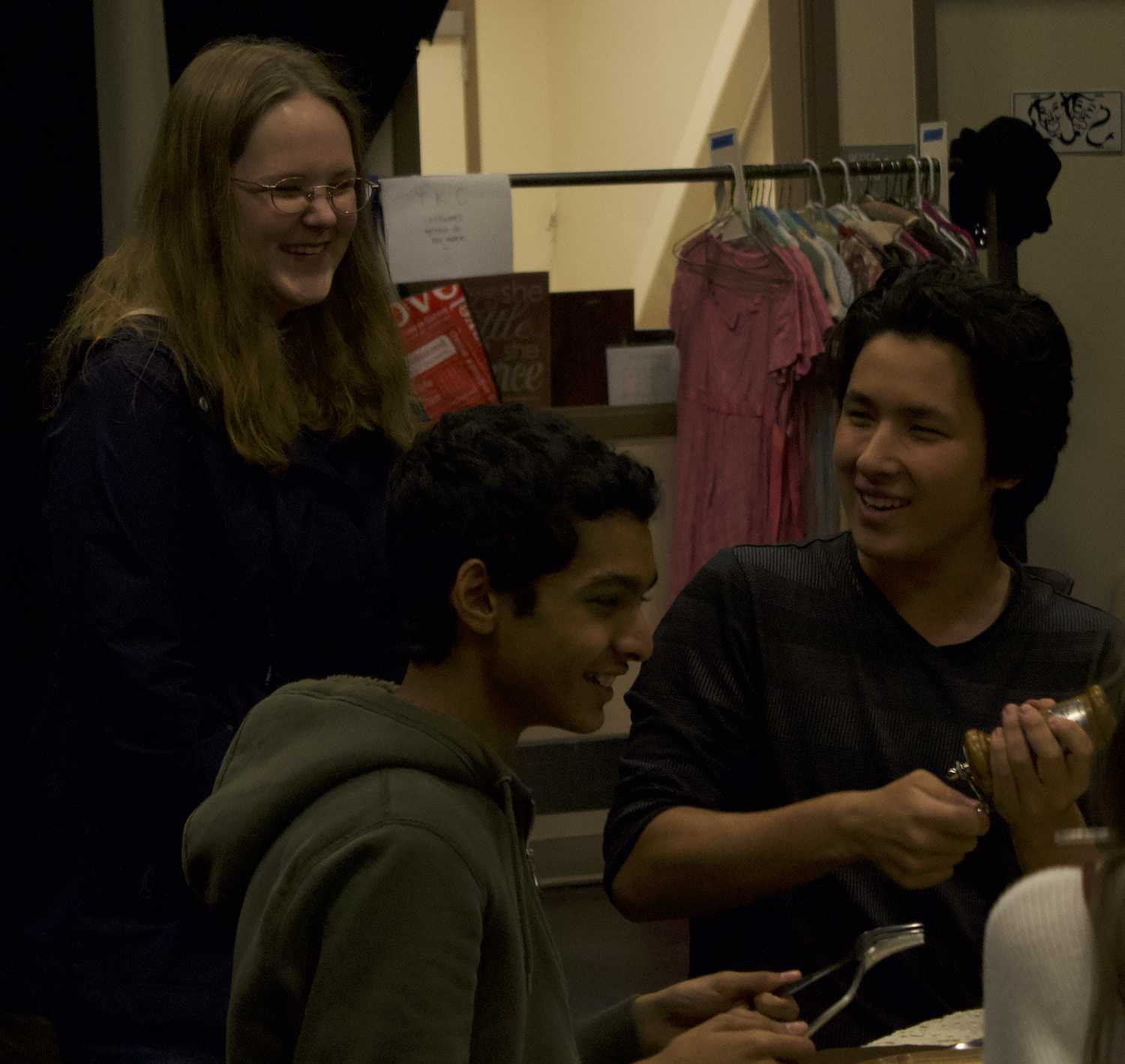 HARD AT WORK Croce laughs with the cast of “The Kentucky Cycle” at rehearsal two days before their debut performance. “I’ve been working really closely with the tech people — sound, lighting, costumes, props — and with the actors to get everything together,” Croce said.

Taking over this role of mentorship are two Paly seniors: director Sky Croce and student producer Bees Baldwin. Croce was first introduced to “The Kentucky Cycle” — a series of nine one-act plays by Robert Schenkkan — in her Theater 4 Honors class at Paly. After working intensively on one scene, she came up with the idea to direct and engineer the show without teacher involvement. Baldwin, her friend and fellow theater enthusiast, was equally excited by the prospect, and they brought the plan to theater teacher Kathleen Woods who gave them the green light. From there, Woods was almost entirely uninvolved.

Void of the guidance from typical PAC performance leaders like Woods, the rehearsal process had a palpably different feel to it than past Paly productions. Because the students were responsible for every aspect of the performance’s success, many participants felt there were more opportunities for growth and collaboration than there would have been if adults were involved. Additionally, students were able to undertake multiple jobs, which created unique learning experiences.

“Tech designers and actors were pretty blended together, as opposed to a regular show,” Croce said.

“The Kentucky Cycle” follows a Southern family’s encounter with storyteller J.T. Wells, who enthralls them with tales of city life. The family’s daughter, Mary Anne Rowan, has a turbulent love life and finds herself falling for the charming yet deceptive J.T.

Mary Anne Rowan is played by sophomore Anneke Salvadori, who noted that she had a positive experience being directed by a peer.

“I think it improved the show because Sky was able to build off of our ideas, I felt more acknowledged and like I was part of the creative process.”

“Us actors got to have more input in the discussion of what we were doing and she [Croce] better understood what we were capable of and helped us grow from there,” Salvadori said. “I think it improved the show because Sky was able to build off of our ideas, I felt more acknowledged and like I was part of the creative process.”

Although there were many positives to be found through this unique form of student leadership, one aspect of the process that some thought could be improved upon was time management.

“Having a student director meant that there was less structure, which I enjoyed,” Aida Mohamed, the senior who played J.T. Wells, said. “I really like developing my character and learning my lines at my own pace. I felt free to experiment. That being said, the schedule was less concrete, so at times I didn’t feel ready for rehearsal because there was no hard deadline for memorization.”

Croce says she learned how to complete many tasks she had not anticipated, such as sending tickets to the box office, creating rehearsal schedules and running auditions.

“I’ve learned a lot of really important leadership skills,” Croce said. “It’s been a real journey, figuring out how to direct a really big group of peers without much adult involvement.”

Baldwin, who has been involved in every show through the theater department since starting at Paly, has also found value in a hands-on approach to learning what a student-run production brings.

“I learned a lot more and I think it’s because I wasn’t learning by observing the adults doing their thing and telling me what they were doing,” Baldwin said. “Instead, I was just thrust into it; it was more trial by fire. It was very cool to be able to learn a different way.”

“Tech designers and actors were pretty blended together as opposed to a regular show.”

Woods was also impressed by the student leadership demonstrated during the process, and is in favor of more student-run shows in the future.

The success of “The Kentucky Cycle,” has Croce, Baldwin and Woods excited about the potential for more student-led plays in the future.

“There aren’t any concrete plans laid out,” Croce said. “But I’m really hoping that Paly theater students continue to put on student-led performances in the future.”

Thespian Club to host Play in A Day

Bringing back the charm: Small theaters continuing the tradition