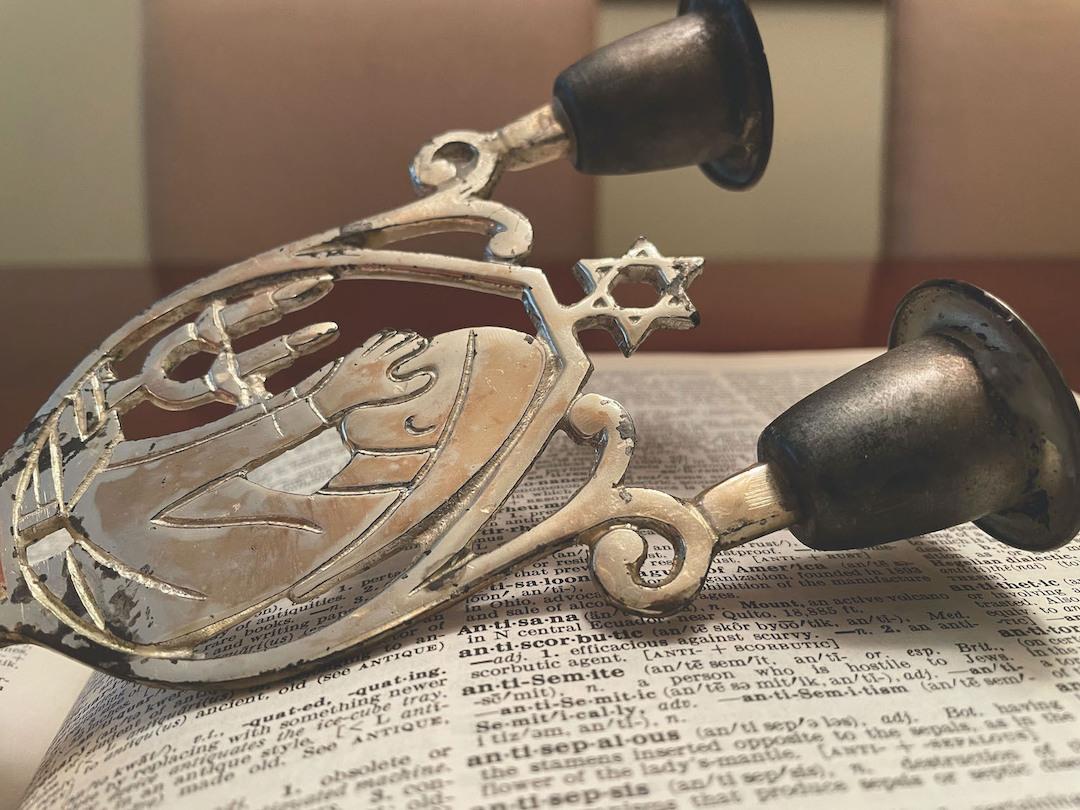 ANTISEMITISM ON THE RISE — A dictionary is open to the word "anti-Semite," which is defined as "a person who is hostile to Jews." Above the dictionary is a candle holder for the Jewish holiday of Shabatt, symbolizing the longetivty of Judiasm despite centuries of antisemtism. “It might have been in remission, but it was not eradicated,” Stanford American studies professor Ari Kelman said. Photo: Andy Robinson

“Was I shocked?” said longtime Palo Alto resident Charlotte Falla. “No. Just surprised to see them in this day and age in Palo Alto.”

It was late Feburary when the Goyim Defense League, a white nationalist group, distributed antisemitic flyers across Palo Alto neighborhoods, including that of Falla, a congregant of the Etz Chayim synagogue. After noting that the flyers falsely claimed that COVID-19 was a conspiracy instituted by the Jewish people, and that the Biden administration is controlled by a Jewish cabal, Falla said she notified fellow Palo Altans on Nextdoor as well as the antisemitism-fighting Anti-Defamation League.

But the flyers did not stop at Palo Alto — communities across the Bay Area had discovered similar flyers in the surrounding weeks. According to Laurie Balch, a lay-leader at Etz Chayim, the flyers are far from a “one-off phenomenon” for many in the Jewish community. Rather, they are indicative of a recent dramatic rise in antisemitism around the world and notably in the United States. According to hate crime statistics collected by the FBI in 2020, 54.9% of all U.S. hate crimes targeted Jewish Americans despite Jews only comprising roughly 2% of the U.S population.

“Into the later decades of the 20th century, American Jews believed that antisemitism had been licked, that people had learned the lessons they had to learn from the Holocaust … but it’s clear from the last five years, that that was not the case,” Stanford University American studies professor Ari Kelman said.

Given these findings, it is clear among many American Jews that this rise in antisemitism warrants significant reflection and a need for education to combat it.

“American Jews believed that antisemitism had been licked … but it’s clear from the last five years, that that was not the case.”

“We learned about the Holocaust, [how] it was so horrible,” Rosenblum said. “But now it’s like, ‘Jews are fine now, right?”

Other local Jewish community members agreed that in an era of rising antisemitism, school curriculums should make space for Jewish voices and stories.

To address these concerns, David Cohen, a Paly English teacher who is Jewish, said he believes that increasing awareness of anti-Jewish hate and teaching students a more complete history of the Holocaust could be acomplished by noting the commonalities between the Holocaust and other genocides.

“They … have in common a certain sequence of events that starts with isolating and shunning people and then setting their interests and their humanity outside the main group,” Cohen said. “And then once they’re dehumanized … it becomes possible to … systematically kill people.”

Cohen said that Paly students learn about the Holocaust through literature often taught in English classes, such as “Night” by Elie Wiesel, but noted that this book is not taught every year.

“My hope is that my decision [to not teach “Night” every year] doesn’t leave my students without any Holocaust education,” Cohen said. “My assumption, perhaps faulty, is that it’s covered in history classes as well, and so that what I decide to do in my sections of English 10A is not the single deciding factor.”

English teacher Lucy Filppu says she typically teaches “Night” every year and recounts its impact on her students, particularly when combined with other interactive teaching methods such as inviting a Holocaust survivor to speak to the class or showing an emotional film.

“We learned about the Holocaust, [how] it was so horrible. But now it’s like, ‘Jews are fine now, right?’ ”

Filppu said that the AP Seminar curriculum she teaches might provide students better resources when confronting misinformation surrounding the Holocaust and the Jewish people.

“What I do … is to hopefully teach you [students] the foundational critical thinking that breeds deep skepticism and respect for evidence, for facts, for nuance and for compassion,” Filppu said.”

However, with Ethnic Studies, a course that will focus on the history of racial and ethnic minorities present in California — including Jewish Americans — being mandated for high school students in California starting for the Class of 2030, many hope that the course will spur new discussions surrounding Jewish history. But according to Cronin, the effect of this new mandated curriculum on Jewish history teachings, the length of the course and the mandated grade are all undetermined.

Ultimately, Cohen said he believes that an in-depth Holocaust education is critical to reducing the misinformation that fuels antisemitism.

“If it [a rudimentary education on Jewish history] were enough … if just showing just images were enough, then I think we would have seen deep, more sharp decreases in hate and antisemitism,” Cohen said. “When we reach a point where [once taught properly] difficult history and unpleasant facts are seen as a threat, then it’s hard to assume the best intentions on the part of people doing it.”

Resources for Jewish education and advocacy