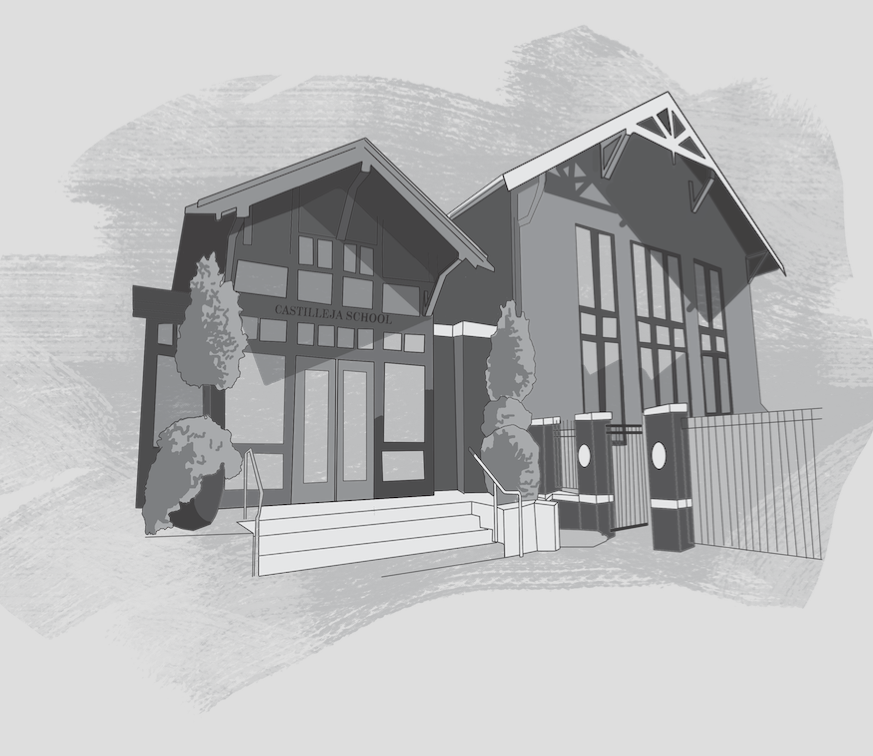 Spat over expansion: The neighborhood politics of Castilleja’s controversial expansion

All is fair in love and war. Or, love and construction.

These plans will allow Castilleja to gradually increase enrollment from the current 438 students to 540 students through several major construction projects. Castilleja’s efforts, however, have triggered an adverse reaction from residents living adjacent to the school.

Toward the end of the presentation, Castilleja Head of School Nanci Kauffman sarcastically remarks in response to neighborhood protests, “Children going to school! Can you imagine?”

Two weeks later and a few blocks away, a group of neighborhood residents who live adjacent to Castilleja gather and pour over the latest architectural plans around a solid marble table. The air smells heavily of pancakes, residents lean back against deep couches, and indignant voices reverberate throughout the house.

Called the Protect Neighborhood Quality of Life group, these residents want to protect their neighborhood from what they believe will be an invasive redevelopment that increases traffic — the opposite of what Castilleja claims the construction project will achieve.

Contradictions are rampant through what Castilleja and the PNQL claim transpired in their interactions with the other. From the number of construction plans provided to the residents to the impetus behind taking down a redwood tree on Castilleja campus, tensions run deep between the two sides. At the forefront of a growth -versus-residents debate that has hung over Palo Alto for the past few years, Castilleja and the residents are at odds.

Origins of the debate

When Castilleja approached the city council with an admission of over-enrollment at 450 students and a request for a new conditional use permit that would allow them to expand enrollment in 2012, it had several intentions in mind.

“Our feeling was, we should be optimizing this campus,” Kauffman says. “And to me, optimizing is educating as many girls as we can without negatively impacting the neighborhood.”

When Kauffman and fellow administrators revealed that they had over-enrolled and were hoping to expand to accommodate more students, the reaction from various neighborhood residents was strongly adverse. In particular, the residents were angered at what they saw as an intentional increase in the number of students enrolled and Castilleja’s subsequent efforts to accommodate that violation.

Gesturing to a Powerpoint presentation he had copiously put together, Nelson Ng, a member of PNQL, describes how the number of enrolled students gradually increased to 438, with Castilleja admitting an additional one to 15 girls every year since 2002. According to Ng, this increase in enrollment violates the CUP with which Castilleja is currently operating, which was established in 2000 with the stipulation that they would not grow beyond 415 students. 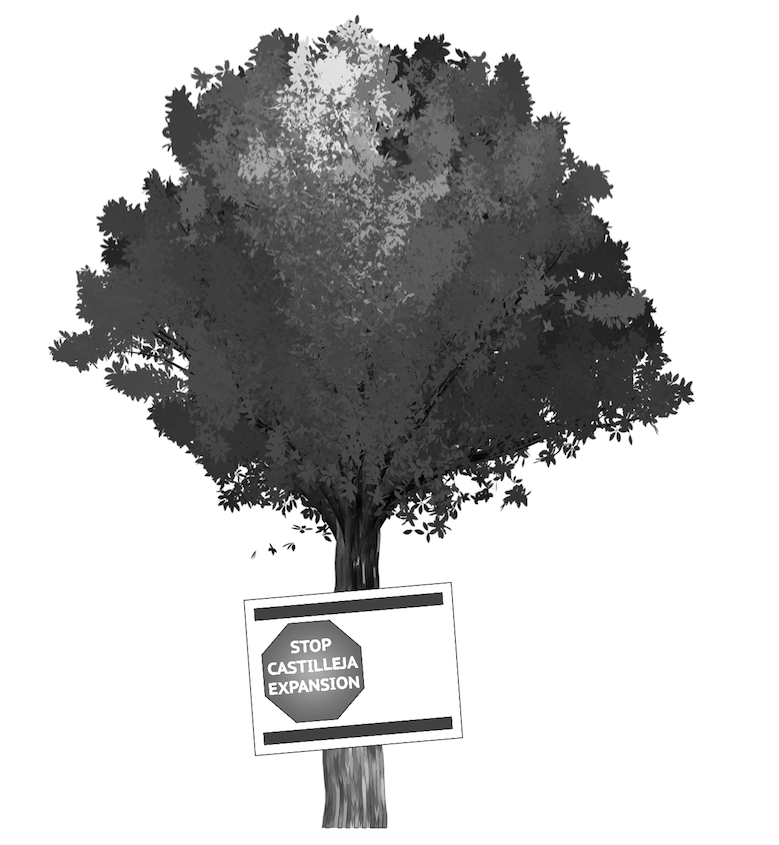 “That [2012] was a hard time for us, and I’d get up in front of the student body and I’d say to them, ‘Look, Castilleja is not a good neighbor,” Kauffman says. “We over-enrolled, and we shouldn’t have done that. So we’re applying for a new permit.’”

The neighborhood group saw this over-enrollment as an intentional violation with hidden economic motives and great profits for Castilleja.

“If you’re adding students every year, that seems pretty intentional to me,” says Andie Reed, a member of PNQL.

With the permission of the city, Castilleja was allowed to freeze their enrollment at 438 students in 2015. The violation of the original CUP, however, has led to trust issues between the two sides.

“They have a history of not abiding by what they’re supposed to do,” Reed says.

With subsequent plans to increase even further on campus and residents’ objections to plans that would violate the original CUP, the stage was set for a conflict between the two sides over the future of the school.

A feeling of mistrust towards Castilleja is prevalent throughout the PNQL group. For one, Castilleja says it has created five construction layouts and accommodated the concerns of the residents at each creation of a new plan, a claim which directly contradicts that of the residents.

Steinberg stated that he “has never worked with a plan that has tried harder [to accommodate residents]. If it [the expansion plan] is not pleasing 100 percent of the people, they [Castilleja] certainly have made a tremendous effort.”

“They [Castilleja] were touting [it] as if the school had put neighborhood input into this [the plan],” Reed says.

More contradictions arise throughout the history of this interaction. For example, last year, Castilleja decided to cut down a redwood tree, which the Palo Alto City arborist diagnosed as diseased and as a danger to the student body. PNQL questioned the motives for this action, as the redwood tree was in the direct path of Castilleja’s proposed parking garage entrance. Believing that Castilleja’s motives were tainted, the PNQL hired their own arborist to investigate the tree. The residents’ subsequently stated that the tree did not need to be removed. While the tree was eventually taken down, the residents claim that the tree did not actually suffer from any disease.

“It [the tree] wasn’t in any danger of falling down,” Reed says.

Such an incident only added to the lack of trust of between the two parties, and served as fuel to the fire.

Effects of the falling out

The conflict between the residents and the school has elicited negative reactions from both sides regarding the contradictions in their experiences of the conflict. As the conflict continues, PNQL signs denouncing Castilleja construction continue to multiply across Palo Alto front lawns, and Castilleja continues to push forward with their construction plans, with each side believing that they are right.

Kauffman touches on the effects that PNQL and their signs have had on the school environment and Castilleja’s students in light of other problems the community faces.

“I will say that the younger girls don’t quite understand, but the older girls, they wonder,” Kauffman says. “It’s like, we’ve had an election, immigration problems, human rights violations. There are so many issues that we’re all confronted with and very concerned about…,” Kauffman says. “It’s hard for them to understand how this can be so important to the neighbors who live near the school.”

On the other side, Reed says that the members of PNQL fully respect Castilleja and their mission — they are concerned with the school’s actions regarding the planned construction. For the neighbors, the Castilleja expansion is a crucial issue for the Palo Alto community which will have as much of an impact as seemingly “greater” national issues like immigration.

Click on image to read more about the Castilleja School’s expansion plans.

Attempts to spread publicity about the project have also had an impact. As of late April, Kauffman says that Castilleja was just starting to get the word out about their construction plans.

“We’ll be having to make more of an effort to get the word out,” Kauffman says. “Some of our families are really upset with us that we hadn’t done it sooner.”

PNQL has already made several public statements with their petition and the more than 250 “Stop Castilleja Expansion” signs that line Embarcadero Road. However, Reed paints a different picture of Castilleja’s and the PNQL’s publicity attempts.

“They [Castilleja] are much more adept at PR [public relations] than we are, and how to spin it,” Reed says.

As the dialogue between Castilleja and the PNQL continues, there is hope for a more collaborative discussion.

“We don’t want to make this a divisive moment in Palo Alto,” Kauffman says. “For us, we’re just going to keep moving forward with our application.”

Kauffman goes on to add that she believes the conflict with the neighbors will improve once Castilleja begins to focus on publicity and informing city residents of their plans, as a main goal of the school is to conserve the neighborhood quality of life during and after construction.

“I don’t want to be depicted in any way as being against the neighbors,” Kauffman says. “I think most of them are misinformed.”

For the residents, until the plans exclude so-called invasive features like an underground parking garage, it will be difficult to come to a consensus. Kimberley Wong, a member of the PNQL, believes there needs to be more consideration for what the neighborhood can actually handle, not just what Castilleja wants to do.

No matter the conclusion of this debate, it’s clear that the result of Castilleja versus PNQL will have lasting ramifications for the Palo Alto growth-versus-residents debate. Whether the city chooses to grant Castilleja a new CUP or is swayed by the indignant cries of the residents, they will set a precedent for the future that determines whether our city will continue to expand or preserve its existing neighborhoods in the years to come.

For now, Kauffman and the neighborhood residents are focused on the city’s upcoming decision on Castilleja’s CUP. Standing in the hallway outside the Castilleja conference room, Kauffman stares pensively at the wall of Castilleja graduating class pictures. Through her eyes, we see her ideal future — a class of 540 graduating girls smiling in neat rows, another 125 girls being educated at Castilleja. As she escorts us out of Castilleja’s main office, she gazes out at the black and red signs professing “Stop Castilleja Expansion” and “Protect Neighborhood Quality of Life” which line the street. She is back in the present.