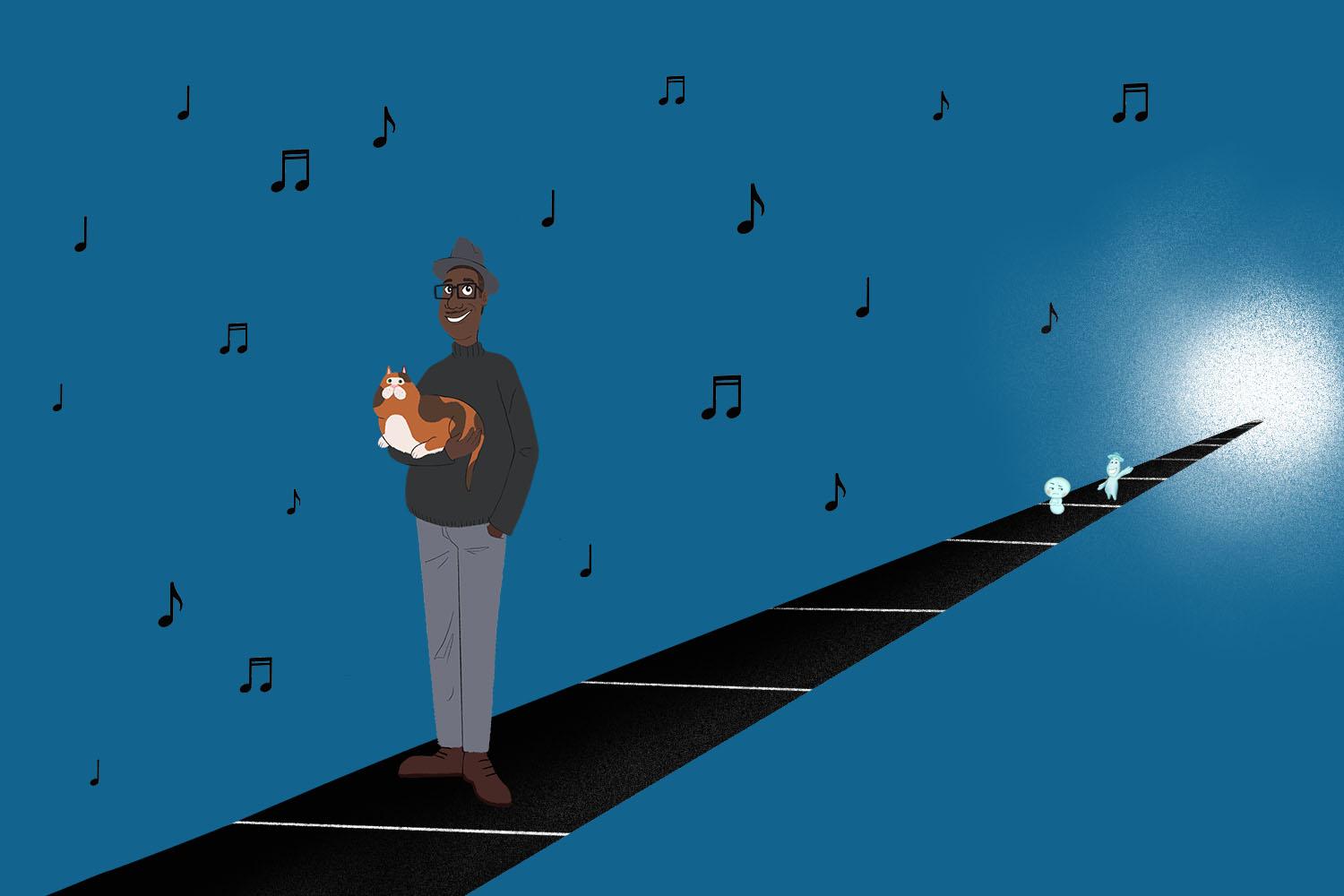 An out-of-tune melody bounces around the room as movie protagonist Joe Gardner struggles to conduct a dysfunctional middle school band. In the dimly lit classroom, students in front of him slouch in their chairs, surrounded by beige walls with some music posters pinned up in a desperate attempt at decor.

Amid the dreary environment, Gardner’s eyes shine with his passion for music as he guides the students through the notes. But this average day of his monotonous life is about to take a turn.

After years of teaching middle school band and chasing after gigs with hopes of a music career, Gardner gets a chance to perform with a celebrity saxophonist. Ecstatic about the chance to finally pursue his dream career, Gardner cheerfully waltzes through the hectic streets of New York and…  dies?

He wakes up to find his soul on a long conveyor belt-like path towards the light — the Great Beyond, as it is called. Unwilling to accept his fate, Gardner breaks the rules and escapes off the path into an abyss. Traveling through dimensions, he tumbles into an unexpected life — and afterlife — changing adventure.

The film discusses a person’s purpose and the concept that each soul needs a “spark” which comes with the joy of discovering a passion, like playing soccer or the cello. Through this conversation, Disney and Pixar’s newest movie “Soul” tackles questions of the meaning of life, prompting introspection and reflection.

Since the movie’s release on Dec. 25, “Soul” has gained a reputation for its significant impact on audiences, including students at Palo Alto High School.

“The movie sent a strong message presenting how there is more than one path to happiness and success, impacting my image of success,” junior Sean Isayama said.

Isayama says he believes that “Soul” engages with issues prevalent in society today, especially in Palo Alto where students tend to correlate good grades with their success and happiness. With such superficial focuses, there seems to be a confusion about one’s purpose in life.

“It made me want to focus more on the present and enjoying the little things in life, rather than being stuck on my future.”

“Honestly, I did not think the movie would be as good as people said it was … but once I did [watch the movie], I loved it,” Lochead said. “It made me want to focus more on the present and enjoying the little things in life, rather than being stuck on my future.”

Aside from the impressive visuals and powerful message, Pixar goes a step further in its representation of Black Americans in “Soul.” While Black actors have voiced many characters in Pixar movies, they often play animals or voice supporting roles.

Gardner is the first Black lead character in a Pixar movie, making “Soul” the fourth American animated movie with Black characters in lead roles, according to the New York Times.

“It is always good to see more representation in movies so that kids these days are able to grow up relating to people they see and feeling connected to them,” Lochead said.

“Soul” isn’t the only movie with a deeper meaning that is veiled by its lighthearted animation. Previous Disney-Pixar movies such as “Inside Out” and “Coco” have also impressed audiences with the life lessons masterfully woven into the storyline.

These movies all deal with profound topics around relationships, prompting viewers to reevaluate their own priorities.

Whether it is traveling to the soul realm or walking through the streets of New York City, “Soul” transports the audience through their imagination on a jazzy adventure with a long-lasting impact.

“Soul” is available for streaming on Disney+.