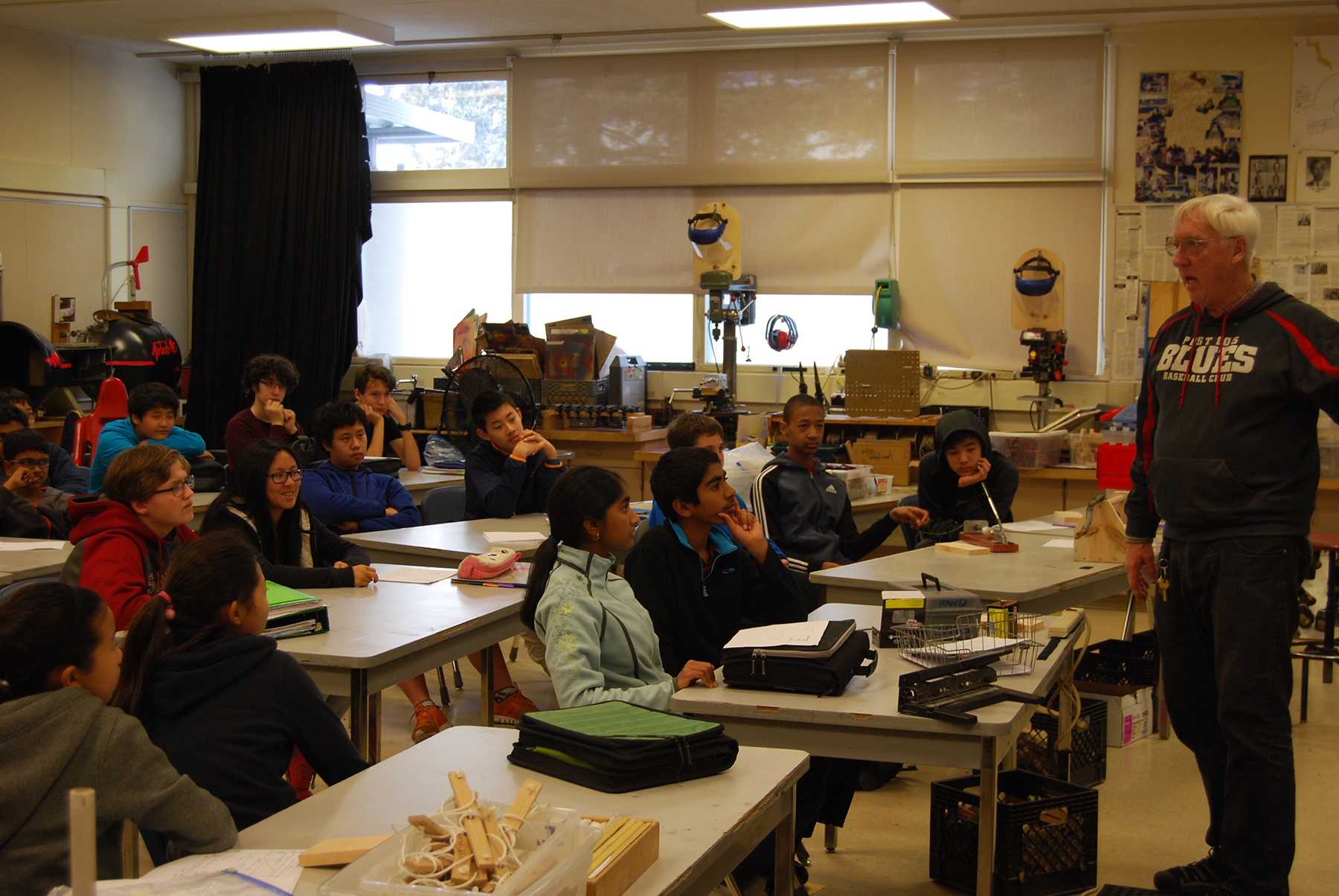 A circular saw’s high-pitched whine echoes off of the walls. Hammers thud up and down in time to an invisible rhythm. The smell of freshly applied varnish, still drying, slowly fills the room. These are sounds and sensations familiar to any respectable industrial workshop. And once, in a time now long gone, this same atmosphere could be found in middle and high schools across the nation. What was once a trade perhaps more applicable to entering the workforce than any other class has taken a backseat to standardized tests and the wave of STEM interest all too familiar to anyone who’s been in the Silicon Valley for long. But despite these changing interests, there exists a pocket of fabrication holding out. Nestled in the corner of Jane Lathrop Stanford Middle School, behind an unassuming, unmarked door, is Brad Booth’s domain: part classroom and part workshop. Here the spark of student creation persists.

Even now, some 30 years after their creation, Booth’s industrial technology classes (both levels, 1A and 1B) still operate at full capacity. Every seat in the room has an owner in every period Booth teaches, and it’s not uncommon for some students to be denied entrance to the class entirely. But despite the crowds of students to manage, Booth maintains a jovial authority that is as much passive oversight as active management.

Yet as casually as he sums up his teaching abilities, Booth’s skills have been years in the making. When he was a kid, he would take apart anything and everything he could get his hands on. What began with the remote control moved, first to musical instruments, then to the family car and eventually, motorcycles. To this day Booth maintains his passions outside of his class, fixing up old violins and repairing World War II-era motorcycles, sidecars and all.

So from the very beginning, Booth knew his calling in life was to design and to build. But the art of industrial tech is a two-part mix: a love for fabrication, and a passion for teaching. Booth found the second piece while still attending Cubberly High School. As part of a the school’s Idea Forum program, Booth was allowed to explore an interest separate from the school curriculum a few days a week. On a whim, he chose to pursue teaching, and found that his passion for bestowing the knowledge of his craft was a solid match with his thirst for learning more of it himself.

But the world outside the Silicon Valley’s bubble was calling, so Booth, inspired by the engineering pursuits the parents of the children he worked with were undertaking, left to be trained as a welder. What started as a straightforward career path as a worker on the Alaskan pipeline took a few sharp turns, first to Sweden to work on boats, then to a subsidiary of Volvo. But nothing stuck, mostly due to a conflict of interest Booth had with his work. So, he returned to the Bay Area to seek out the satisfaction of teaching he had found so long before.

However, on returning, Booth found that life in his old home was more rough-and-tumble than traveling the world had been. After working as a shop class teacher for just a few months in South San Francisco, he was riffed on payment and laid off.

“So I wasn’t fired for being a bad guy, although I might’ve been a bad guy,” Booth says. “And so they told me not to worry, that they were sure I’d get hired back, and I said, ‘Screw that, I’m not gonna sit around and find that out come September.’ So I threw out my resume and got called up [for the job at JLS.]”

Booth’s arrival to JLS in 1990 was a textbook case of a move out of the frying pan and into the fire. Called in to modernize the school’s shop classes to be on par with those of Jordan and Terman, Booth instead found that the project would be more than just a simple repair job. 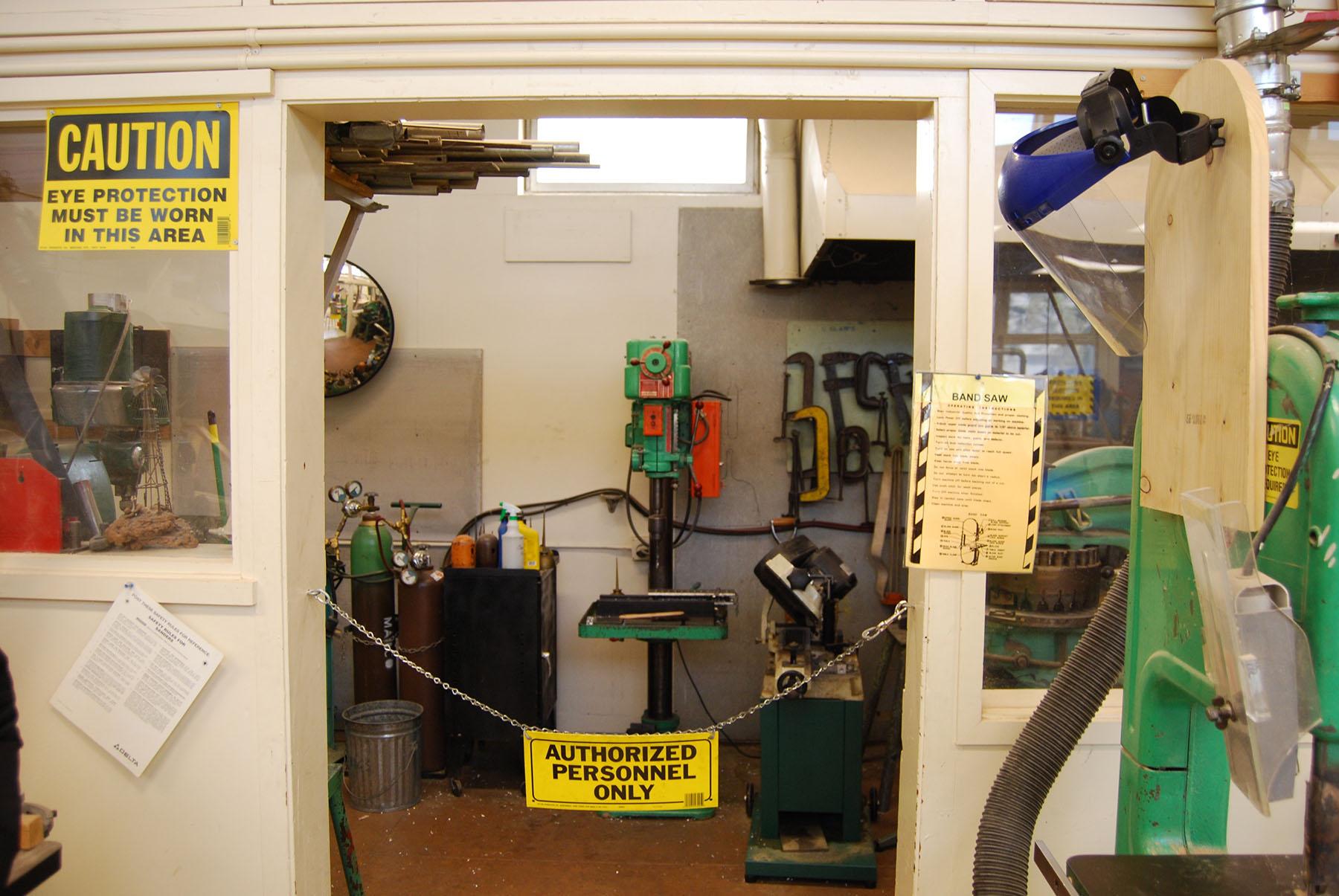 “What they had done is they had totally trashed the wood shop, the drafting program, and the metalworking program. And the wood shop was becoming an art facility, and they had sold off all of the traditional equipment. So I was hired to come in and create something out of the ashes.”

What little equipment the shop class had seemed to be there on accident, the current teacher vehemently resisted any and all change, and to top it off, there weren’t enough tables to accommodate the students. So Booth did what he had spent all those years training for and got to work building something he could be proud of.

It began with the tables — 14 of them, built by hand. Next came the computers. With sustainable funding an uncertainty, Booth built workstations for computer-aided design simultaneously as the money for them came in until he had a sizable fleet for prototyping. Finally (and most crucially) were the tools. The largest expense of the room, Booth’s power tools are also some of the oldest. Again limited by the dubiousness of his classes’ grant money, his only options were to maintain the tools he had inherited from the old class as best he could.

“The machines that are over there that are from the 50’s — the only reason they’re still here is because no one would buy them in the auction,” Booth says. “So we inherited that.”

Change came to the classroom slowly but surely. Over the course of a few years, Booth built woodworking, metalworking and even 3D printing facilities where once there had been nothing. Not to mention the illustrious Electric Moose car program.

Produced in 1994 on a recommendation from fellow Palo Alto builder Bob Schneeveis, the Electric Moose program has quickly become one of not only Booth’s, but JLS’s crowning achievements. Students in the program, tasked with building a solar-powered car, work outside of class hours in a close-knit team. Eventually, they demonstrate the product of their efforts to the grades beneath them, starting the cycle anew. An entire section of the valuable real estate in Booth’s room is dedicated to the awards, accolades and attention from the press that the program garners — not to mention the various moose imagery strewn about the space.

But for all the success Booth has enjoyed in building up his own personal shrine to the art of craftsmanship, his story is tragically scarce. Rather than the upswing on engineering and technical skills expected in the wake of the wave of STEM interest, industrial tech has been typecast as a class built for students not intending to go down the college track. Part of it has been because of the homogenization of the engineering population in the Silicon Valley, a trend Booth witnessed himself.

“There was a time in this town when the town was full of mechanical engineers,” Booth says. “And then it was full of aerospace engineers, Lockheed, space and missiles stuff like that, and electrical engineers. And then on came software, and on came hardware. So there was a time when you had it all, so the place was unbelievably versatile. And now, more and more so, many of the tool processes, for the most part, have disappeared. So people are theoretical, but they don’t actually know how to execute.”

Though that only speaks for the Silicon Valley, the numbers don’t lie — students everywhere are making less. A startling 72 percent of students have never taken a shop class, while 83 percent say they work with their hands less than one or two hours per week, according to a study published by the Nuts and Bolts Foundation in 2009. Pinpointing exactly why is a hazy guess at best. There’s an entire line-up of suspects. For one, shop classes require more space. Booth’s room is about four times the size of a standard classroom. In addition, the cost for a drill press, lathe and belt sander can quickly add up to more than that of other electives, such as home economics. And finally, the accidents. Booth has kept his class running by staying careful and sticking by his own personal cardinal rules, the most important of which: no accidents.

“One thing is you can’t have accidents,” Booth says. “Accidents are the kiss of death . . . Good news spreads at one speed and bad news spreads a lot quicker”.

His words ring true — it’s much easier to point to a grisly accident than to the myriad of student successes that shop classes can generate. Booth, for his part, has kept mishaps to a minimum by assigning his students projects that build on each other iteratively, so the engineers-to-be are never faced with a tool they haven’t already practiced with. But for all of his teaching, Booth really has just one goal in mind.

“I was trying to figure out how to teach kids to see the sum of the whole,” Booth says.

That is, realizing that the world around them is not one vast, unapproachable machine but instead an assembly of bits and pieces. And through developing an understanding that they, too, can have a hand in its construction, Booth hopes to impart that building something of their own is as easy as stepping back and seeing the bigger picture, as he did all those years ago.