A clamorous buzz fills the air as bees weave intricate patterns around a small, dollhouse-shaped hive topped with a wooden roof. Dressed in a white jumpsuit and hat, his face masked by protective netting, Palo Alto High School junior Alex Evans opens the hive to reveal a colony of striped anthophila, which is the latinate name for bees. The sound crescendos as bees crawl around the frame covered in hexagonal honeycombs.

Evans is part of a community of beekeepers in the Bay Area and is surprisingly young compared to the rest. Even rarer is Evans’ passion for urban beekeeping, which, according to PBS News, although uncommon, is on the incline due to the health benefits of the bees in such colonies.

Though Evans only began beekeeping in 2015, the origins of his beekeeping dreams date all the way back to 2012.

“I had a neighbor that did beekeeping,” Evans says. He was immediately intrigued and began doing some research of his own.

“Three years later, I [had] another neighbor that [started] doing beekeeping and he actually [sold] bees too. So I picked out a small hive.”

Before delving into beekeeping, Evans investigated species and caretaking techniques. 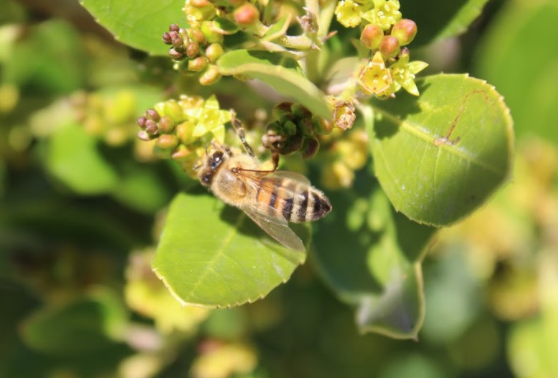 “I did research before I actually bought my colony,” Evans says. “I bought Russian bees that were developed in Siberia. There are so many varieties and each have different behaviors. I got them because they’re very active bees.”

After proving his responsibility, Evans received a small budget from his mother to start his own hive.

“I used to be nervous when first working with bees but I’ve learned to get comfortable, even if it means getting stung once or twice,” Evans says.

He started with a small hive in Marin, where his mother lives, but the hive quickly began expanding.

“They just kept growing so we had to split the hive into two,” Evans says. “What you do is you have to separate the population, so one has a queen and the other doesn’t … they [were] able to recreate another queen and that created two hives with two queens.”

“I used to be nervous when first working with bees but I’ve learned to get comfortable, even if it means getting stung once or twice,” Evans says.

“I used to be nervous when first working with bees but I’ve learned to get comfortable, even if it means getting stung once or twice.”

Within a year, the hive had become too big to sustain and Evans had to carry out the daunting process again, splitting one of his hives. Evans transported one hive to Palo Alto, and he now owns three hives: two large hives in Marin with between 10,000 and 20,000 bees, and a smaller hive in Palo Alto with about 5,000 bees.

Evans wears his beekeeping suit to check on the bees, scraping off the honeycombs in the spring and feeding the bees sugar water in the winter. To calm the bees, Evans uses a bee smoker, especially in the winter when the bees are angrier. He notes that the smoke, made from burnt foliage, eases the bees’ nervous system but does not harm them.

Over time, Evans has turned his beekeeping hobby into a full-fledged honey business, in which he collects, de-crystallizes and jars honey that he collects.

“Extracting honey can be a real hazard, but it’s also a good experience,” Evans says. “It’s really beautiful to go into the hive and see that there’s a ton of honeycomb.” 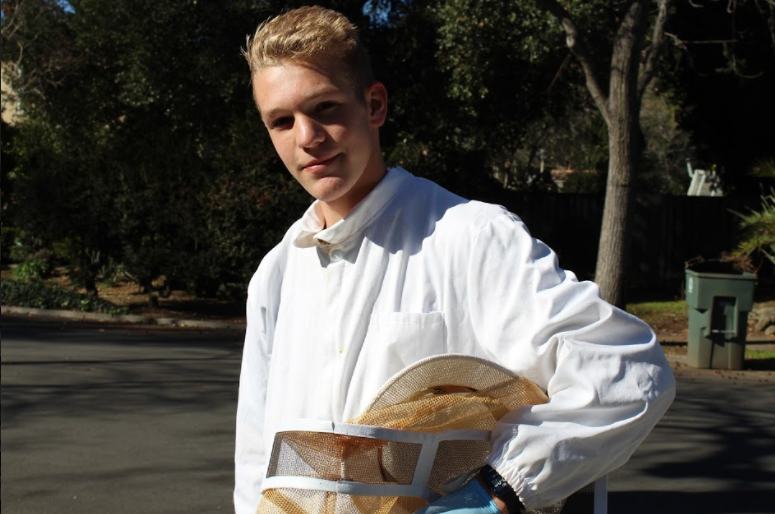 Before the honey is jarred and sold, Evans must execute a long process to collect honeycombs.

“So what you want to do is cut off the all the caps of the comb, and sometimes it takes up to four hours to get it all,” Evans says.

Evans sells this pure honey both in Palo Alto and in Marin.

“Mostly it’s really local,” Evans says. “There’s a lot of beekeepers … where I live in Marin so we trade or sell each other’s honey.”

However, in Palo Alto, he draws in customers through an app called Nextdoor, which helps aspiring entrepreneurs gain a customer base in their neighborhood.

Apart from the business side of his beekeeping endeavor, Evans is also working to repopulate and protect the local bee population.

Between 2016 and 2017, the United States lost 33 percent of bee colonies, according to an annual survey done at Bee Informed, in partnership with the University of Maryland.

“There’s been a huge decline in honeybees, especially in rural areas because of pesticides and high transportation,” Evans says. 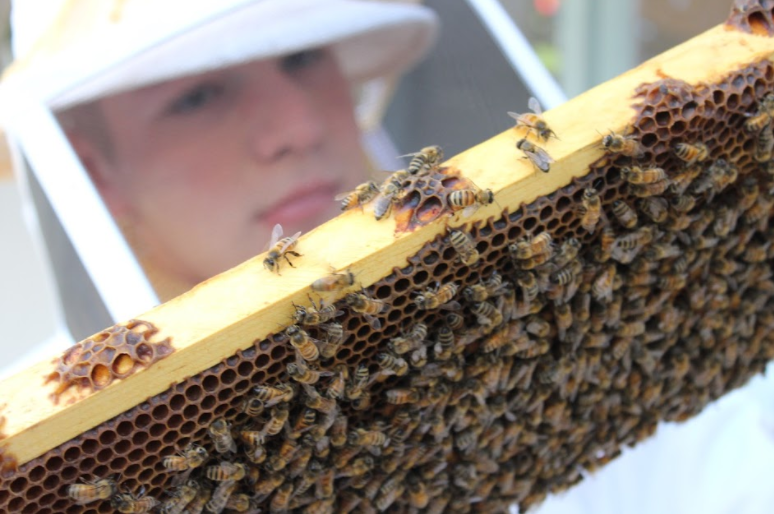 He encourages urban beekeeping, which he believes is essential for the long-term survival of the bee population. According to Evans, in single-crop rural areas, pesticides cause disease, while bees that live in areas with diversified plants tend to be healthier.

“I think it’s really interesting if you do city beekeeping … [it’s] better for the bees because they’re introduced to a wider variety of plants,” Evans says. “It’s such a strange idea, but they’re thriving in these really urban places.”

For those seeking to pursue beekeeping in the future, Evans offers some advice.

“Talk to professionals about where you get your bees,” he says. “You want a healthy colony.”

After graduating high school, Evans plans to pass on his business to his younger brother.

“Once I finish college it would be interesting to restart the beekeeping and continue the hobby,” Evans says. “Bees are not leaving our family anytime soon.”