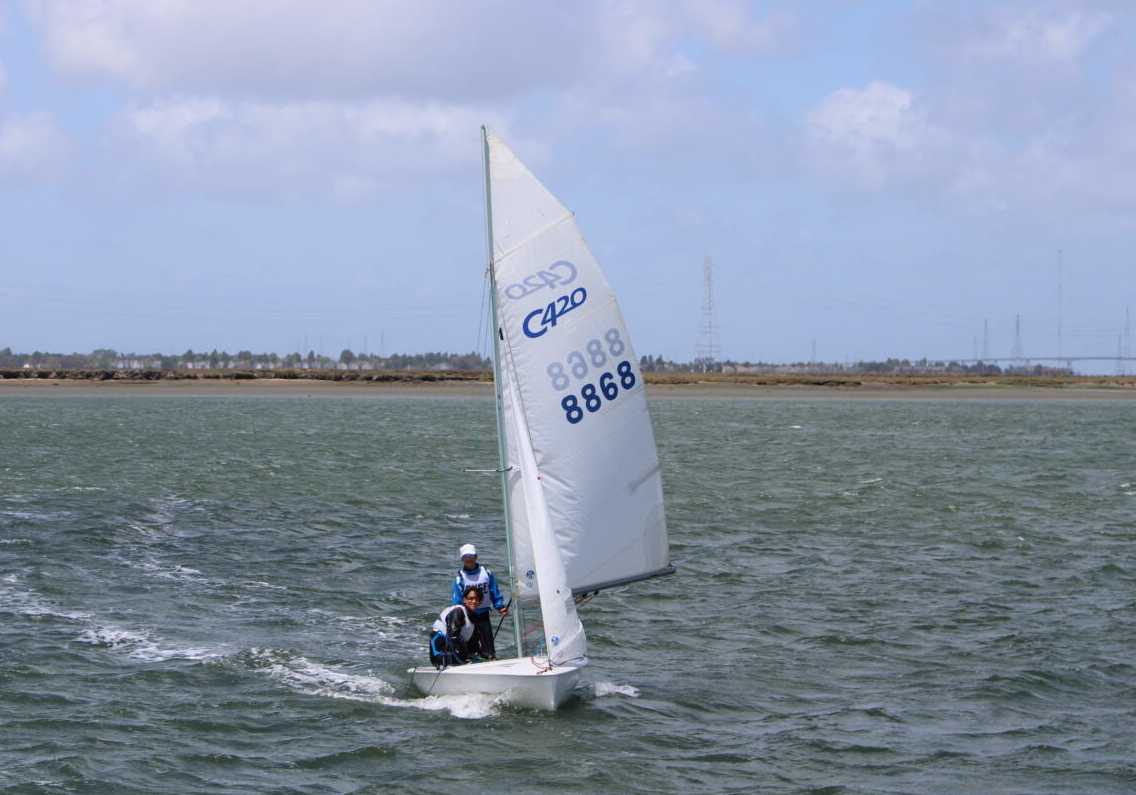 PRACTICE MAKES PERFECT — Junior Nati Grinkrug sails a C420 sailboat during a regular sailing practice. Grinkrug’s passion for the mental and physical activity required in sailing inspired him to encourage other students to take up sailing. “Paly hasn’t really ever had a sailing team,” Grinkrug said. “I got enough people to join the club for us to have one.” Photo: Yash Shetty

Battling potent winds and splashing waves that threaten to capsize his boat, Palo Alto High School junior Nati Grinkrug holds on to the mast of the C420 dinghy, steering his vessel with expert dexterity. Though the sun shines overhead and reflects brightly onto the choppy water below, Grinkrug remains calm and focused.

Grinkrug is one of few Paly students who participate in the unique sport of sailing. This year, he started a local sailing team and currently serves as team captain. Inspired by his own passion for the sport, Grinkrug hopes to encourage others to give sailing a try.

Grinkrug was first introduced to sailing through a family babysitter and after trying it out, was immediately drawn to the sport.

“I really appreciate it as a sport for both the mind and the body,” Grinkrug said. “It’s a very physical sport, and I’m completely worn out at the end of a full day of sailing, but at the same time it’s also very mentally engaging.”

Freshman Lorenzo Maino, another member of Grinkrug’s sailing team, has been sailing since elementary school.

“It’s fun to work together on a single boat, and having two people control one boat makes it complicated and interesting.”

“I got into sailing because of my dad,” Maino said. “He’s had a boat since before I was born and we used to go out on it.”

Both Maino and Grinkrug currently sail at Peninsula Youth Sailing Foundation in Redwood City, where they practice three times a week during the November to February sailing season.

Maino said that a typical sailing practice consists of multiple different exercises both on and off the water.

“In a typical practice we arrive, rig and then get on the water and we run drills and races and a coach follows you upwind to help with boat speed,” Maino said. “When you get back on land, you usually get a debrief on the tactical aspect and then de-rig.”

A high school divisional sailing competition, or a regatta, consists of splitting each school’s team into two divisions: A and B. There are two or three people per boat and each team races the other boats in order to make it to a given finish line. For the regattas Maino and Grinkrug compete in, there are two sailors assigned to each boat.

“It’s fun to work together on a single boat, and having two people control one boat makes it complicated and interesting,” Maino said. “I like the team-play aspect of a double-handed boat and how there are a lot of tactics involved in racing.”

Grinkrug and the Paly sailing team recently participated in the NorCal Divisional Championship, which took place at the end of spring break.

“Paly ranked third overall and I ranked second in my division out of 14 boats, so it was a pretty good score,” Grinkrug said.

“Generally, most people are really nice and just open to talk and help each other.“

Once the boats hit the water, the strategic component of sailing becomes essential to win a race and adds an element of complexity to the sport.

“On the water, it can get a bit more brutal, because you can use the rules to your advantage,” Grinkrug said. “If you know the rules really well, you can figure out ways to kind of abuse them and gain an advantage over other boats. You’ll hear a lot more yelling off-shore, but we all know it’s in good fun.”

Although there is a culture of competitiveness around regattas, Grinkrug said that competitors are typically good-natured once the race is over.

“If you know the rules really well, you can figure out ways to kind of abuse them and gain an advantage over other boats.”

“Generally, most people are really nice and just open to talk and help each other,” Grinkrug said. “The culture is that, as soon as you get on land and you’ve gotten your boat out of the water, you come and help everybody else.”

“I’m looking for as many people as possible, because then we could do better and attend more competitions,” Grinkrug said. “I would encourage people to go on the PYSF [Peninsula Youth Sailing Foundation] website if they want to learn more about the club specifically and then, join high school sailing — there’s no experience needed.”