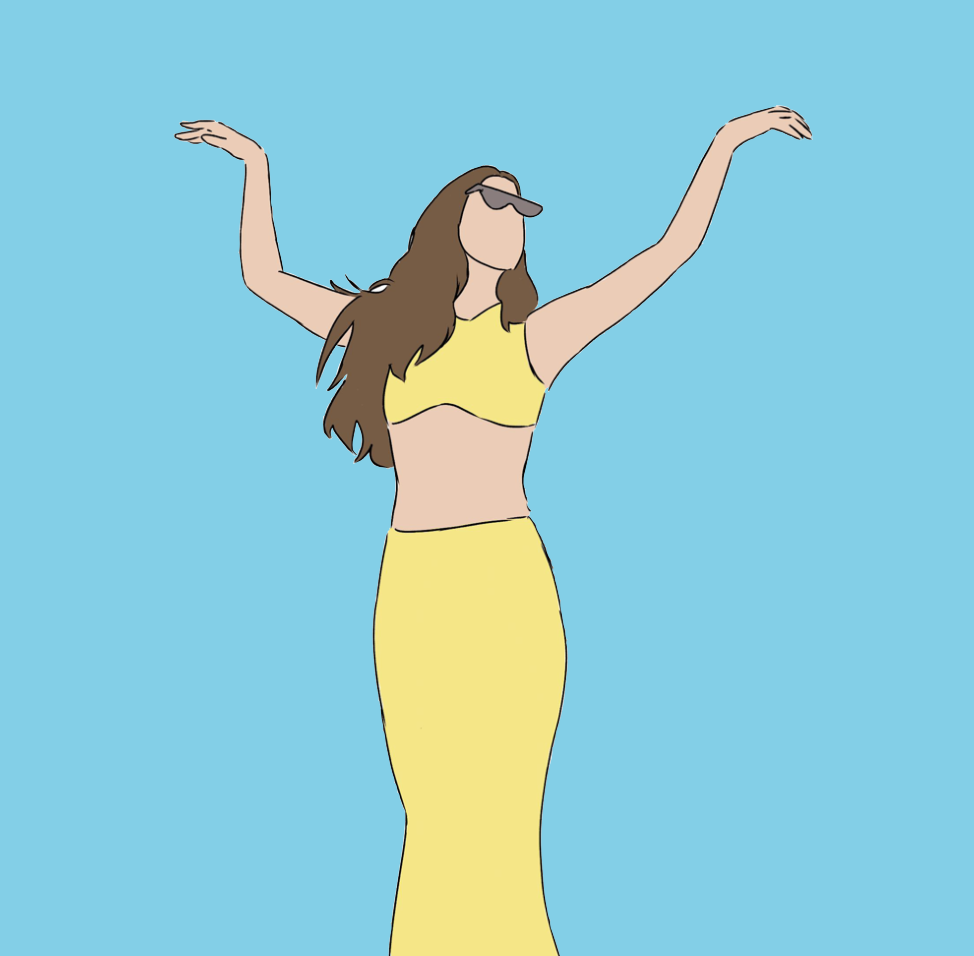 Dancing on a beach in a flowing yellow skirt, Lorde projects enthusiasm and joy. Behind gold-patterned sunglasses, she basks in the sunlight, singing, “I hate the winter, can’t stand the cold.” This adjective scene is a powerful moment from her music video for “Solar Power,” the title track of her newest album released in August.

Lorde wrote “Royals,” her most streamed song on Spotify, when she was 16 years old. On Aug. 20, over seven years after the debut of “Royals,” she released “Solar Power,” a pivot from the music she has released in the past. This newest album is bright, mellow and less radio-friendly, although her breathy whisper-like singing on the track “Solar Power” can still be found on some stations intended for trendy coffeehouses.

The change in her sound has not gone unnoticed by fans. Junior Jonathan Wang started listening to Lorde around the release of her 2017 album “Melodrama.” He would not pick “Solar Power” as his favorite Lorde album and said he believes it is less poignant than the music Lorde released when she was a teenager.

“I feel like ‘Melodrama’ was probably the most relatable, even ‘Pure Heroine’ was more relatable because it was dealing with things like adolescence,” Wang said. “[Solar Power] is different. But you know, it’s still good.”

Sophomore Anna Van Riesen said she also picked up on the change in Lorde’s music.

“I think [‘Solar Power’] might connect to a different audience [than teenagers], the same audience as before, but now they’ve grown up,” Van Riesen said. “The people who are her age and her first fans when she appeared in 2014 are probably mid-twenties now. She is singing about her life, but she’s older than us and has had different life experiences.”

With “Solar Power,” Lorde succeeds in exploring a range of topics from climate change to summer fun to losing a pet, all to the tune of bright and contemplative music. Her sound has changed since the first album she recorded at sixteen, but her new music stands strong on its own. In her own words on “Stoned at the Nail Salon,” Lorde sings, “All the music you loved at sixteen, you’ll grow out of.”

According to Spotify’s Storyline feature, Lorde relies more on her backing instruments on this album than ever before. Nowhere is that more clear than on her song “Solar Power.”

“We were really lucky to have an incredible drummer work on this album,” Lorde wrote. “He [Matt Chamberlain] really brought this album to life.”

“I think [‘Solar Power’] might connect to a different audience [than teenagers], the same audience as before, but now they’ve grown up.”

Many mainstream songs today have extraneous noise and background music that can make it difficult for a casual listener to pick out separate elements, but “Solar Power” begins with Lorde quietly singing and sounds of an acoustic guitar. In the final chorus, Lorde sings the song title with backing vocals from well-known indie artists Phoebe Bridgers and Clairo. Listening to the song evokes imagery of stepping out into the sunlight and slowly warming up to enjoy a summer day.

As the first single released before her album came out, “Solar Power” shocked many fans of Lorde’s previous work. Neither of her first two albums, “Pure Heroine” or “Melodrama,” could be described in any given moment as joyful, while “Solar Power” spends considerable time in that realm. But the melancholy of many of Lorde’s earlier songs has not been completely left behind.

Stoned at the Nail Salon

Vaguely reminiscent of “Ribs,” a thoughtfully sad song from her first album, “Stoned at the Nail Salon” proves Lorde has not deviated from her brand to the extent that her new music isn’t still immediately recognizable. The fear of time passing is a theme present in both songs, written eight years apart. But now Lorde has more perspective, and “Stoned at the Nail Salon” never reaches the emotional lows that “Ribs” did.

“I love this life that I have, the vine hanging over the door,” she sings. On this album, Lorde’s songs feel more self-assured. For her younger listeners who haven’t achieved that peace, it can make her songs slightly less relatable.

“There’s still a lot of rather dark, or at least intense topics in this album,” Van Riesen said. “But it’s just a different kind of vibe of music [than her old music,] it’s a little more boring.”

A standout from the album, “Fallen Fruit” layers vocals to make a sweet-sounding, vaguely mournful song about our generation’s relationship with nature in the light of the climate crisis. As a song by itself, without considering the meaning behind the words, it’s a relaxing tune, but the imagery of dancing on fallen fruit gives it a sour taste.

Written by Lorde about her dog before he died, “Big Star” is one of the sweetest songs on the album. For anyone familiar with the feeling of loss, the song captures the bittersweet emotions of reminiscing about the good times while mourning the loss of a loving companion.

“I feel like it’s probably the most personal song and I liked the guitar there,” Wang said. “It really was a pretty song.”

The background music softly reverberates behind her singing, emulating the mellow feeling of being underwater. We really don’t deserve the pure hearts of our canine companions and Lorde reflects on this truth in “Big Star.”

This song title could describe the feeling evoked by her entire album. The album is probably best enjoyed on a stroll by the ocean’s edge in the morning before the sun reaches its midday peak.

“I feel like it’s [‘Big Star’ is] probably the most personal song and I liked the guitar.”

Lorde is especially thoughtful throughout this song as she ponders if her hypothetical daughter would inherit her own qualities. It’s understandable how her new album might fail to resonate with younger listeners whose priorities starkly contrast Lorde’s. At 6 minutes and 40 seconds, the song is lengthy and possibly overindulgent, but it functions as encouragement for listeners to slow down and appreciate each moment as thoughtfully as Lorde does.