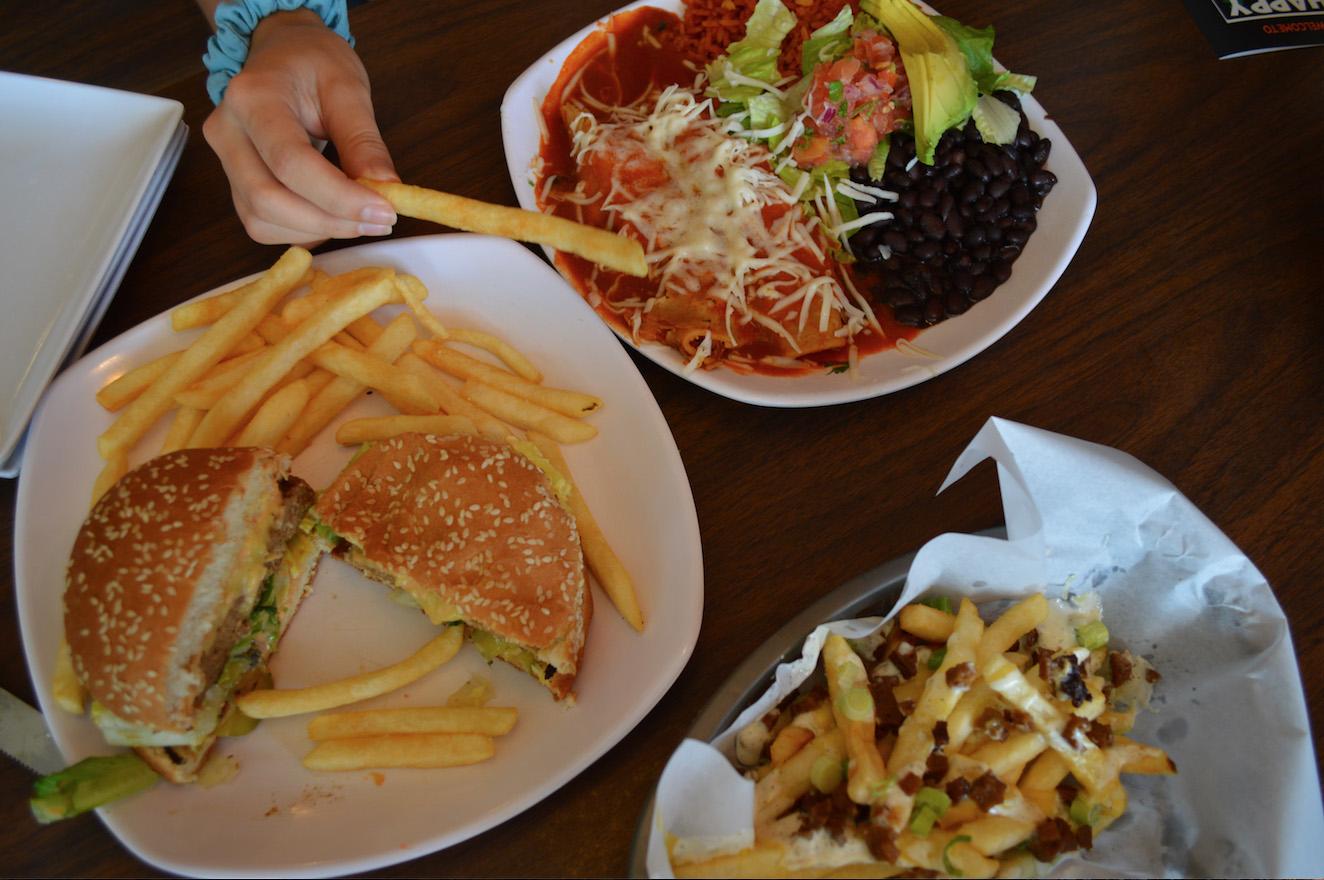 Burgers, cakes and Dumplings might not be what one would expect to find in a vegan restaurant, but among the commonly known vegan chains in the Bay Area such as Veggie Grill and Loving Hut, two lesser known, family-owned restaurants in the Bay Area boast both diverse and delicious vegan food and friendly owners who are eager to improve the planet and spread their message.

Despite its underwhelming surroundings, Happy Hooligans, nestled in a strip mall in San Jose, is surprisingly charming. Inside, an eclectic assortment of decorations line the walls, including animal paintings, fairy lights and a sign that reads: “veganism is magic.” The staff is friendly and quirky and the alternative music playing softly in the background creates a relaxing atmosphere.

Happy Hooligans owners Josh and Janice Whaley strive to make vegan food that is flavorful and that contradicts vegan stereotypes. 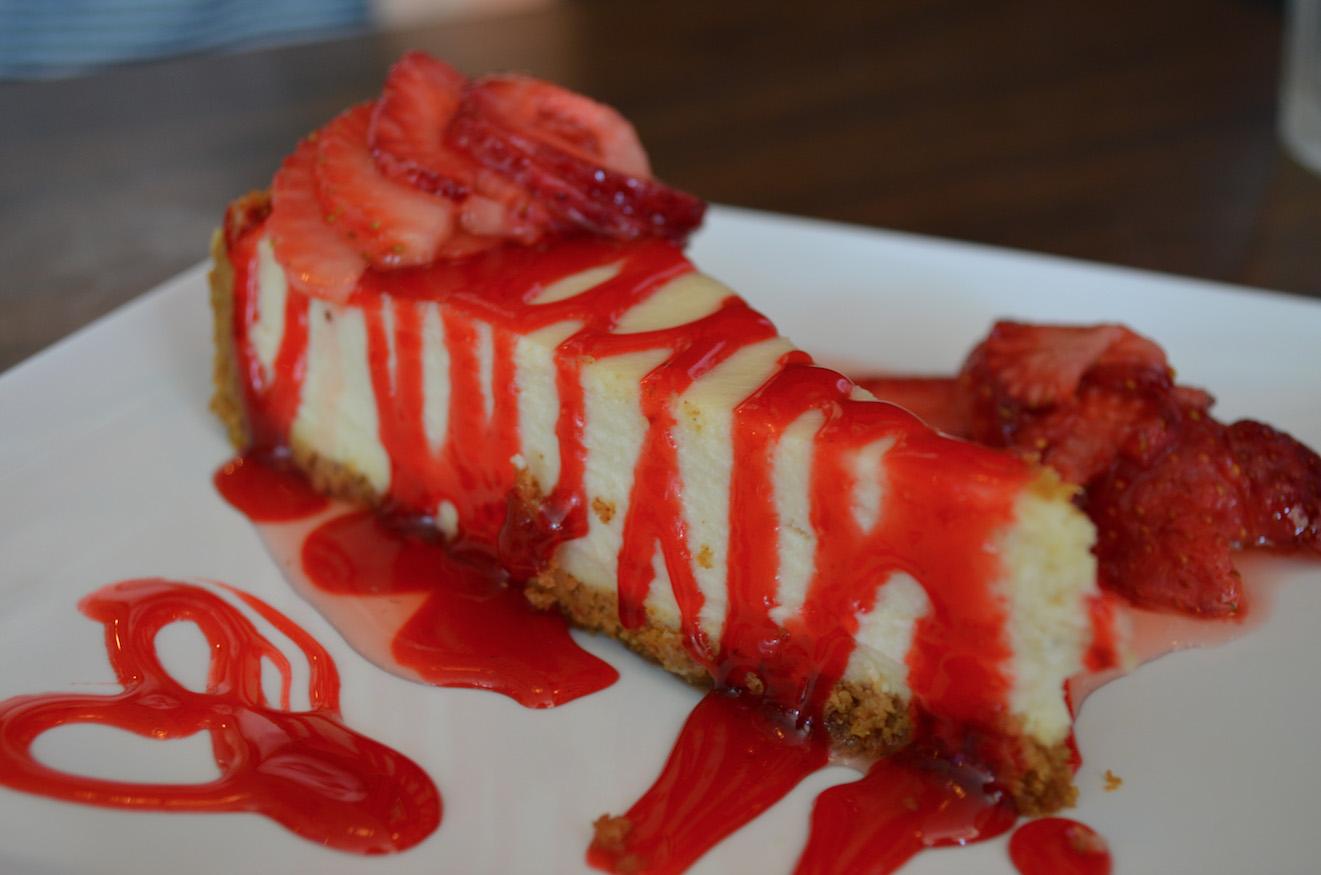 Rich, creamy and delicious, this Happy Hooligans cheesecake is topped with a sweet strawberry sauce.

“I wanted to show people that vegan food didn’t always have to be … healthy,” Janice Whaley says. “I wanted to show that you could do basically Carl’s Jr., but vegan, and have all of these things that you remember before you went vegan; [you are] still able to enjoy them but in a way that’s better for you, for the environment.”True to their word, the food is enticing with unusual flavor combinations. The menu consists of a wide range of appetizers and entrees including salads, sandwiches, vegan burgers and Mexican-inspired cuisine. In addition, Happy Hooligans offers breakfast options and even desserts, including a take on vegan cheesecake.

To start our meal, we tried the bacon ranch cheese fries ($6.95). The vegan bacon was smoky and savory with creamy ranch, a surprisingly cheesy sauce and crispy and flavorful fries. We found the Lennon burger ($10.50) slightly too salty, but overall chewy with a satisfying flavor. The star of the show was the jackfruit enchilada ($12.50). The cooked jackfruit had a satisfying, chewy texture contrasting with the slightly spicy enchilada sauce.

To finish our meal, we tried the vegan cheesecake ($4.75). The cheesecake was dense and creamy and served with a sweet strawberry sauce for a tangy twist.

Overall, despite the long drive, Happy Hooligans is worth a visit. It offers tasty food for vegans and non-vegans alike.

Acording to Janice Whaley, a vegan diet can have both a strong and positive effect on the world.

“[Veganism] is better for your health, it’s better for the environment. It’s one of the main ways that you can help save the destruction of global warming,” Janice Whaley says. “I feel it’s the way everyone has to go in order to save ourselves.” 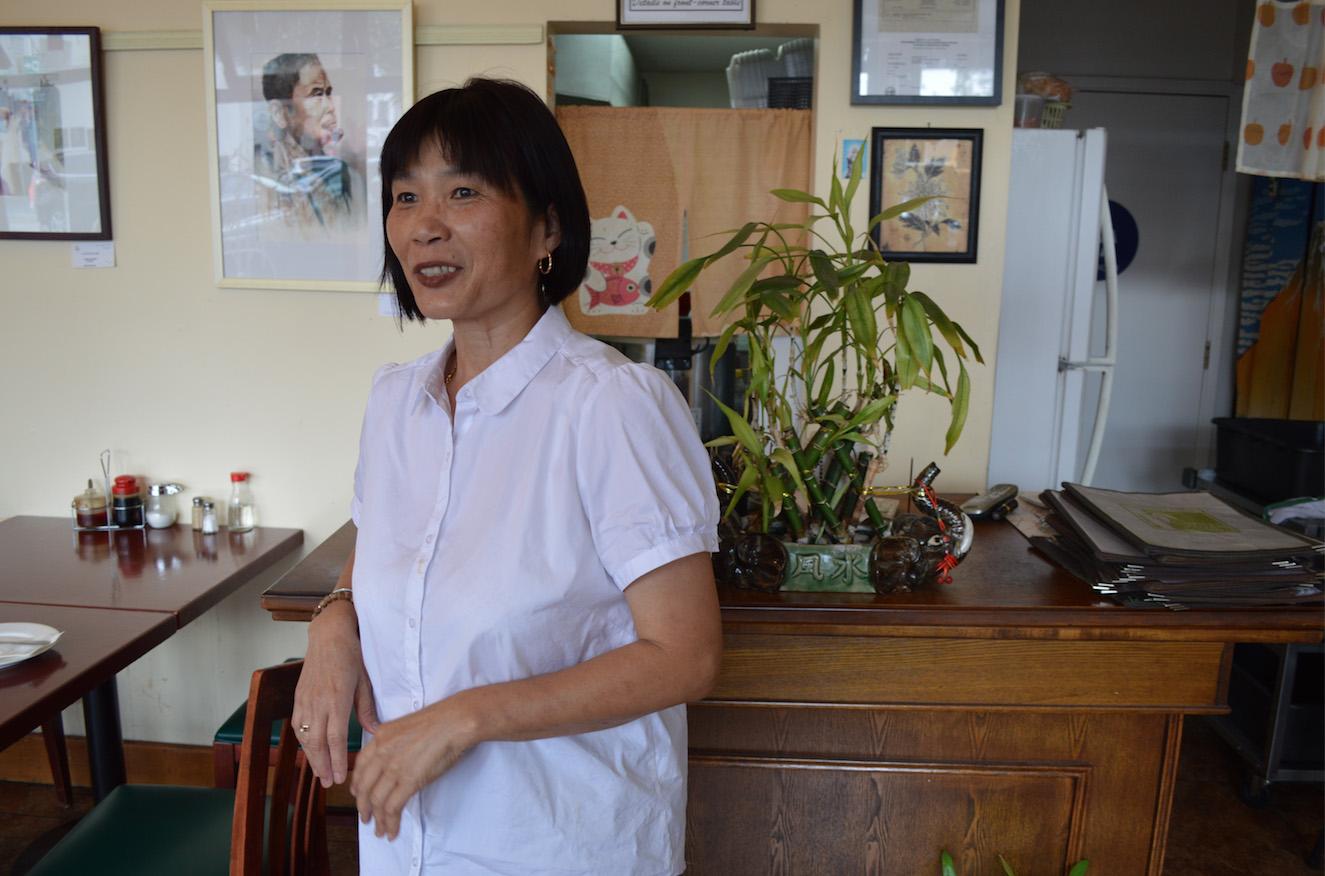 Alice Liang grins as new customers enter her restaurant, Garden Fresh, in downtown Palo Alto. Liang has been the owner of Garden Fresh since its opening in 2005 and also personally serves her customers on a daily basis.

Closer to Palo Alto High School is Garden Fresh in downtown Palo Alto. It’s easy to walk right past this small, charming restaurant, as the modest exterior with simple lights hanging from the roof doesn’t call out for attention. But venture inside, and you’ll find walls lined with attractive watercolor pieces and potted plants. Owners Alice and Robert Liang not only help out in the kitchens daily, but also interact with their customers on an unusual level ­— as their servers. Welcoming and full of stories, the Liangs say they wish to make a comfortable place for their customers in addition to having a positive effect on the planet.

“Of course, I’m vegetarian so the first thing I really wanted was a better world, a good environment and [to] protect all the animals,” Alice Liang says. “This is why I’m putting [the restaurant] into action.”

Our appetizer, Vegetable Potstickers ($6.95), had chopped vegetables inside a  crisp, pan-fried shell. The presence of so many vegetables made the dish refreshing rather than oily and heavy. The Sweet and Sour Veggie Dish ($11.95) includes pineapple along with broccoli, carrots and tofu in a pink-tinted sweet and sour sauce. 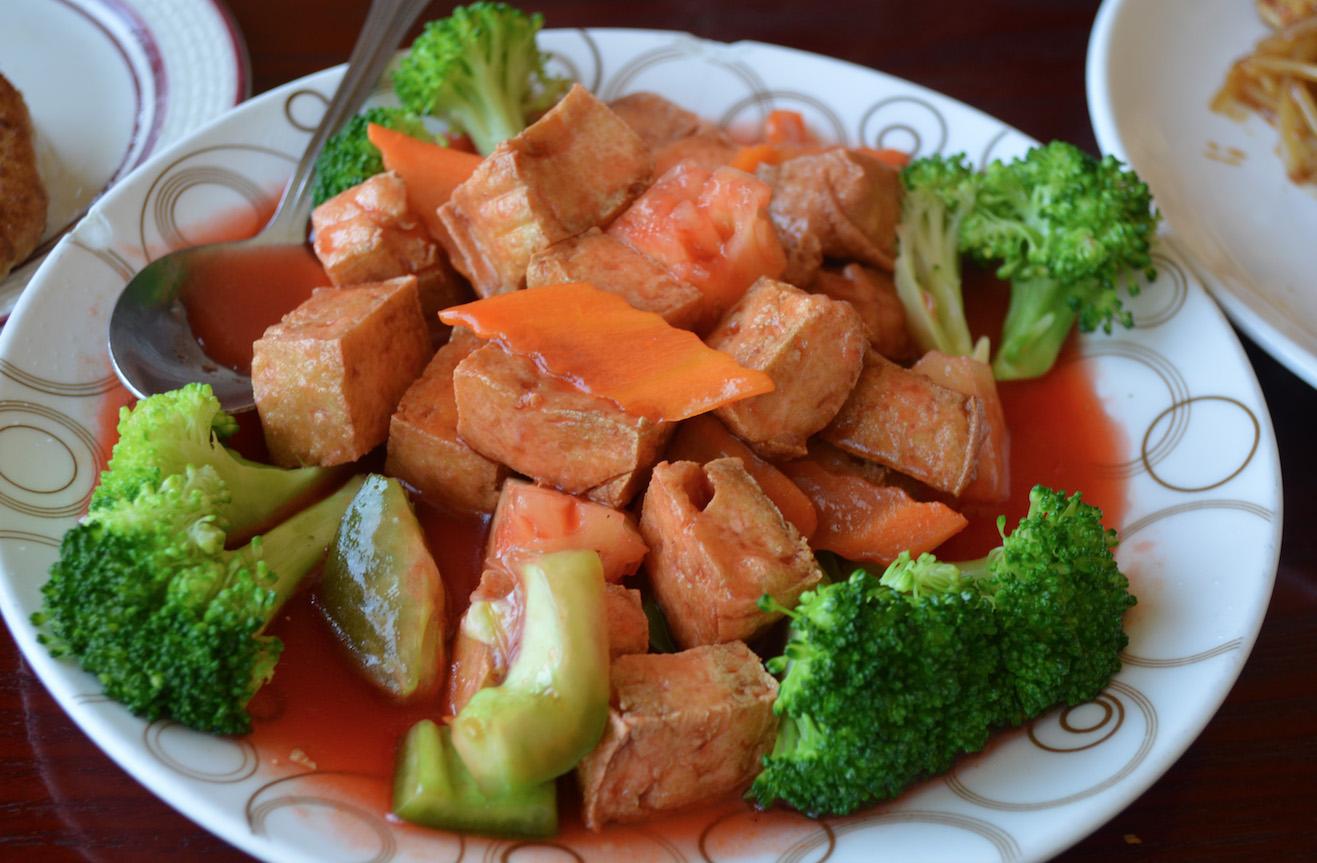 Slightly sweet with a spicy and flavorful sauce, Garden Fresh’s crispy tofu was served with fresh vegetables for a refreshing crunch.

Unlike other noodle dishes, the Veggie Chicken Chow Fun ($9.95) had a crunch from the bean sprouts, while still having a chewy texture from the wide noodles and the tofu. Its savory sauce also made it pleasantly spicy.

To end our meal with a touch of sweetness, we had the Vegan Chocolate Cake ($4.95). It had an appealing, simple frosting design, and the cake was sweet and rich.

Garden Fresh is a perfect local stop not only because of the quality of its food, which is simple and delicious, but also because of its owners who care deeply about their customers and want to make sure that they have a pleasant dining experience.

“I … talk to [the] customers and make them [feel] comfortable and happy until they finish the meal,” Alice Liang says. “They like it.”