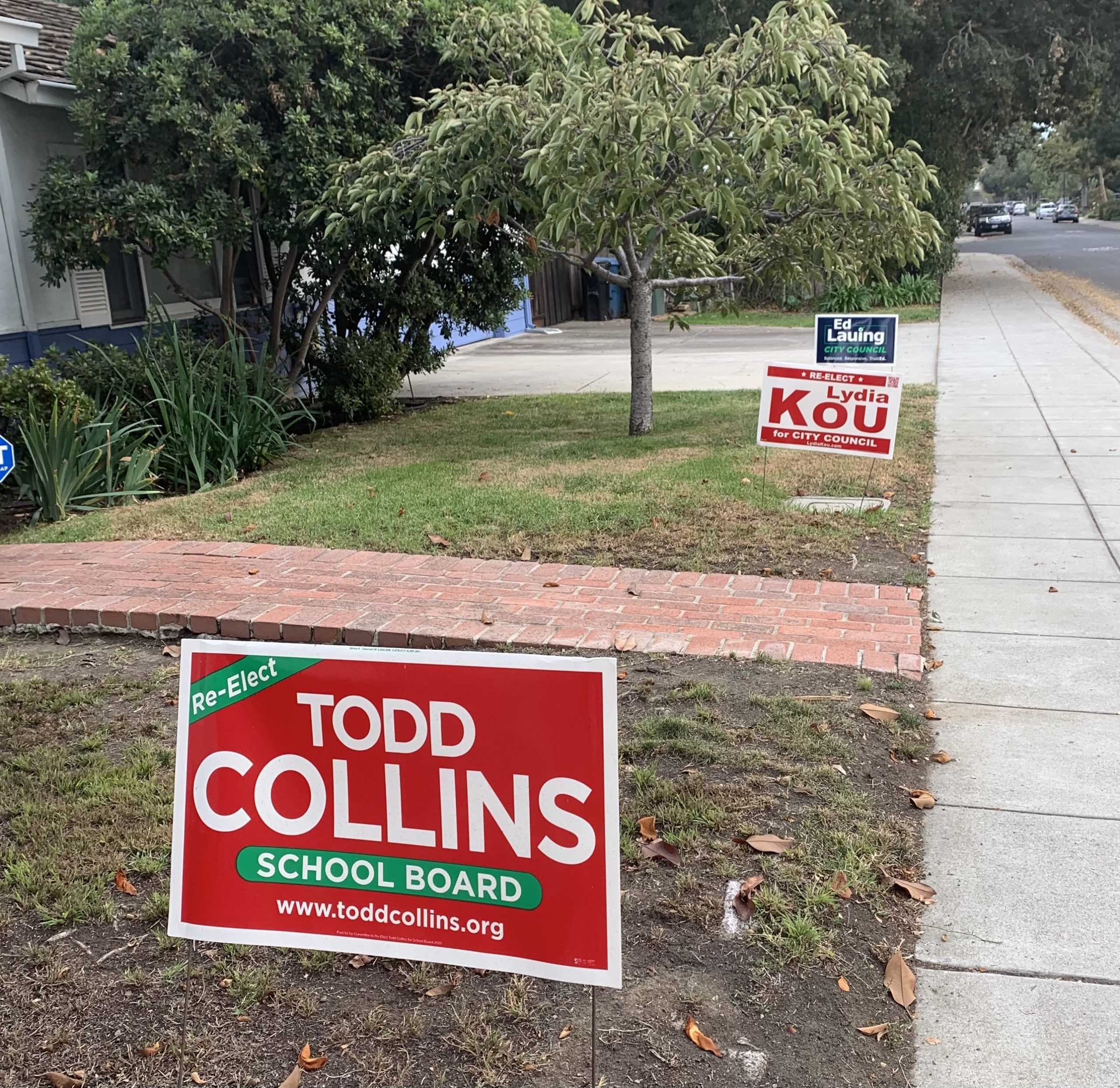 COMMUNITY SUPPORT — Lawn signs of local election candidates decorate the yards of Palo Alto neighborhoods as Nov. 3 draws near. Due to COVID-19 concerns, older poll workers are participating in lower numbers than usual, leaving younger citizens like Paly students to fill the shortage. “If you really care about the process of choosing elect, it's important to contribute however you can," junior Braden Leung said. "Voting is just really important in upholding our democracy and giving everyone a voice.” Photo: Paisley Annes

Due to COVID-19 risks, older poll workers are participating in lower numbers than usual, but Palo Alto High School students are stepping up to help fill the shortage.

Paly students such as junior John Bard have turned to social media as a platform to inform their peers of the opportunity to be a poll worker and bring attention to the current shortage.

“I knew a lot of people knew it was an issue, but I don’t think they realized that they could help directly,” Bard said.

The COVID-19 national case numbers continue to grow, showing no signs of stopping before the November elections.

Older people are at higher risk of COVID-19 complications. They are also the demographic that historically makes up the majority of workers at polling places. The U.S. Election Administration and Voting Survey found that “more than two-thirds [of election workers] were 61 years or older.”

“It [poll working] is not hard at all. I can’t vote yet, so I might as well help people who can.”

As a result, many older, experienced poll workers are choosing to stay home this November. Their absence has created an unprecedented demand.

Paly junior Braden Leung is working at a nearby voting center in November to help fill this demand.

“It [poll working] is not hard at all,” Leung said. “I can’t vote yet, so I might as well help people who can.”

Additionally, Bard urged his extended family members in other areas of the United States to sign up.

“It’s just a good way to help out — especially in areas with a lot of low-income people, it helps to have more workers so there are shorter lines,” Bard said. “Then they don’t have to take as much time off work.”

While being a poll worker serves the community, the opportunity also brings benefits to the worker.

“I think it will be a fun learning experience,” Leung said. “I’ll probably also get paid a lot or a lot of service hours too.”

According to the California Secretary of State, students can choose between receiving service hours or a stipend that generally ranges between $65 and $150, depending on the county.

Board passes plan to reopen schools