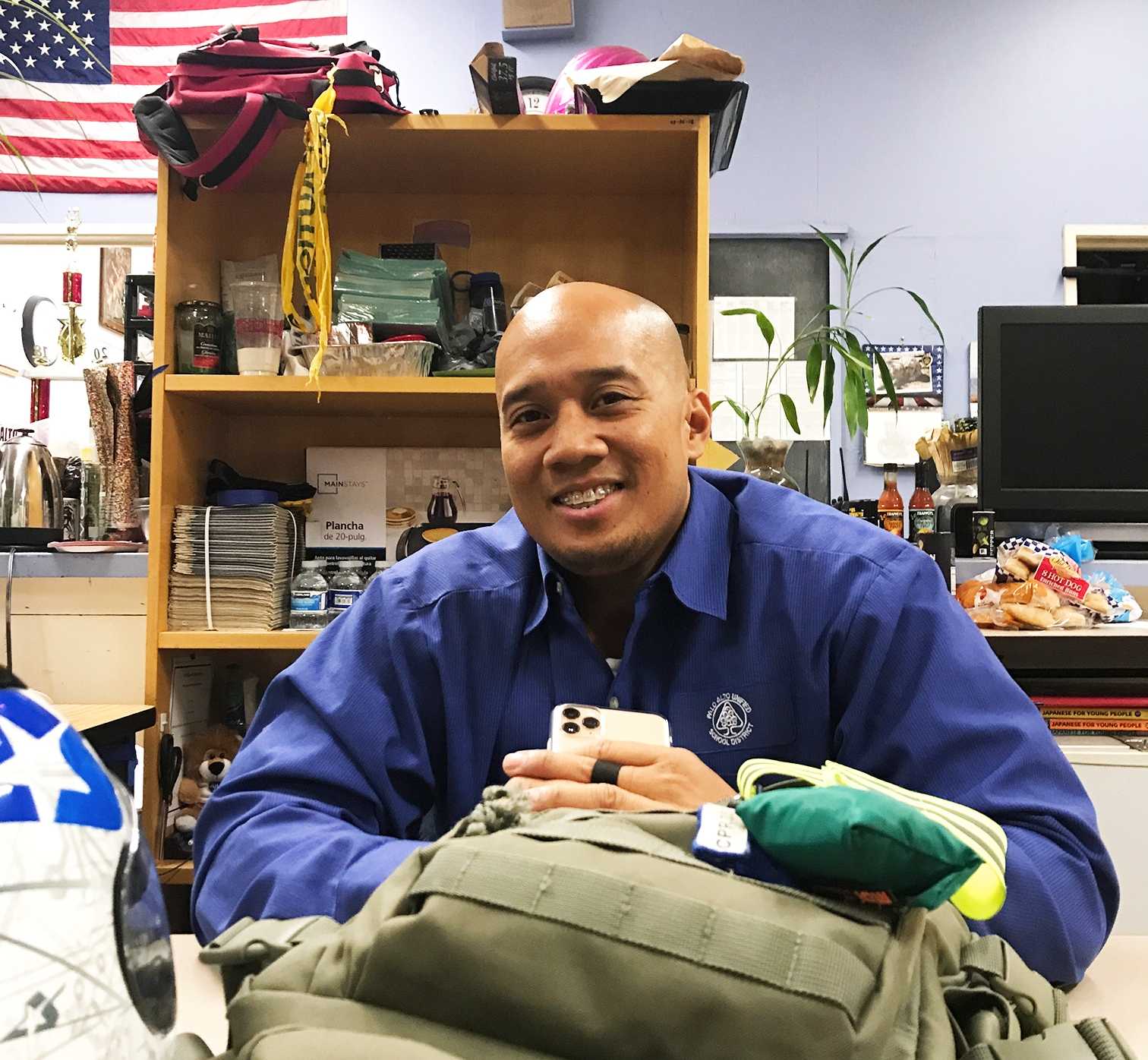 THE NIGHT SHIFT Custodian Albert Hidalgo is part of the staff that works on campus at night. Photo by Grace Lindstrom

Paly after dark: What happens on campus once the sun sets?

By 4 p.m., the Palo Alto High School campus seems largely deserted. It is mid-November, meaning that the temperature has dropped below 60 degrees — scarf weather in Palo Alto. Most students are leaving the school, or have already left. But for some, the day is just beginning.

Paly custodians begin their first shift after school ends. Albert Hidalgo has been on the team for three years and has been instrumental to the campus’s behind-the-scenes work.

“On a typical evening, we do anything from setting up functions, or meetings … or helping the staff where we can because we’re that extra hand,” Hidalgo says.

The second round of DreamCatchers, a middle school tutoring program, begins at 6 p.m. The program works to help close the achievement gap. During each session, a middle school student is paired with a high school or Stanford University student. Together, the pair work on developing good study habits for high school and eventually college.

“It’s having a tremendous impact on our students already,” Program Manager Pedro Rivas says. “For example, we have a former student who is now a Stanford student and is a tutor here.”

The effects of DreamCatchers are also felt by the tutors, who often form close bonds with their students. Paly Senior Katherine Buecheler spent part of her summer working with a fellow math enthusiast, ultimately helping him overcome intimidation over joining the advanced math lane.

“I think a big part of DreamCatchers is that it goes beyond just tutoring someone. You’re kind of like a mentor to them.”

English Through Movies, a Palo Alto Adult School class, ends at 8 p.m. Other offerings include Computer Skills, Home & Environment and Upholstery. In the class, the students watch films designed to introduce them to American culture, such as “Seabiscuit” and “Mr. Holland’s Opus.”

“It doesn’t feel like a classroom.” ETM teacher Mitra Bahrami says. “It’s more like a kind of a discussion.”

Her students compare what they see in the films to their own lives outside the U.S., creating a melting pot for cultural exploration.

The Palo Alto Adult School, established in 1921 has an annual population of approximately 8,000 and has over 50 instructors, some of whom double as Paly teachers during the day.

According to Bahrami, different classes attract different individuals. From foreign students looking to get another degree, to adults looking to expand their skills and knowledge, the school offers a community for anyone.

Along with regularly planned activities, unscheduled visitors can also be seen on campus once the sun has set.

With nearby stores closing around nine, locals will cut through campus to pick up last-minute snacks and needs from Town and Country Village.

“We get everyone from transients to locals just walking past getting to Trader Joe’s picking up their ice cream or eggs and then heading back down through Paly to their house,” Hidalgo says.

The latest Night School class, Taiko, ends at 10 p.m. Taiko is the art of Japanese drumming where students develop musical creativity, self-expression and the stamina to hit drums for two hours.

While some night classes come to an end at 9 p.m., other classes and groups continue on until 10 p.m. In Paly’s own band room, the Master Sinfonia Chamber Orchestra rehearses classics from composers such as Mozart and Beethoven.

Though people experiencing homelessness may not have an  impact on the average Paly student, night security will sometimes find them in unexpected locations.

“We found transients on top of the roof,” Hidalgo says. “He [Night Security] does his checks and every now and then he will find a transient just huddled up in the corner, making hotel right there.”

Travis Fenech opens the Student Center at 7:15 a.m. for students  who arrive early.

The center provides students with pastries from Mayfield Bakery and a warm place to wait out the rest of the morning.

Keepers of the campus: The untold stories of unsung heroes

The evening shift: The untold stories of adult school