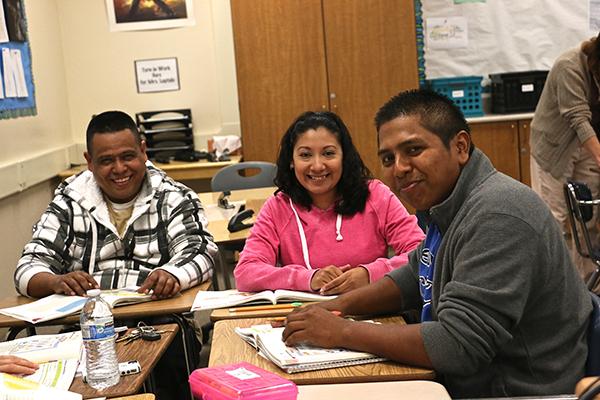 The Evening Shift: The untold stories of adult school

Palo Alto Adult School students Leonel Carranza, Elvia Pérez and Jose Diaz sit together in preparation for the start of their ESL class.

When night sweeps over the Palo Alto High School, orange-tinged lights in the breezeways illuminate figures with backpacks, much like the school’s inhabitants during the day. However, these students come to Paly after a long day of work to learn English. Adults call out to their friends and sit at the picnic benches near the quad as they wait for classroom doors to open. Palo Alto Adult School has taken over.

The 200s English building might house fluent English speakers during the day, but at night, non-native speakers sit in desks for their English as a Second Language classes. California financially supports seven ESL classes: pre-literacy through advanced low classes that students can attend for free. If students test out of the Advanced Low class, they can take English enrichment classes at PAAS for an average of $7 an hour.

While the class officially begins at 6:30 p.m., students continue to trickle into the classroom for the next half hour. Tardiness does not appear to be a significant issue. In this ESL Intermediate Low level class, teacher Charlotte Palmer reminds the students to spit out their gum and put away their smartphones, just like the high school teachers here during the day.

“It is difficult to keep a group of 30 adults … stimulated and motivated for three hours at the end of a long work day,” says Palmer, who has taught at PAAS since 1983.

Workbook in hand, student Julio Aguirre, 43, slides into a desk where he can get a clear view of the whiteboard. His friend sits down in the desk behind him and offers Aguirre a handful of multicolored candies, which he accepts.

In six months, Aguirre has easily integrated himself into the ESL program at PAAS. Originally from Mexico, he spends his days working as a chef in a French and Italian restaurant in downtown Mountain View. Both his day job and his night classes bring him closer to reaching his goal, to receive his chef’s certification and open a restaurant of his own in the next five years.

To Aguirre’s left sits Natalia Tesova, 37, a PAAS student since August. Four years ago, Tesova and her family moved from Russia to New York City after her husband found a job opportunity in the U.S. While in New York, Tesova enrolled in her first beginner ESL class. When she moved to California last year, her desire to improve her English carried over as well.

“I want to learn English because I am uncomfortable when talking with people,” Tesova says. “I would like to speak English easily.”

“Skin Cream Gives Better Heart Flow,” reads one of the suspicious advertisements that students in the Advanced Low class, the highest level free ESL class, evaluate in groups. This exercise enables students to avoid potential scams in advertisements they might encounter on a daily basis.

At the back of the room, four students discuss a web advertisement for land on the moon on sale for $29.99. One of them, Sol Morales, 32, excitedly brings her iPad up to the document camera in the front of the classroom, so others can look at the example of false advertising.

Morales, who moved from Mexico last year, appreciates the diversity of cultures in the class: 23 students representing 14 nationalities. Morales feels comfortable practicing her English here because she knows that everyone else might feel just as uncomfortable as she does.

“You can come practice your English, and [people] don’t hesitate to make mistakes,” Morales says.

Across the room, Oleg Solop, 34, studies the advertisements with his group. Solop moved from Russia only a year ago, but he takes ESL in hopes of eventually earning his green card for permanent residence.

“Here, it is more stable — in jobs, in life,” says Solop, who works in informational technology. “I think each day my English improves. It will help me with my job and help me understand.”

“I want to learn how to write my resumé, do interviews, get a job,” says Valentina Longhino, 33. “Here, you can make more connections easily — there are more possibilities.”

Longhino moved from Argentina two years ago when her husband came to get his Ph.D. at Stanford. She received her master’s degree in fine arts from a Buenos Aires university and now makes her living by creating acrylic and oil paintings. As she searches for opportunities to further her art career, she currently teaches Spanish and art at Learnika, a Palo Alto business that provides Spanish immersion and tutoring enrichment opportunities for students. According to Longhino, selling paintings in the Bay Area is easier than in Argentina because people here have the financial means to purchase them.

“It’s more difficult in Argentina for painters,” Longhino says. “It’s hard to find people there who are willing to spend money

In the English Learners Ladder to Success Transitions class, students improve their interview skills, perfect their resumés, practice using computers and learn to communicate in a professional setting.

“After taking this class, they’re more accustomed in understanding American workplace customs,” teacher Elizabeth Bales-Stutes says. “There are small things, like understanding appropriate work attire … a lot of what I do is teaching cultural knowledge.”

One of the other students in the class, Natalia Solis, 26, moved from Chile a year and a half ago. She started PAAS in March 2013, shortly after moving to the U.S. Solis initially enrolled in several intermediate ESL classes and then joined the ELLS Transitions class.

Solis quit her part-time job at Learnika recently, having previously tutored Spanish and math. She aspires to get a job involving her major, biotechnology engineering.

“I want to do some clinical research,” says Solis. “But in Chile, the science field is pretty small.”

Through the ELLS Transitions class, students like Solis and Longhino are learning to expand their personal networks. Not only will they communicate better with people they meet, but they will utilize their networks to further their professional opportunities.

“You need connections all the time,” Longhino says. “When there is someone important, you need to know how to talk to them.”

Three hours later, the students place their workbooks inside their bags before walking out under the still dimly glowing orange lights. As they make their way to the parking lot, night finally consumes the campus, silencing it until the morning when students arrive yet again.