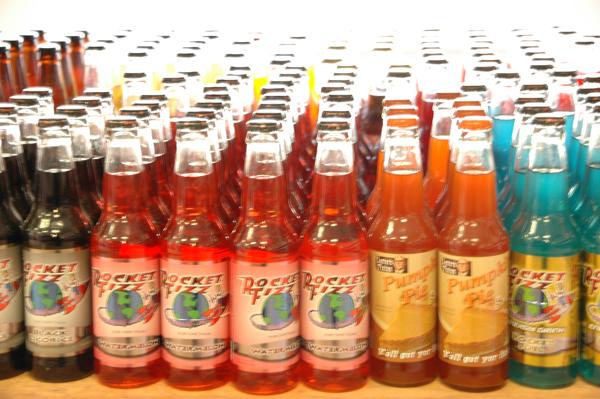 Bacon Soda. They actually created bacon flavored soda. My hand descends and grabs a bottle. I smile with relief, glad that to finally choose something to purchase.
I was wandering around Palo Alto Rocket Fizz Soda Pop and Candy Shop, which opened on University Ave. a week before Christmas, for a good 30 minutes — not because I wasn’t able to make a good decision but because I found the sheer diversity at Rocket Fizz overwhelming.
Retro Livin’

The first thing visible upon walking in the store is retro candy, stocked with  popular candy from the 40s to 60s, like the Charleston Chew, a chocolate-covered nougat bar, or the Abba-zaba, a chewy taffy.
“Basically our motto is, if you’ve had a childhood from the last 60 years, we got something for you,” Chris Dunn, owner of the Palo Alto and Campbell Rocket Fizz shops says.
As a modern day teenager, I can’t say that I used to eat these candies, but I do imagine that many adults would be happy to see their old favorites.

Time Machine
Along with the retro smorgasbord, Rocket Fizz proves itself as a retro-themed candy shop with walls plastered with tin replicas of 50s art.
“It [tin replicas] was put up to make people laugh,” store manager Ophny Escalant says. “It reminds people from the 50s.”
These signs, perfect for comic relief say things like, “Wine! How classy people get wasted” and “It’s better to have loved and lost that to live with the psycho the rest of your life.”
According to Escalant, Rocket Fizz plays music from the 50s to the 80s with occasional 90s music in the afternoons, just to keep in touch with modern times.
What I expected from Rocket Fizz was a candy shop. What I got out of it was a cleverly disguised time machine. Sweet.

Asian Candy
Thanks to Rocket Fizz, Asian candy can be easily accessible in Palo Alto instead of the distant land of Mountain View, which is the closest place with an Asian store. Try the hodgepodge of Asian candy that Rocket Fizz amassed. You and your taste buds can thank me later.
One of the rarities found in Rocket Fizz is Ramune, a Japanese soda brand that has a marble installed in the bottle neck  to keep the soda inside from foaming over when opened. Another treat in this section is the Big White Rabbit, a delicious taffy-like candy. It comes in small tootsie roll sizes, easy to unwrap and pop in your mouth.

Salt Water Taffy
If there’s anything in Rocket Fizz that  shows it isn’tthe lost land of Willy Wonka’s candy factory it’s the absence of a chocolate waterfall. Tragic really, but Rocket Fizz eases the calamity by replacing it with bins filled with salt water taffy. This section contains the store’s best deals:  $5.99 for small plastic bags (or $8.99 for big bags) that can be packed full of taffy and other small candies. 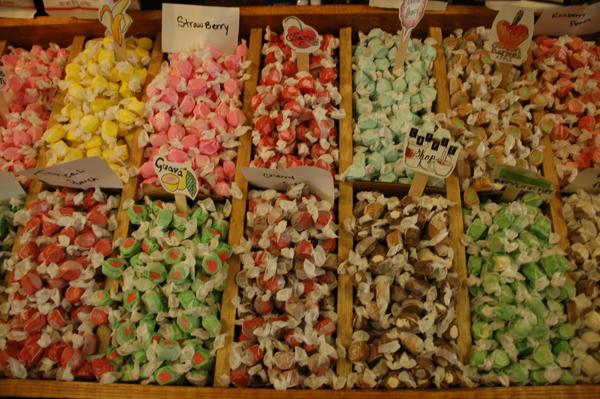 Sodas
Rocket Fizz carries sodas unavailable elsewhere, such as regional sodas like the Big Red from Texas or the Cheer Wine from North Carolina. It also carries 60 different flavors of soda bottled exclusively by Rocket Fizz itself, like the bacon flavored or Buffalo Wings soda.
Each soda sells for $2.19, with the exception of the occasional seasonal soda. There’s traditional sodas, like the classic Coca-Cola in a glass bottle, as well as unusual ones like the blue-colored cream soda and even a buffalo chicken wing flavored soda.

The British are Coming!
According to Escalant, the British chocolates are some of the more popular candies among teenagers. Truthfully, this section would be more accurately labeled the European chocolate section since Rocket Fizz does carry German Kinder chocolates.
Regardless, it is an impressive collection.
“That collection of British chocolate there is probably the most extensive in the Bay Area,” Escalant says, pointing to the tall British knight in armor, who guards loads of chocolate.

The Deciding Moment
The cap pops off the bacon soda bottle with a hiss. I am about to try my first taste of bacon soda. I think back to the suggestions I heard from others who tried the bacon soda.
“It tastes like feet after walking through the quad,” Palo Alto High School junior Gabe Salmon says, adding, “I’m glad I tried it though.”
It tasted fine to me —  sweet, like iced tea — but the smell of bacon killed the flavor in my mouth.
“Yeah, you know it’s funny, our most popular soda that we sell here is the bacon flavored soda,” Escalant says. “Some people like it. I think part of it is the curiosity and the novelty factor that people come in for.”
Truthfully, all of Rocket Fizz — sodas, candy and even atmosphere — offers novel brilliance to Palo Alto. Love it or leave it, it’s a decision for the curious and courageous.