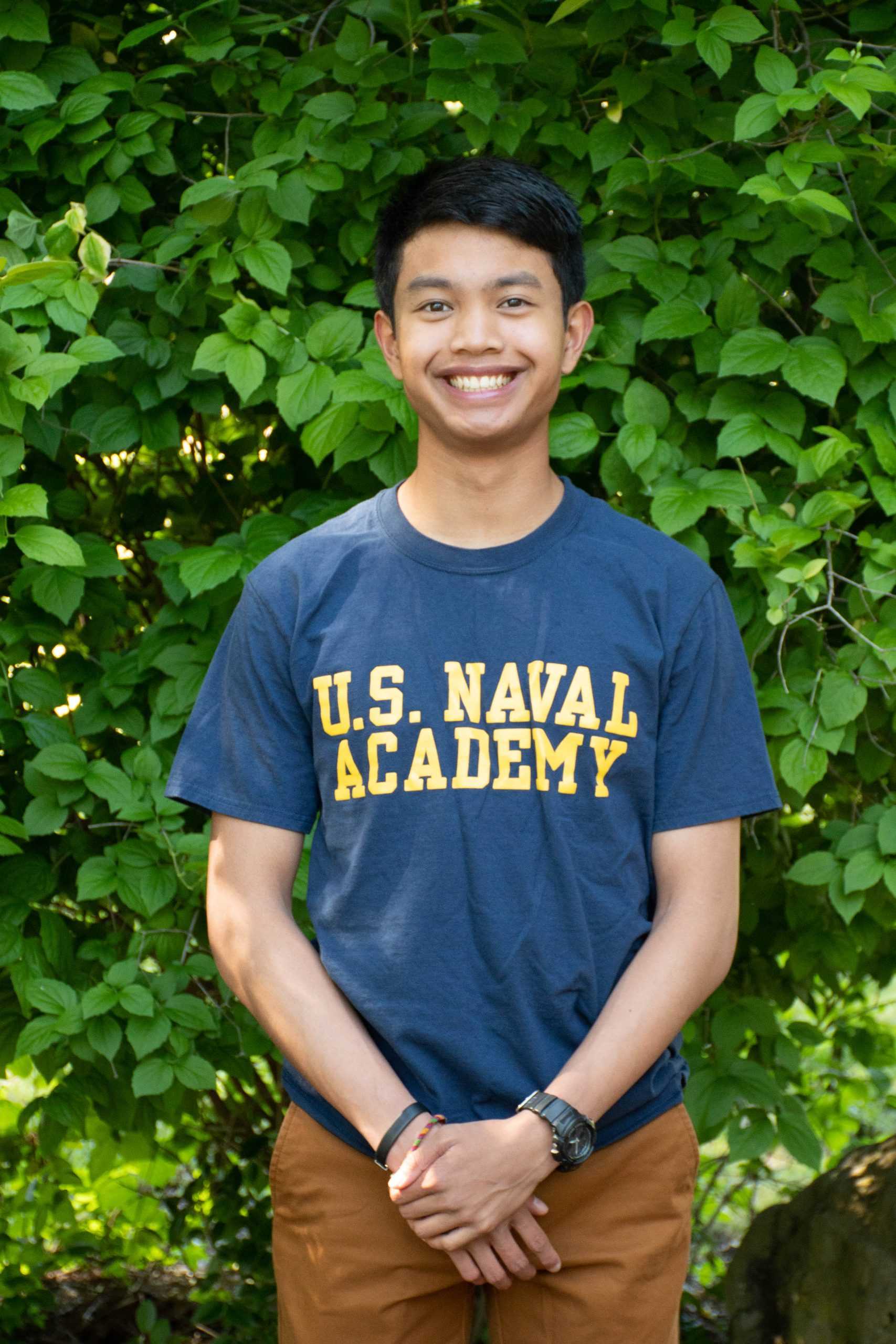 ACADEMY BOUND — U.S. Naval Academy recruit and Paly senior Andrew Bernas smiles while wearing his academy t-shirt. After undergoing the difficult and lengthy application, Bernas says that his favorite part of the process was receiving the acceptance call from Congresswoman Anna Eshoo. “That was definitely the most rewarding [part of the experience] and it was quite emotional,” Bernas says. Photo: Emma Wu

Navigating to the navy: Two students’ paths to military school

As the last bell of the school day rang, Palo Alto High School senior Andrew Bernas anxiously checked his phone, noticing he had multiple missed calls from an unidentified number. When this mysterious caller rang him again, he picked up, unsure of who to expect on the other end of the line. To his surprise, the voice that greeted him belonged to none other than California Congresswoman Anna Eshoo. Bernas was thrilled, knowing that there could only be one reason for this call: his acceptance to the United States Naval Academy.

Although most high school students work towards the traditional college experience, Bernas is one of few who have chosen a different path: entering the armed forces. Going into the military is an alternative for students looking for a unique post-high school plan, but potential recruits like Bernas face many challenges unique to the extensive military application process.

The stakes were high for Bernas to receive Congresswoman Eshoo’s endorsement; military academies in the United States require students to earn a recommendation from either a member of Congress or the vice president of the U.S. to apply.

Applying to military school also requires a certain amount of foresight. Along with the required high-profile recommendation, applicants must pass an intensive physical test, attend summer programs, pass a medical exam and conduct a lengthy interview with their selection panel.

“It’s definitely going to help me develop in terms of my character and discipline. They develop you as a leader.”

“It’s a pretty competitive process,” Ha says. “During the interviews, there were around five people asking me questions and examining my record. It was really tough.”

Aspiring military academy students must also pass a strenuous physical fitness test to be considered for admission. The test is divided into six segments — a basketball throw, a shuttle run, a mile run, sit-ups, push-ups and pull-ups. According to Bernas and Ha, this was the most challenging part of the application process.

“It’s definitely not fun, but anyone’s capable of doing it if they’re willing to prepare for it,” Ha says.

Though the military pathway was not originally in the cards for Ha, he was inspired to explore other options after watching a family friend graduate from the U.S. Naval Academy.

“Conforming to this [Silicon Valley] culture, attending cookie-cutter schools and wading in a tech start-up never appealed to me,” Ha says. “I spent a lot of time searching for a career that I’d be proud of and that I would want to work hard in, and I think the military really resonated with me.”

Benefits of the pathway

Along with the opportunity to serve the country in the armed forces, military academies provide many benefits that traditional colleges do not.

“For [the] Naval Academy, it is free tuition, and they pay for things like your board, your uniforms, food … literally everything,” Bernas says.

Bernas recommends that interested students do plenty of research about what studying at the service academy entails, especially its rigid structure.

“You have to realize … you’re gonna have to be really disciplined in terms of your time management,” Bernas says. “You have to decide if you can really live in that very structured kind of school, because [at] most colleges, you have so much freedom.”

“I spent a lot of time searching for a career that I’d be proud of … the military really resonated with me.”

Ha hopes that future Paly graduates consider the Naval Academy as a potential pathway and educate themselves about its many benefits. However, Ha advises prospective students to also be cognizant of all that the military school and mandated service entails.

Initially, Bernas was inspired to apply to military school because of the many career options available after the program.

Bernas recalled that when he was in seventh grade, he had the opportunity to visit Cape Canaveral  — a site where United States rockets are launched. The highlight of his visit was meeting astronaut Wendy B. Lawrence, an alumnus from the United States Naval Academy.

“I got really interested in a lot of the astronauts and reading about their stories and how …  many of them started in the military,” Bernas says. “That was really inspiring. I always thought of them [astronauts] as my role models.”

Andrew Bernas describes his visit to Cape Canaveral and how it influenced his decision to apply to the U. S. Naval Academy.

Bernas says his first choice for his five years of mandatory service is to be a part of Explosive Ordnance Disposal. According to the U.S. Navy website, this specialization involves the disposal of chemical, biological and nuclear weaponry.

Ha is considering several different options. The military pathway provides opportunities for acquiring various roles such as a military officer, a Navy SEAL, a pilot or a member of the Marine Corps.

“I’ve been looking into becoming a pilot in the Navy, but that’s not official, obviously,” Ha says. “I’ll either become a pilot, or I’ll be working as a surface warfare officer, which is directing aircraft carriers and other destroyers.”

Bernas also hopes that the program will help him to grow as a person.

“I did more and more research about the school and realized it’s going to definitely help me develop a lot in terms of my character and discipline,” Bernas says. “They develop you as a leader.”

Ultimately, although choosing the military pathway is an unconventional and time-intensive post-graduation plan, Ha believes it will provide a community and experience that will help him strengthen his character by serving others. In his admissions essay for the Naval Academy, Ha recounted an experience he had during his Naval Academy Candidate visit that emphasized the role of community in military service.

“Tragically, on the day I attended, a member of the brigade passed away,” Ha wrote. “The brigade supported one another. Through this tragedy, I witnessed the bond and respect that each midshipman forged with each other. Being part of the academy is to join a family united to serve people.”