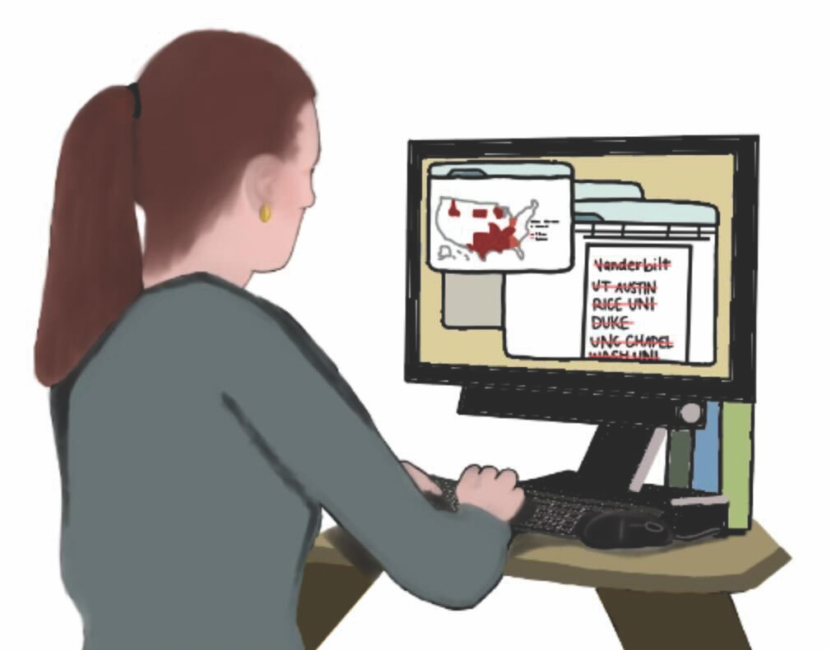 Sunny or snowy? Urban or rural? Close to home or the further the better? These are all factors students have traditionally considered when applying for colleges. But in the wake of the U.S. Supreme Court’s 6-3 decision to overturn the landmark Roe v. Wade decision on June 24, students are also grappling with its implications on their college experience.

Following the ruling, states are now allowed to determine their own restrictions regarding the right to an abortion. As of September, 12 states, almost all Republican-controlled, have completely banned abortions and an additional nine have attempted to ban abortion, but had the request blocked by courts. Some states where abortion remains legal have implemented strict bans on abortions during the early stages of pregnancy.

The ruling has garnered polarizing responses, and the right to an abortion remains vulnerable across the country. Meanwhile, students are heading off to college.

In California, a state where the pro-choice movement holds an overwhelming majority according to the Public Policy Institute of California, students have their right to an abortion protected. Many, like Palo Alto High School senior and Palo Alto Unified School District Board Representative for the Associated Student Body Johannah Seah, are concerned about moving for college to a state where this is not the case.

“I think it [the overturning of Roe v. Wade] just made me kind of scared,” Seah said. “I’ve already understood that the world is not a place that’s welcoming for me, but it’s definitely not easy to have to reckon with the future where I always have the possibility of being assaulted, and then having no right to decide what to do after that.”

“I always have the possibility of being assaulted, and then having no right to decide after that.”

Seah said she intentionally will not be applying to college in states where abortion is, or potentially will be, restricted.

“I’ve always been wary,” Seah said. “Obviously California isn’t the perfect utopia, but it’s definitely better than any other state where abortion is banned.”

Even for seniors such as Felix Blanch, for whom abortion access may not be a top concern, many are still concerned about the precedent set by the ruling and say they will not be attending college in states restricting abortion rights.

“I wasn’t going to apply to all those [colleges] in those states, just because conservative states already had a lot of laws that I disagreed with,” Blanch said. “So in that way, it [the new legislation] didn’t affect much, but it really did reaffirm my choice not to do that.”

Others, such as senior Kylie Tzeng, are still willing to apply in states that have restricted abortion, and believe that there are more important considerations when choosing colleges.

The question remains whether application rates to schools in states where abortion is banned or restricted will see changes, particularly at more selective institutions. Cathren Cohen, a legal scholar at the UCLA Center on Reproductive Health, Law and Policy, said a large portion of students will likely factor the new restrictions into their college planning.

“There’s already a pretty high rate of unplanned pregnancy among college students relative to other populations, and so I think it’s definitely something that folks are going to be thinking about when they choose their schools,” Cohen said.

The impact of the decision is greater for some. Higher income students may be able to afford to travel to a state where abortion is accessible, but this is not an option for all.

“The impact of this decision are folks who are low-income, people who are immigrants, especially undocumented immigrants who really can’t travel freely often and just people who don’t have the resources to go to another state to get abortion care,” Cohen said.

In many Republican states where many low income students have less reproductive freedom, many legislatures moved to severely restrict or ban access to abortion since the Roe decision, while other states have passed legislation to ensure that the right to abortion is protected, according to The New York Times. In January, a California law will go into effect requiring all UCs and CSUs to provide abortion pills at their student health centers.

According to research published in the Journal of Adolescent Health, an estimated 322 to 519 CSU and UC students seek medication abortions each month. About 62% of California’s public college students were over 30 minutes away from the nearest abortion facility.

“Students aren’t going to have to rely on cars,” Cohen said. “They often don’t have public transit, which could be inconsistent. [Instead] they can just go on campus, … where they get all of their other health care. I think that’s really powerful in getting rid of that stigma over what is a pretty common medical procedure.”

“I definitely expect in particular people who can get pregnant to be thinking about this.”

Although abortion rights in California remain protected for the foreseeable future, some students say they are concerned about future Supreme Court rulings. In his concurring opinion to overturn Roe vs. Wade, Justice Clarence Thomas directly challenged the validity of the Griswold, Lawrence and Obergefell rulings, which legalized contraception, same sex activity and same-sex marriage, respectively. If these rulings were to be overturned, many students, according to Cohen, may consider these rights as they navigate their college applications.

“These kinds of attacks [on abortion and LGBTQ rights] often go hand-in-hand,” Cohen said. Ultimately, Cohen said she believes that the effect of the overturning of Roe will be widespread, not only for college students seeking abortions, but for a broad segment of the public seeking reproductive care.

“To see how quickly people have been denied, not just abortions, but all sorts of other reproductive health care [shows] the really large chilling effect on the medical profession in general,” Cohen said. “That’s what I’m thinking of.”