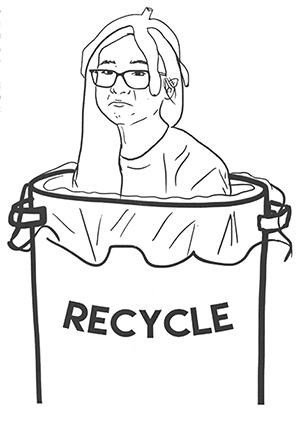 My Trash Talk: Apathy toward littering ruins the environment

In the midst of college applications and the chaos that is senior year, lunch is the only time I can relax by enjoying whatever delicious food I decide to buy from Town and Country. On one particularly gloomy day, the idea of seeking refuge in the Media Arts Center kept me going as I trekked from Town and Country on five hours of sleep. As I entered the MAC, expecting peace and quiet, I was hit by the obnoxious screams of rowdy underclassmen whose lunches lay smashed on the carpet, their potato chip bags strewn around the beanbags and colored cubes like tumbleweed.

I will admit, I’m not the most Earth-conscious person. Sometimes I accidentally throw recycling in the compost bin and compost in the recycling bin, but hey, at least I’m actually throwing my trash away. I have seen too many people mindlessly littering, entirely disregarding the effects their actions have on our community. From my observations and experiences, there seems to be a tragedy of commons in Palo Alto. A tragedy of commons is when people act selfishly and cause a depletion of a certain resource. People act in their own self-interest and don’t take the extra step to be conscious of the environmental issues in our precious world, causing an unhealthy Earth. As a community, we can’t let this attitude continue.

When the Media Arts Center opened during the 2014-2015 school year, I and many other students were excited to take advantage of the space. It was a privilege to not only eat in the multi-million dollar building during lunch, but also to use it as a space for my journalistic endeavors. Yet, the last time I passed through the MAC with food in my hands, various campus supervisors yelled at me to leave and eat elsewhere (though I believe students are now allowed to eat at the high tables). I can sympathize with the MAC staff in that scattered food scraps and trash is unacceptable. Not only do those students disrespect the building, the teachers and the custodians, but they do it with a sense of entitlement and a belief that someone else will clean up their messes.

Students’ refusal to pick up after themselves extends beyond the boundaries of the campus. I see a repeat of what is happening to the MAC at Town and Country restaurant eating areas. Every time — seriously, I mean every time — I go to Howie’s to enjoy a fat slice of pizza, I see students  leaving garbage from their lunches that their parents had probably packed for them. Really? The trash can is five feet away. Utilize it.

Before you think that this is a long rant only about littering, which may seem like an infinitesimal issue to you, littering is the start of people’s ignorance of the environment. Our Palo Alto High School tragedy of commons  is detrimental to the environment in. Littering could eventually degrade our city to the point that it will affect public health and require money to counteract. The sense of entitlement that people have is only the spark of complete disregard to Earth’s health. We need to eliminate this mentality. Littering threatens Earth’s vitality.

Together, there are few solutions we can take. The first is to pick up other people’s trash (which isn’t exactly nice for me or other tree-huggers);  the second is a push for littering fines in Palo Alto, and to have a campus supervisor, yell at litterers at Paly. The third solution is to create an overall feeling of obligation to be environmentally conscious by guilt-tripping people who aren’t.

I don’t expect people to change prolonged habits in a heartbeat, but I’m pleading them to try. Perhaps if we all contribute more to how we handle our outlook on the Earth, starting with the issue of littering, we can slowly build up the health of our environment and quality of our relationship. It is our duty as inhabitants on this Earth to respect it and preserve its natural state, so that next generation can experience nature’s beauty. So remember, next time you drop something on the ground and don’t pick it up, I  just might throw you in the trash.