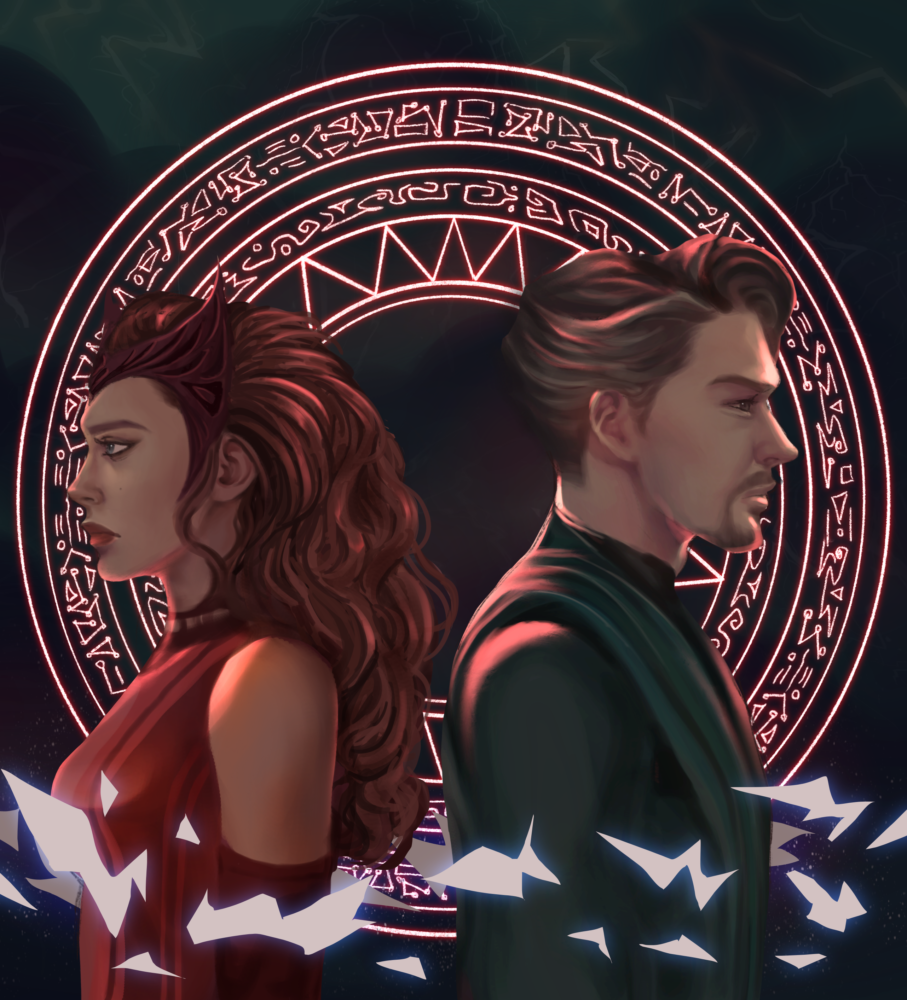 A blood-soaked Scarlet Witch limps barefoot across broken glass with a vengeful glint in her eye, leaving the remnants of a brutal massacre in her wake. She’s pursuing a horrified Doctor Strange and young America Chavez through a flickering, dimly-lit hallway.

This unsettling scene — more characteristic of a fright flick than of a superhero film — comes from the new Marvel movie “Doctor Strange in the Multiverse of Madness,” released in theaters on May 6. The two-hour-long movie boasted a budget of $200 million, according to Forbes, and follows the events of “WandaVision” and “Spiderman: No Way Home.” Doctor Strange (Benedict Cumberbatch) and Wanda, or the Scarlet Witch (Elizabeth Olsen), star alongside new character America Chavez (Xochitl Gomez). This blockbuster production may be just another Marvel money-maker, but it at least gives the superhero genre a fresh twist: horror.

America has the unique ability to travel freely through the multiverse, although she has yet to learn to control it. Scarlet Witch, grieving after being separated from her children who exist in the other universes, aims to take America’s power so that she can be with them.

America teams up with Doctor Strange as they travel through the rest of the multiverse evading and battling Scarlet Witch.

Palo Alto High School junior Kyle Lee said he has watched all the marvel movies released to date and read many of the comics and was excited about the prospect of Scarlet Witch and Doctor Strange facing off in a classic, superhero showdown.

“This is the bridge between Doctor Strange and Wanda … one of them is more like sorcerer magic and one’s more like witch magic,” Lee said. “Wanda is theorized to be more powerful, but Doctor Strange is supposed to be smarter.”

Director Sam Raimi has notable works in both the action and horror genre, directing the first three “Spider-Man” movies starring Tobey Maguire, as well as horror titles like “The Evil Dead” and “Army of Darkness.” Raimi’s experience with horror influenced “Multiverse of Madness,” Marvel’s first horror-infused film. Though rated PG-13, it branches out from the typical action-packed Marvel movie template many fans expect, using interesting film effects and depicting dark themes, including grief and corruption.

Some horror elements in the movie include disturbing face-morphing, brutal impaling, eerie music, jump scares and a zombified Doctor Strange that was more laughable than unsettling.

“I think it [the horror] contributed to the plot in the way that it completely changed Wanda’s character.”

Sisters senior Anisha Gandhi and freshman Divya Gandhi have been long-time Marvel fans and always watch the movies together, but they found the new horror elements in “Multiverse of Madness” not quite to their taste.

“I don’t really like horror movies much, so it was a little bit scary,” Divya Gandhi said. “But, I think it contributed to the plot in the way that it completely changed Wanda’s character from the Marvel productions we saw before, like in WandaVision.”

Despite their distaste for the horror influences, both sisters agreed the movie does a good job developing Scarlet Witch’s character.

“I just really liked to see the really different sides of her character,” Anisha Gandhi said. “It seemed like sometimes what she was doing was justified in her own mind, so I thought that was really interesting to see how dark and really violent she got.”

By exploring the dark and light sides of different characters, “Multiverse of Madness” was able to develop conflict without having a clear protagonist or antagonist, a unique way this movie breaks from the classic superhero genre. The movie follows Scarlet Witch’s story arc after the events of “WandaVision,” and follows her as she falls onto a darker, grief-lead path, highlighting Olsen’s captivating portrayal of her character.

“I thought it was really interesting to see how dark and violent she [Scarlet Witch] got.”

Another way that “Multiverse of Madness” stands out is through the use of intense zooming in and out filming techniques and slanting frames, which give the movie a supernatural and chaotic feel. However, not all of these experimental techniques worked as well as others. One scene where Doctor Strange fights an altered version of himself introduces the concept of using music as a form of combat. While interesting in theory and executed well auditorily, the brightly colored, flying musical notes that accompanied it felt cheesy and out of place.

Exploring the multiverse offers endless potential storylines and characters to be introduced into the Marvel Cinematic Universe, and whether or not fans enjoyed “Multiverse of Madness,” there is no denying that it challenges the look of the traditional superhero movie and broadens the realm of creative liberties that directors and producers take in making them.