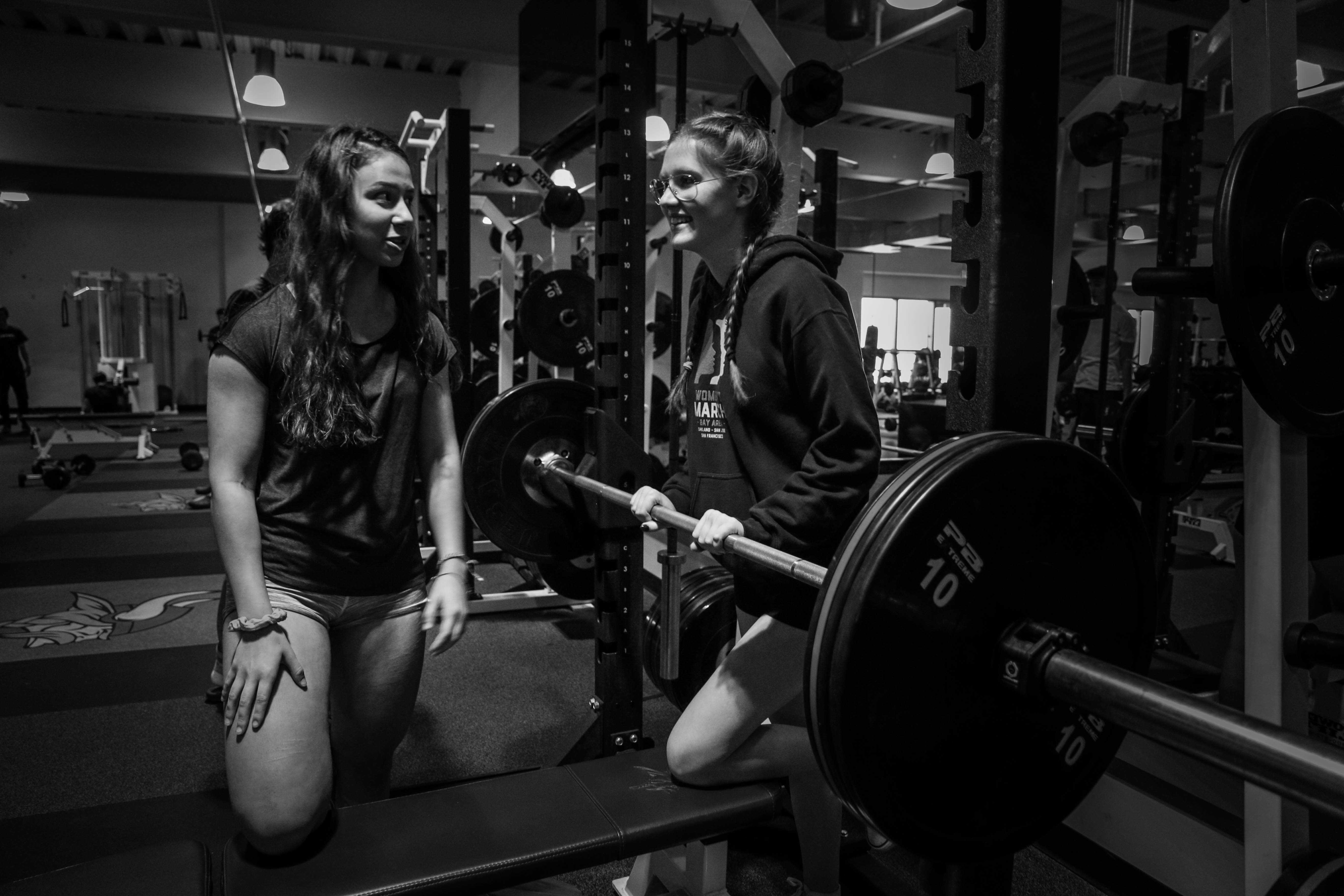 On one side of the room, freshmen Matt Corrigan and Jackson Bishop spot each other on the bench press. In the back, seniors Kiran Majeti and Hyunwoo Roh do an abdomen workout together. Sitting along the wall, juniors Megan Andrews and Lily Welsh chat.

The Peery Center at Palo Alto High School is now in full force, as every sport and student has now had the opportunity to use the facilities since it was first opened last year. It is not quiet in the weightroom. Inside, there’s a mixture of laughter, chatter, perspiration and focus.

Open since August 2017, the $36.4 million, 91,765-square-foot gym was created with the intent to “nurture the whole child and provide some balance in the fast-paced, work-obsessed environment we live in,” the Peery family said in an interview with Palo Alto Online. As seen by the atmosphere of the weight room, The Peery center has fulfulled this purpose.

Physical Education teacher and Paly alumnus Jason Fung remembers when the Paly weight room was just a small, smelly room in the old gym. The room was almost entirely populated by varsity athletes, most of them being football players, according to Fung.

Fung, as well as former athletic director and football coach Earl Hansen, was heavily involved in the design process, and designed it with everybody in mind. Unlike the past gym that was divided into two rooms, the new space is open, with tall ceilings and windows that cover the entire wall.

As a result, the weight room is home to a vibrant mix of students from all grades and fitness levels. Some students lift weights, do cardio or work on their core, while others talk with friends. The weight room has truly become a place for everybody.

Thud Callum Day Ham punches Dion Li as he does a pull up. Both are often in the weight room working out, but say that they can remember a time when they were intimidated to go. “It was a lot smaller and there were mostly seniors in the [weight] room … with a bigger gym you can do a lot more,” Li says.

Despite the Peery Center’s inviting atmosphere, students can feel intimidated just by the concept of a gym. Junior Ya’el Sarig remembers being daunted when she first started working out regularly.

As co-president of the Barbell Club, Sarig hopes to instill students with comfort and confidence in the weight room. Sarig uses her own experiences to help empathize with gym newcomers.

“When I was beginning [going to the gym] …  I always sort of felt like I had imposter syndrome, like I didn’t belong there because I was weak, and that I was taking up the equipment,” Sarig says.

Sarig says that as she started going to the gym consistently, focusing more on her workout and less on the judgment of others, it became easier and easier.

Junior Tina Lagerblad, who is co-president of Barbell Club alongside Sarig, started going to the gym her sophomore year when she joined the track team and more seriously when she met Sarig.

The Barbell Club serves to teach students how to use the machines in the gym, create a smaller community in the weight room and address the intimidation students may face when going to the gym, according to Sarig and Lagerblad.

“It can look very intimidating from the outside looking in, but we want to open a door for people to be able to come in that might want to,” Lagerblad says.

During the first tutorial of every week, members of the Barbell Club gather in the media room across from the weightroom. At this particular meeting, the group clusters near the board at the front of the room, where Lagerblad and Sarig teach the group how to squat. She brings out a lifting belt and straps it on, demonstrating how it is used as if she were in the weightroom. She passes it around and lets the group try it for themselves. As the meeting ends, Lagerblad and Sarig remind the club that next week they will be in weight room.

“For the first couple months of lifting … I would force someone else to come with me because I was just too scared to go alone,” Sarig says. “It [Barbell Club] is just trying to introduce people, who might feel the same way as I did, to a supportive community where you’re always gonna have someone next to you cheering you on.”

Lagerblad and Sarig have also noticed that guys will come up to them and ask how much longer they will be using the equipment. As Sarig recounts a time this happened to her, senior Walker Rosenthal interrupts, surprised that this happens.

“If you do see a woman in the weight room … know that it’s hard enough for her to be there already, … and just don’t single her out,” Sarig says. “Even if you are impressed with her, don’t be weird about it. We’re just people lifting like anyone else, don’t treat it like a huge anomaly.”

However this is not a problem specific to the Paly weight room. Sarig and Lagerblad notice that in most weight rooms men far outnumber women.

The lack of gender diversity is not the only deterrent for new students looking to work out in the gym.

Rosenthal, a wide receiver for the football team, is consistently at the gym and, like many, was intimidated to go to the weight room at first.

“When I just started working out I used to go during lunch because I didn’t want to be there in at the same time as all the seniors who played football,” Rosenthal says.

Despite this, Rosenthal, Lagerblad and Sarig have all found that this intimidation is unfounded.

“Some of the nicest people I’ve ever met at the gym had been the people who look the most intimidating,” Sarig says.