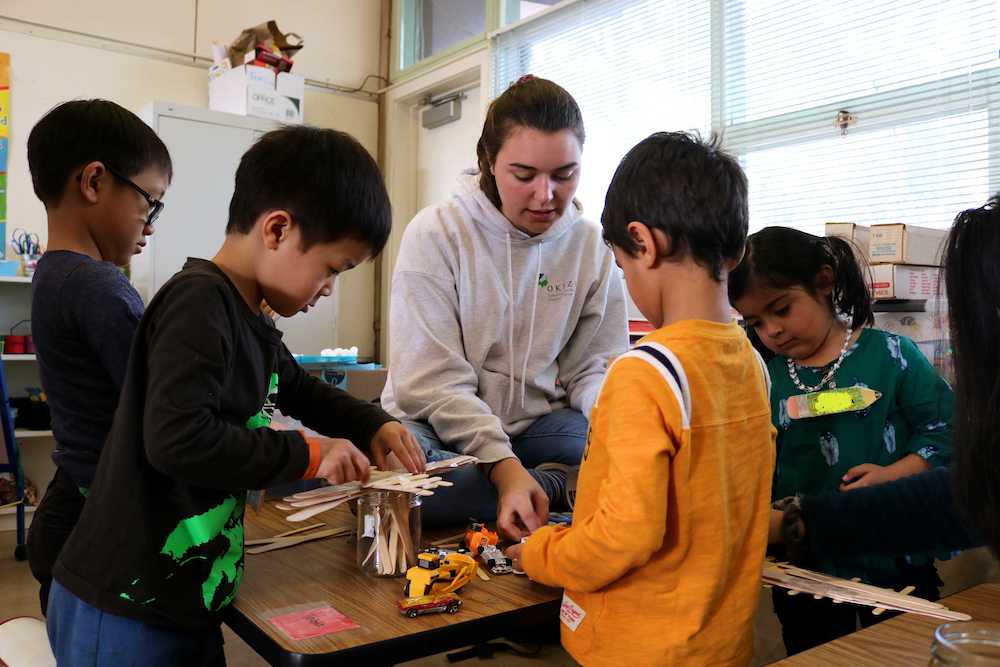 “You made this bridge? Wow, it looks like it could hold up me,” senior Luc Pardehpoosh says, working with one of the five-year-olds in the Greendell Preschool classroom. Littered with miniature desks and similarly miniature humans, the overcrowded room is alive with energy as students work with the high schoolers to build and test handmade popsicle stick bridges.

Founded and taught by Hillary McDaniel at Palo Alto High School, the Early Childhood Development class combines classroom learning with real-world experiences. California Gov. Gavin Newsom recently proposed spending up to $1.8 million on ECD programs across the state next year, and Paly’s program is a direct reflection of what could come from such a heavy focus on ECD.

PUT IT TO THE TEST Senior Anna Oft sits by as the preschoolers test their handmade bridges with the weight of toy cars. Video by Abby Cummings

The high school class catches a 10-minute bus ride to and from the preschool to instruct children in the Young Fives program. Under McDaniel’s guidance, students collaborate beforehand to make lesson plans and activities appropriate for five-year-olds.

While a room full of 18 energetic preschoolers may certainly look cute, a moment of silence is rare. As they settle down on the rainbow mat for storytime, the teens find themselves with multiple children piled in their laps. The children comfortably lean back into the students, fidgeting in place and reacting enthusiastically to the picture book about architecture.

This school year, a second level of ECD was added, which includes double credit as part of a dual enrollment program with Foothill College. McDaniel says she has seen her six returning students’ initiative develop while teaching the preschoolers.

“It’s pretty amazing that … they can just go in and lead an activity and that now they’re even starting to come up with their own ideas,” McDaniel says. “It’s become more natural for them to see a problem and know how to intervene and fix it without looking to me to do it.”

“As a senior now … it’s like the students are the teachers so I’ve been able to be more like the teacher than a playmate to the kids,” she says.

McDaniel says ECD is an especially important topic to learn about in school that will resonate with most high schoolers in later life.

“The vast majority of you [high schoolers] will become parents and/or be involved in the lives of children in some way or another,” McDaniel says. “I don’t know what could be more relevant than teaching about how children grow and change over time and how to best support and nurture them.”

The class provides future parents and educators opportunities to learn about the first five years of a child’s life which, according to Stanford professor Deborah Stipek, are some of the most critical.

“[In] those first five years [of cognitive development] we’re creating the architecture of the brain that serves as a basis for all future development,” Stipek says.

According to many, including senior Anna Oft, who is enrolled in ECD 2, the course material is not only applicable for future parents, but for people who will enter a multitude of career paths that involve kids.

“Because of the class [ECD] I definitely want to do something related to kids, no matter what that is,” Oft says. “I’ve always been interested in social sciences and now I’m thinking about studying specifically something to do with child development.”

This partnership benefits both Paly students and the preschoolers themselves, who have the opportunity to form strong, healthy bonds with older mentors.

When one girl is asked what her favorite thing about having her buddies come to teach them, she immediately becomes shy and responds with two simple words.

ECD 1 Dual Enrollment junior Lainey Germain says she thinks the kids benefit from the relationships they form with the teens.

“I guess we as teachers serve as mentors or role models for the kids,” she says.

These feelings are reciprocated by the high schoolers enrolled in ECD. While they say spending so much time at the preschool can be exhausting at times, seeing the kids’ faces light up as they walk in makes it all worth it.

“When I’m taking a test or reflecting on a lesson with the kids, I realize that I’ve learned so many theories and terms through seeing them play out in real life,” Oft says.

ECD 1 junior Brianna Miller says she has even formed a close connection with a student who is part of the Voluntary Transfer Program, like her.

“When he sees me at the bus stop he is always willing to say ‘Good morning, Brianna,’ which is definitely a highlight in the morning for me,” she says. “He also, I think, feels like he can trust me because we have something in common.”

Like many of her ECD classmates, Levine Sporer says the class has inspired her to major in early childhood development and teach primary school in the future.

“It’s [ECD] a great introduction to learn how to create your own lesson plans and how do the kids learn and how every kid’s different,” she says.

According to McDaniel, there are plans to expand the course. The PAUSD Preliminary School Site Plan 2018 Bond Measure draft details plans to build a new Career Tech Education and Science, Technology, Engineering and Mathematics center. McDaniel says she hopes the district will grant her space in this building to expand the ECD program to a childcare center.

Not only would the facility eliminate the need for transportation between Paly and Greendell, but McDaniel says it would also improve student behavior and happiness around campus.

“We might, as adolescents, treat each other differently if we knew that three-and four-year-olds were nearby and able to see and hear us,” McDaniel says. “What a community that would build.”