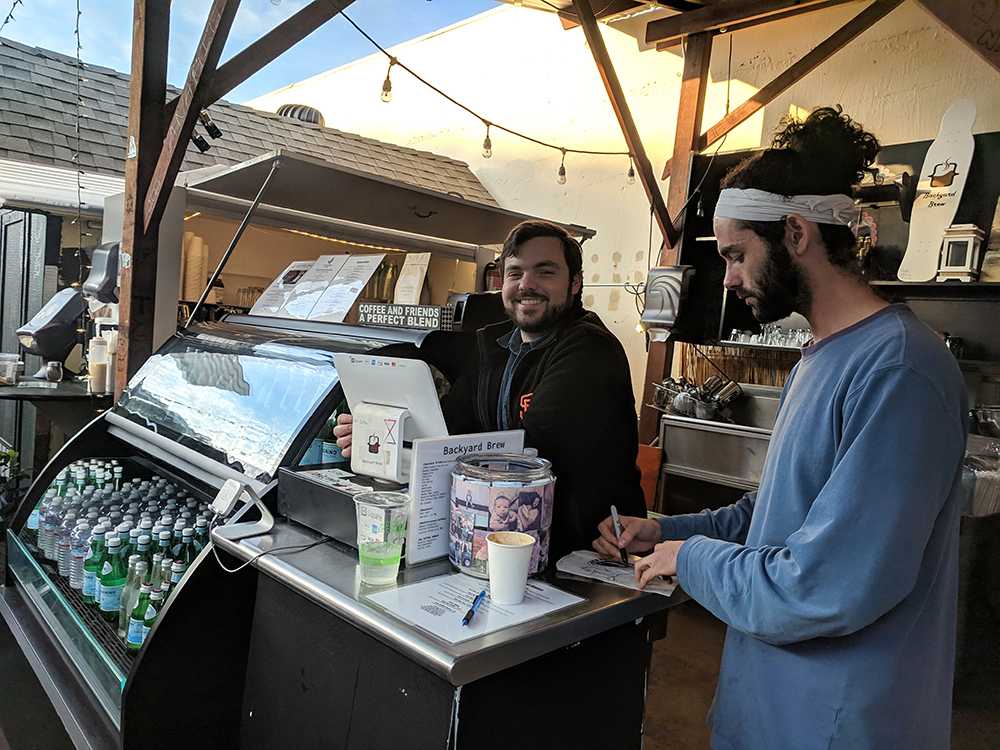 Located on California Avenue, two family businesses are strengthening familial and community ties through meticulous shoe repair at The Cobblery and handcrafted coffee at Backyard Brew. Though one has been in business for decades and the other was established just recently, the relationships they foster are similar. Run by fourth-generation owners and a young family, respectively, they add character to the street and broader community.

A floor-to-ceiling window display of hand-worked leather purses behind sparkling glass attracts the most tasteful of California Avenue shoppers. Brightly colored socks, shelves full of unique wooden clogs and the smell of leather polish greet the senses upon entering the shop.

Even as a technological wave hits Silicon Valley, the allure of The Cobblery, a long-standing family business founded in 1940 by Gabe Oller, has persisted.

A doorway behind the register offers a glimpse of Richard Corny and Stephen Oberhauser, two of the four owners of this family business, working on the latest repair order.

Their workspace houses racks of handheld tools; repaired boots and purses waiting to be picked up; machines that spin and send sparks flying and even a sleepy French bulldog named Ramses who rests under the counter.

“He’s the store mascot,” jokes Oberhauser, who wears a baseball cap and a friendly grin. 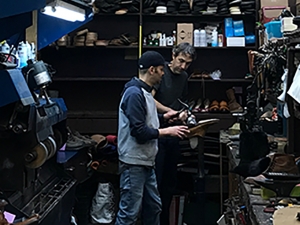 HARD AT WORK Stephen Oberhauser (left) and Richard Corny (right) hammer and paint two shoes. The workroom has a homey feel and it is clear the two cobblers know their way around quite well. “Being part of the business on California Avenue has made me part of the community,” says Roth. Photo by Kate Milne

As the machines hum, Jessica Roth, great-granddaughter of Oller, helps a customer at the cash register. Wearing eclectic jewelry, Roth’s style fits right in with the funky footwear displayed throughout the room.

As a Palo Altan teen, Roth was never interested in being part of the business. Once the store began to sell shoes and not just repair them, however, she became interested in working for her parents.

Much like their mother, Roth’s two children, junior Lilli Corny and senior Hanna Corny, have grown up in the store and spend a considerable amount of time in the current location at 410 California Ave. Lilli has many cherished memories from being in the store with her family; one of her favorites was when she was six and her mother asked her to help bring out shoes for a customer.

“I was nervous and excited and stressed out at the same time,” Lilli says. “Even though it’s such a simple task, I was worried maybe I would give the shoes to the wrong person. So I went back and my mom helped me bring them [the shoes] out.”

Although the business has always been run and owned by family members, Roth is a firm believer that her children should find their own paths in life and pursue their own passions.

“None of our kids are allowed to [take over],” Roth says. “I’m not ready to retire anytime soon … We’re really encouraging all of our children to find their own path. Not only because we are not sure how sustainable small business is, but it’s really important to us that our kids are doing something that they like.”

For Lilli, being a part of the family business has taught her fundamental skills, and one of her most valued aspects of being involved with the store is her “relationship with the community [and] getting to know new people.”

Walking down the painted alleyway into Backyard Brew off California Avenue, it’s clear this is not your generic Starbucks coffee shop. For one, the entire cafe is outdoors, with holiday lights glowing on mural-covered walls and crossing the open blue sky overhead. For another, what appears to be a simple cardboard box at first glance transforms into a 10-foot child’s fort — lovingly named “Adam’s House” after owner Ryan Khalil’s toddler son — fully equipped with peek-a-boo windows and a door handle made of a baby blue glove.

At Backyard Brew, there is no such thing as a traditional patron — only friends, says Ryan. Managed by Paly graduates and couple Ryan and Rania and staffed by their close friends, Backyard Brew strives to foster a welcoming environment where visitors can relax and residents can develop closer bonds.

Their community-oriented focus should come as little surprise given the long-standing ties their family has to this town; not only did Ryan and many of the staff grow up in Palo Alto and attend Paly, his cousin, Omar Khalil, is currently a junior at Paly.

“We’re not just in Palo Alto. We are part of it,” Ryan says. 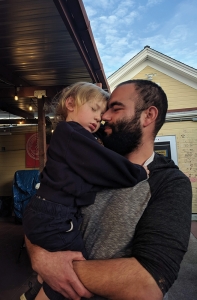 A LOVING HUG Two year old Adam Khalil (left) hugs his father, Ryan Khalil, in the open plaza of Backyard Brew as the day winds to a close. He hopes to encourage everyone to pursue what they are passionate about and attributes his want for others to succeed to those who have helped him in the past. “A lot of people in my life have gone out of their way to help me and I just want to return the favor,” Ryan says. Photo by Kayla Brand

This welcoming mentality creates an oasis of free-spirited energy and a community atmosphere that can’t be found in a chain business.

“Backyard Brew. This is your backyard too,” says Adil Ahsan (Class of 2009), who works at the cafe and graduated with Ryan.

The family attitude also carries over to the crossed-trained employees of Backyard Brew, whose wide range of talents and responsibilities are supported by their colleagues at the cafe.

“Every single person has their own dream and not everyone wants to be in a coffee shop,” Ryan says. “It [Backyard Brew] is to help you build the skills that you want to obtain over time for yourself.”

Although he now works at Trader Joe’s, Omar says he used to help with cleaning and building to prepare Backyard Brew for opening. After the cafe opened, he worked as a barista or cashier on the weekends.

“The environment is really positive and uplifting, just being there when I can is so amazing because it just gives off such a vibe that makes me feel so relaxed and happy,” Omar says.

However, with his taxing junior year workload and his new job at Town and Country, Omar hasn’t had time to work at the Backyard Brew.

Ryan says that if Omar must choose between staying at Backyard Brew and working hard at school, academics is the first priority.

“He [Omar] has a bubble of pure positive energy around him,” Ryan says.

Ryan not only appreciates Omar’s frequent visits, but also his new ideas and interests, ranging from the cafe to his schoolwork.

“I love curiosity and excitement,” Ryan says. “Omar is a very curious person … and a very smart one too.”

Omar, too, speaks highly of Ryan.

“He [Ryan] is a very understanding and mindful person,” Omar says. “He definitely does take other people’s opinions into account and bases decisions on everyone’s input on an idea.”

Omar says he enjoys Backyard Brew and all he has learned from his cousin. Although Omar no longer has the time to work there, the cafe provides an inspiring story and a community where Omar can relax with friends and family.