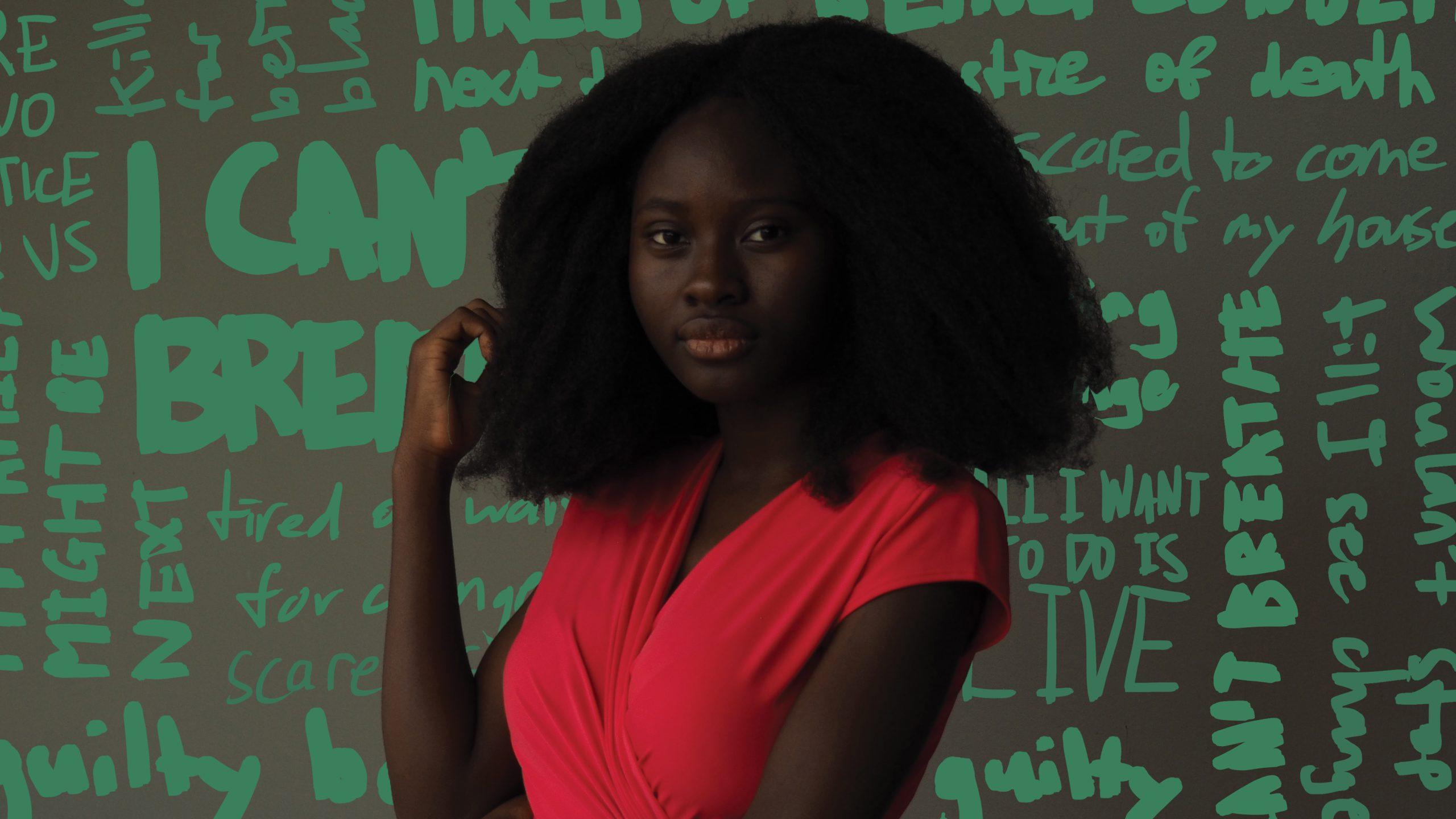 SPEAKING HER MIND — As a part of Verde’s Black Lives Matter submissions, Wumi Ogunlade wrote a poem using the refrain of “I Can’t Breathe” after the murder of George Floyd. Superimposed on the background of a portrait of Ogunlade, the poem is an example of how she uses her voice for change. “I would like a government that ... sees everyone as equal,” Ogunlade says. Photo: Audrey Joachim, Art: Zander Leong

Head held high, Palo Alto High School senior Wumi Ogunlade delivers her debate case to the panel of squares in front of her on her screen.

“Democracy means rule by the people,” she says. She doesn’t back down, and looks the camera straight in the eye.

Ogunlade has traveled across the globe, experiencing her fair share of change, but speech and debate has helped her find a voice to speak out for what she believes in.

From Nigeria to America

Ogunlade grew up in Ibadan, Nigeria, where she attended a private international school. She was first exposed to speech and debate at the age of eight.

“When I was little, I loved proving people wrong,” Ogunlade says. “I always wanted to be a lawyer.”

As a way of getting out of the house and pursuing that goal, Ogunlade joined her school’s debate club.

“She made the transition from the hardest form of debate there is. It’s extremely difficult to jump from platform to platform, because they are so different from each other.”

In December 2017, Ogunlade and her family moved from Nigeria to San Jose, where she struggled to adjust to a new school and community.

“The transition from being a regular Nigerian to an African American was crazy,” Ogunlade says. “People would come to me and say, ‘What’s it like in Nigeria? Are there a lot of poor people there?’ Once someone asked me, ‘Do you guys live with lions?’ I said that I lived in Nigeria, not in the jungle.”

At her high school in San Jose, Ogunlade continued to participate in speech and debate as an extracurricular to continue her passion and build new friendships. Debate in America, however, was different from what she had previously learned.

“It was the total opposite [from Nigeria],” Ogunlade says. “I had to learn everything from scratch.”

Due to her family’s move from Nigeria to San Jose, and then later to Palo Alto, Ogunlade has been forced to adapt to different debate styles depending on what each school had to offer. Over the course of her debating career, she has learned three types of debate. According to Jennie Savage, Paly’s Speech and Debate coach, debaters often learn one of the five forms of debate and spend years mastering it.

“What Wumi did was difficult,” Savage says. “She made the transition from the hardest form of debate there is. It’s extremely difficult to jump from platform to platform, because they are so different from each other.”

Ogunlade spent months taking on an entirely new form of debate: Lincoln-Douglas. This form involves one debater affirming the topic and the other negating. Lincoln-Douglas debaters have a total of 13 minutes of speaking time distributed in two to three speeches.

Without the support of a team member, Ogunlade was forced to rethink her debating strategy as she dove headfirst into learning the new and unfamiliar style.

Despite Ogunlade’s perseverance, there were plenty of debate matches that ended in a loss. Her losses further drove her desire to succeed, and she was determined to learn something new from every defeat.

“When you lose, the coach focuses more on you,” Ogunlade says. “They show you what to do differently.”

This philosophy is something the Paly Speech and Debate team emphasizes.

“Losing forces you to examine how you can be better,” Savage says. “That’s the part where you get not only intellectual growth but personal growth.”

Ogunlade signs up for every practice debate she can, working to hone her skills.

“I definitely want to be a great debater, but you have to start from somewhere,” Ogunlade says. “ I definitely won’t stop, because debate is something that helped me a lot in my public speaking, in my confidence —everything.”

After moving to Palo Alto, Ogunlade also became an active member of multiple community activist groups. Gaining confidence through speech and debate, she felt the urge to speak up about social issues she’d witnessed while growing up in Nigeria.

“If my mom gives people money, instead of saying ‘Thank you, madam,’ they go to my dad and say ‘Thank you, sir’ instead,” Ogunlade says. “They believe that whatever money she got is from the men. They just don’t see women high up.”

These injustices motivated Ogunlade to join IGNITE, a non-partisan organization created to address the lack of women in politics. Over the summer, Ogunlade became one of its ambassadors, using social media to refer people to Sofia, an online chatbot created by IGNITE that walks users through the process of registering to
vote, or creating a plan if they are not yet eligible to vote.

As a strong advocate for civic engagement, Ogunlade has also worked relentlessly to mail postcards encouraging people to vote in the upcoming election. Working alongside other youth to create change is most inspiring, in her eyes.

“I feel like my generation is going to be a game changer,” Ogunlade says. “We are all much more enlightened and more people are going to school.”

As well as being an advocate for voters, Ogunlade is a member of Paly’s Black Student Union, and she uses her poetry as both a creative outlet and a platform to speak about the injustices the Black community faces in America. Ogunlade wrote a poem addressing the Black Lives Movement to highlight racial injustice that exists in her community.

After graduating from high school, Ogunlade plans to continue advocating for social change; her dream is to return to Nigeria after college to educate even more people about women’s equality and the importance of speaking and participating in government.

“I know that in the future I want to start my own non-profit [in Nigeria],” Ogunlade says. “The government needs to do a lot more in Nigeria — they don’t involve themselves at all with the people.”

Whether it’s through debate or her activism, Ogunlade strives to be the best she can be, no matter the obstacles that are thrown her way. Though her journey to find her voice took years, she now uses it to fight for the many injustices she notices in her communities. 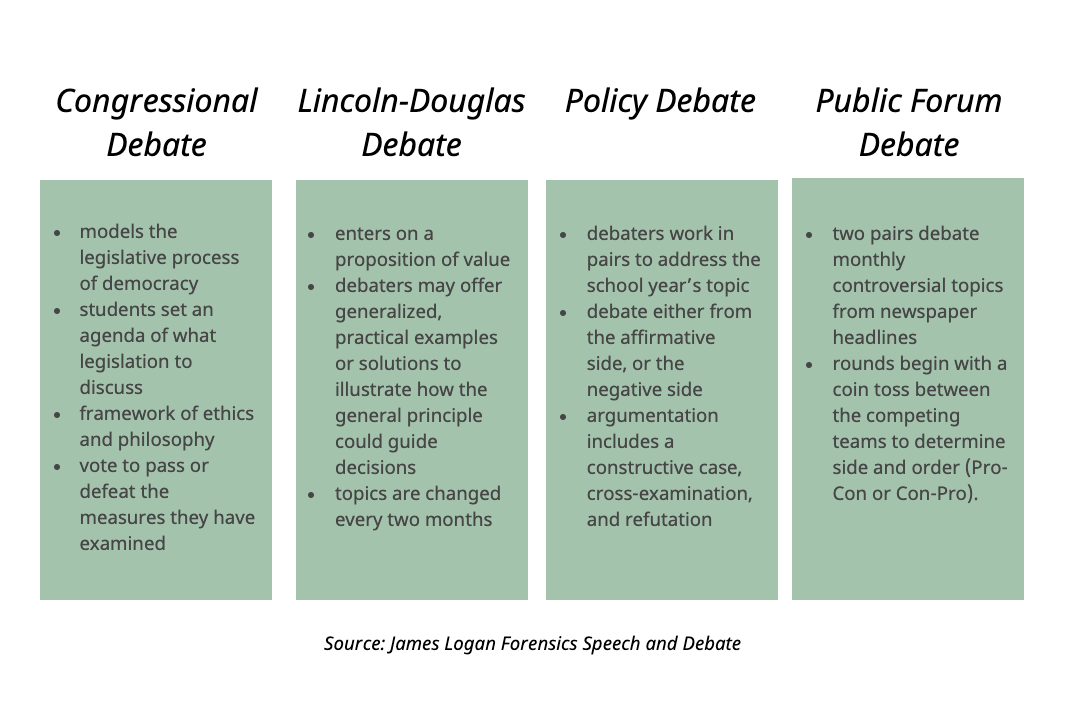 High school debaters like Ogunlade are able to partake in a variety of debate styles, including Congressional, Lincoln-Douglas, Policy, and Public Forum.

Letter to the Editors: “I Can’t Breathe” by Wumi Ogunlade

From the Editors: A better world is possible