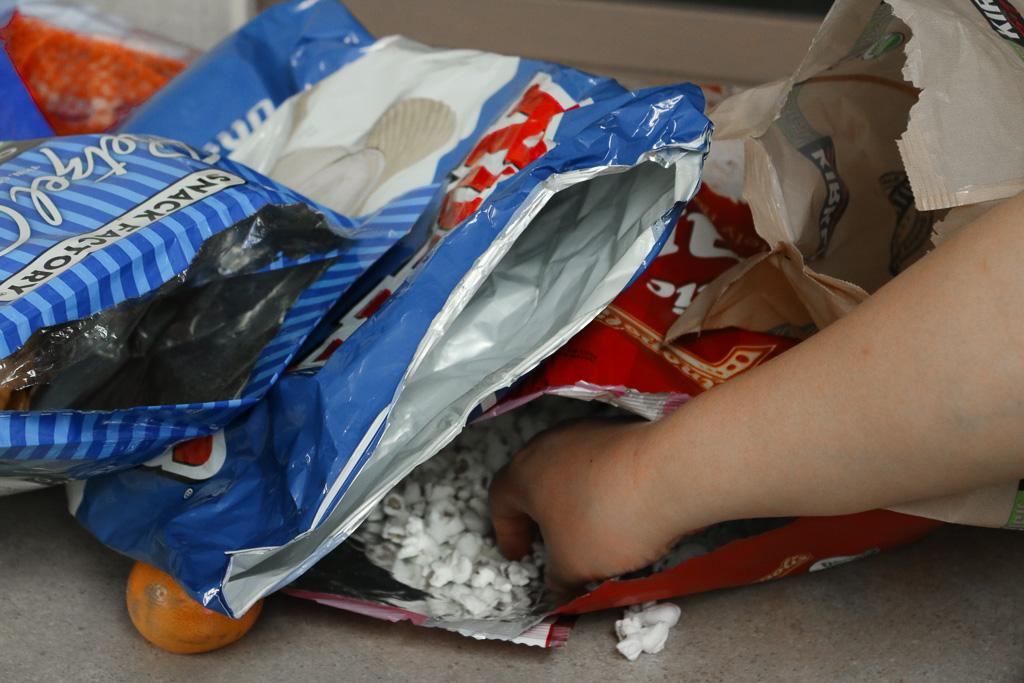 Feeding anxiety: Reasons behind the need to stress eat

Everyone has been stressed out at some point in their lives. Common ways to relieve stress are exercising, listening to music or hanging out with friends. However, some people make the unhealthy decision of hanging out with their friends Ben and Jerry, Ronald McDonald and Papa John. 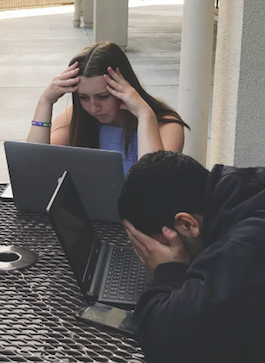 A Paly course load can be very overwhelming and stressful, at times. With so much pressure, it’s unsurprising that many students turn to food to relieve their stress. Sophomores Kaitlyn Meyer (left) and Dara Heydapour (right) struggle with end-of-year stress. Photo by Anna Tomz

Many adults and students succumb to unhealthy eating for stress relief. Most of the time, the foods that are consumed are fatty or sugary. Studies show that long-term stress causes an increase in appetite, whereas short-term stress causes a lack in appetite. According to Harvard Medical School, when a person is stressed out in the long-term, the adrenal glands in their brain release the  hormone cortisol, which increases appetite. Other studies have shown that once fatty or sugary foods are consumed, people tend to be less stressed out, both physically and mentally.

As discovered through an experiment with rats,  comfort foods subconsciously reduce the body’s physical stress response, according to scientist Yvonne Ulrich-Lai of the University of Cincinnati College of Medicine. In this experiment, the taste of sugar reduced the rats’ stress. With rats that were in the control group with water, their stress level was unchanged.

Not only does stress eating sugary and fatty foods cause weight gain, but when a person is stressed out they may lose sleep, exercise less, and drink more alcohol. These actions cause weight gain among other negative side effects. Less sleep contributes to a higher blood pressure and an increase in cortisol, further perpetuating the stress eating cycle. Less exercise causes a harmful buildup of lactic acid in muscles. According to a study by psychiatrist Colin Brewer and neuroradiologist Lance Perrett, alcohol consumption causes liver damage and death of brain cells.

“Stress eating can hurt a person physically, but also mentally if they are constantly convincing themselves they need to eat so that they are in their healthiest state of mind,” Paly junior Nura Mostaghimi says.

If a person is convinced they need to eat in order to function to their highest ability, they will continue to eat, even if it causes negative side effects. With finals, the SAT, the ACT and SAT subject tests coming up, students are almost guaranteed to be stressed out.

When a person is stressed, the adrenal glands in their brain release the  hormone cortisol, which increases appetite.

There are healthy alternatives to sugary and fatty foods that still have the same benefits of providing comfort and easing stress, according to John Cyran, a professor at University College Cork. This includes foods that are rich in fiber, such as green veggies, legumes, beans, and Jerusalem artichokes. This affects a person’s microbiome which is the bacteria in their stomach and intestines. The microbiome hosts healthy bacteria which prevent stress and anxiety. However, one vegetable will not do the trick of preventing stress. The key is to structure the entire diet in order to let probiotic bacteria work.

There are other ways to curb unhealthy stress or stress eating, such as yoga, meditation, talking to friends and family or unwinding in an emotional support group. Constantly staying busy, taking unhealthy food out of the house or placing it out of view and eating healthy snacks are also good preventative measures to take.

“I usually try to balance it out,” Paly sophomore Noa Lehrer says. “I have a plate of fruits or veggies and some tea in my room to snack on while working but I also bring a few pieces of candy, you know, to reward myself for studying.”

Striking a balance of eating well while staying motivated is essential to a healthy lifestyle and reduced stress without eating fatty or sugary foods. If you stress eat, try to recognize the other alternatives to relieve stress. Exercising, listening to music, eating healthier snacks and being around other people are all great ways to live a life (hopefully) without stress eating.