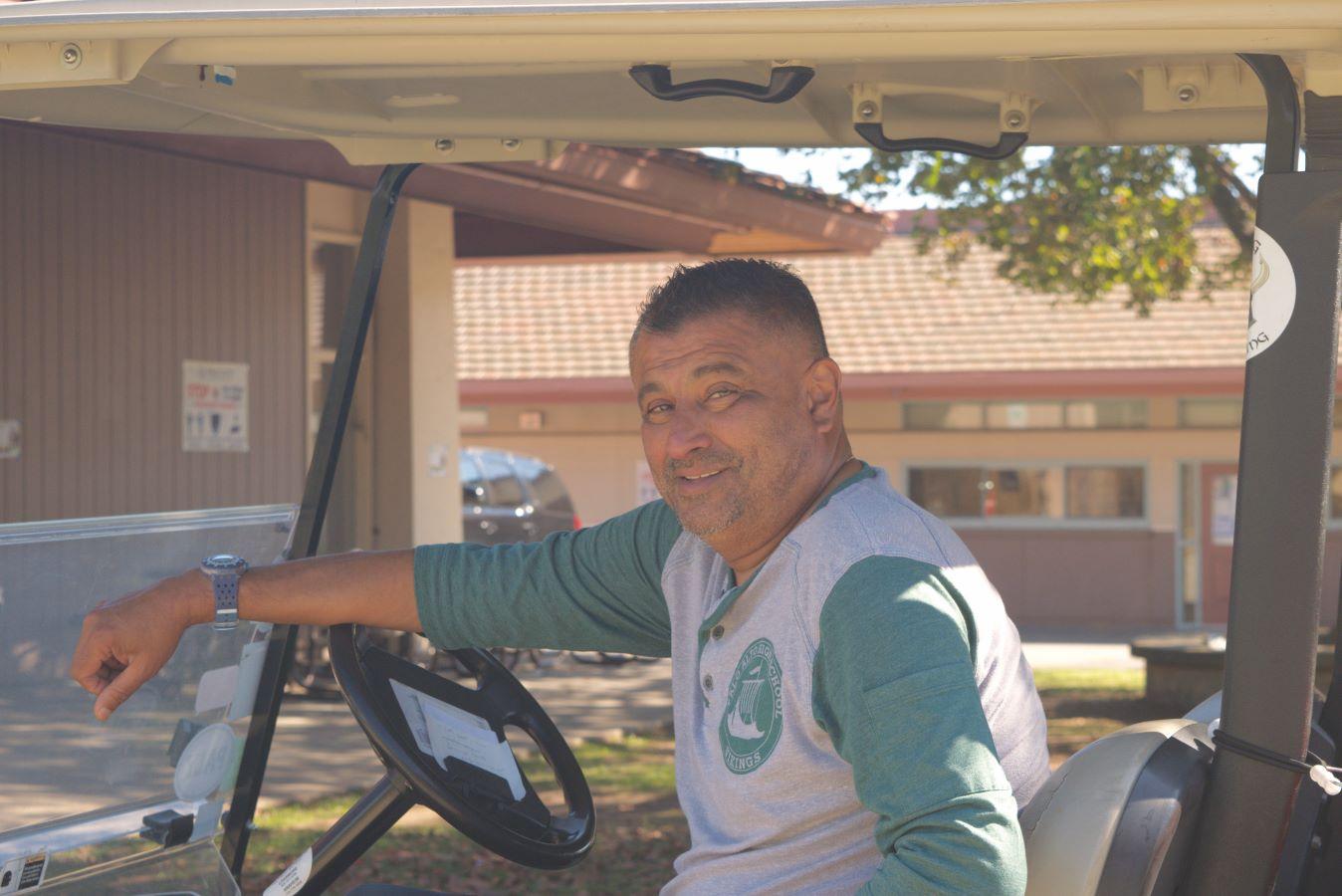 CRUISING CRUZ — Supervisor Ernesto Cruz drives around Paly's campus on his iconic golf cart, giving him the opportunity to form meaningful relationships with many students, especially Paly's Spanish speakers. "I'm trying to make them feel like we part of it, and that we don't have to change," Cruz said. Photo: Anushe Irani

“How are you?” responds Cronin, and a short conversation ensues. Moments later, Cruz sees another Paly employee, remarking, “I get to meet a lot of beautiful people, like this one coming up!”

The young Paly alumnus, BJ Boyd, responds lovingly, “[Ernesto is] one of the greatest guys in the world.”

Cruz can be found directing parking in the morning, monitoring the crosswalk to Town and Country at lunch and hanging around the Quad at all hours of the school day. As campus supervisor, Cruz ensures the wellbeing and safety of students and staff, but this is only one aspect of his life.

Much of Cruz’s journey through life has revolved around soccer. Born in El Salvador, he grew up playing with friends in the streets of his neighborhood, and later even played in the minor leagues.

“After school, I would go practice with my club team and then back home [and] do some homework a little bit,” Cruz said. “We didn’t have much homework. And then [we] played [soccer] at night in the streets. That was the best time.”

However, Cruz’s adolescence was interrupted in 1979 by the Salvadoran Civil War, fought between the military-led government and left-wing militia groups. Fearing violence and hoping for salvation, Cruz was forced to say painful goodbyes to his beloved grandmother and flee his home to the United States.

“I can’t change myself. And in this community, it’s okay to be different.”

Once in San Francisco, Cruz shared a cramped, single-room apartment with his mother. He felt a responsibility to take care of his mother and himself, prompting him to enroll in the same English class twice — once in the morning and again in the afternoon for extra practice — at a San Francisco community college.

“It’s funny because I used to get criticized in my own class because I wanted to learn the language so badly,” Cruz said. “Everybody was talking in Spanish in the class and I was the only one that didn’t say [any] words in Spanish.”

EARNEST ERNESTO — In having a similar mindset as his mentor, another soccer coach also from El Salvador, Cruz appreciates the opportunity to teach kids who have less experience. ”It’s so sad to see a kid watching and other kids playing and they don’t have the opportunity [to play],” Cruz said. “But I prepare them … All of a sudden they become players.” Photo: Carlota Blanco

Cruz was working in construction when he was hired as campus supervisor for Paly in 2004, later returning to his athletic roots and becoming the school’s girls varsity soccer coach. In his first years as coach, he faced criticism of his coaching style.

“It was hard for me to fit in because I didn’t have a big record in my resume as a coach,” Cruz said. “I picked two freshmen [for] varsity as starters and the parents went crazy. They told me that I didn’t know what I was doing. At the end of the season those two freshmen scored 34 goals between both of them.”

On and off the field, Cruz has created meaningful connections with many Paly students, including a football game against Los Gatos High School where the two players who scored the winning touchdown dedicated it to Cruz.

“[One of them] ran straight to me and he says, ‘That’s for you Ernesto,’” Cruz said. “And I feel so special. And I didn’t know those two guys who were gonna be so successful in life too, you know?”

Cruz said he is especially grateful for the Palo Alto community’s open-mindedness and general acceptance of people that come from different backgrounds, like him.

“I got to be honest, when I came to Palo Alto and started working here, I felt a little bit intimidated and I was very skeptical to say certain things,” Cruz said. “But after a while, I say, what the heck … I can’t change myself. And in this community, it’s okay to be different.”

After successfully building a life in the Bay Area, Cruz wanted to give back to his country while continuing to follow his passion for soccer. Every year, Cruz takes soccer teams to El Salvador, collecting uniforms, soccer equipment and clothing from Bay Area schools and bringing them to small towns in El Salvador.

Cruz also brings players’ parents on the trips, often receiving comments regarding how warm and joyful the Salvadoran community is.

“For El Salvadorans, material is not that important,” Cruz said. “In my community, they are very happy kids. They’re always smiling and they’re always laughing at everything. You go to my country, everybody smiles.”

“That’s my passion, to have a kid who nobody wants and give them hope [to] start enjoying the game.”

Cruz aspires to help players improve their skills through his coaching, especially those who are not considered the best.

“That’s my passion, to have a kid who nobody wants and give them hope [to] start enjoying the game,” Cruz said. “Because that’s what it’s all about. I got parents with tears coming down to me and saying, ‘I didn’t know my daughter could be that good.’”

While Cruz plans on retiring in the near future, he wants to continue with his soccer program.

“I want to go back to El Salvador and help the kids and work with my people trying to help them up,” Cruz said. “So that’s my goal, to have an academy there.”