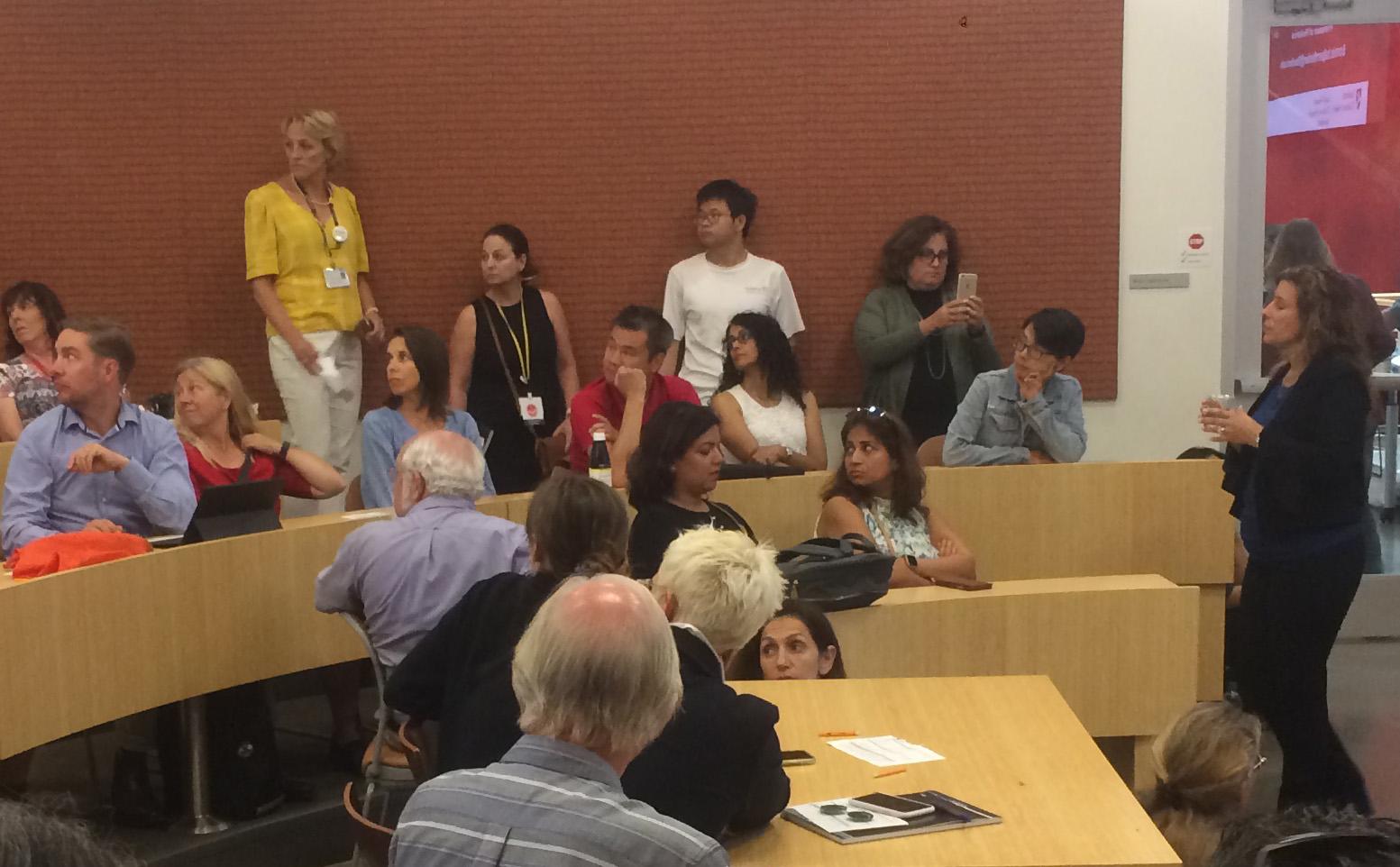 DISCUSSION OF DISEASE Stanford University Professor of Pediatrics Bonnie Halpern-Felsher speaks to an audience of concerned parents, students and Stanford employees about the dangers of vaping at a recent meeting. Photo by Avery Hanna

Following a wave of vaping-related illness that has left 15 dead and over 800 sick, Palo Alto parents, the school board and government officials are looking for solutions.

Drugs, alcohol and nicotine are not allowed on any Palo Alto Unified School District campuses regardless of the person’s age, but it takes more than just a policy to solve the actual issue, said Jennifer DiBrienza, president of the Palo Alto Board of Education in an interview with Verde last month.

With Palo Alto parents more concerned as a result of the vaping illness, there is a greater push for action.

“I think we’ve just got to figure out what’s next,” Dibrienza said. “There’s education stuff in place and we’ve got a policy in place, but what does that enforcement look like while keeping it productive.”

In an effort to address the epidemic at hand, on Sept. 11 the White House announced its intentions to ban all non-tobacco flavored e-cigarettes.

Though some applauded President Donald Trump for his efforts, others urged the administration and the Food and Drug Administration to go further and ban e-cigarettes entirely, until doctors could better understand the issue at hand. At Palo Alto High School, 23.5% of 183 randomly surveyed students suggest that vaping should be banned for people of all ages.

With cases of the illness popping up across the country, the e-cigarette company Juul Labs has come under attack. On Sept. 25 the company announced that the CEO Kevin Burns would resign and be replaced by K.C. Crosthwaite, a former tobacco company executive.

Stanford University Professor of Pediatrics Bonnie Halpern-Felsher spoke to an audience of doctors, community leaders and concerned parents, warning of the dangers of vaping on Sept. 11 at Stanford University.

Despite the common belief that vaping is better than smoking, Halpern-Felsher says that with the recent epidemic, she is now unsure of this.

“We don’t know what the long-term effects are and we don’t even know all the short-term effects.”

Though the deaths and prevalence of recent cases are new, Halpern-Felsher says that vaping-related health issues have been a problem for years.

“It’s not just now,” she said. “I’ve talked to ER doctors who have said they’ve been seeing kids over the last few years coming in with pneumonia that they can only trace back to vaping”

According to a survey conducted by Verde Magazine, over 80% of Paly students believe that vaping is dangerous, testimony to the impact of recent educational efforts by organizations such as the Paly Parent Teacher Student Association.

Elizabeth Olson is the president of the PTSA, which has been working alongside Paly administration, the Paly Wellness Center, as well as local health experts to address vaping in Paly. She says that a PTA Council Anti-Vaping Committee has been established and that a state PTA resolution is in the process of being drafted.

“Now that the effects of vaping are becoming clearer and the headlines are national, we are seeing an increase in concern from parents,” Olson said. “Some of them are just realizing their kids are addicted to vaping and are of course extremely worried.”

It’s all smoke and mirrors

Administration must find better solution to the vaping problem