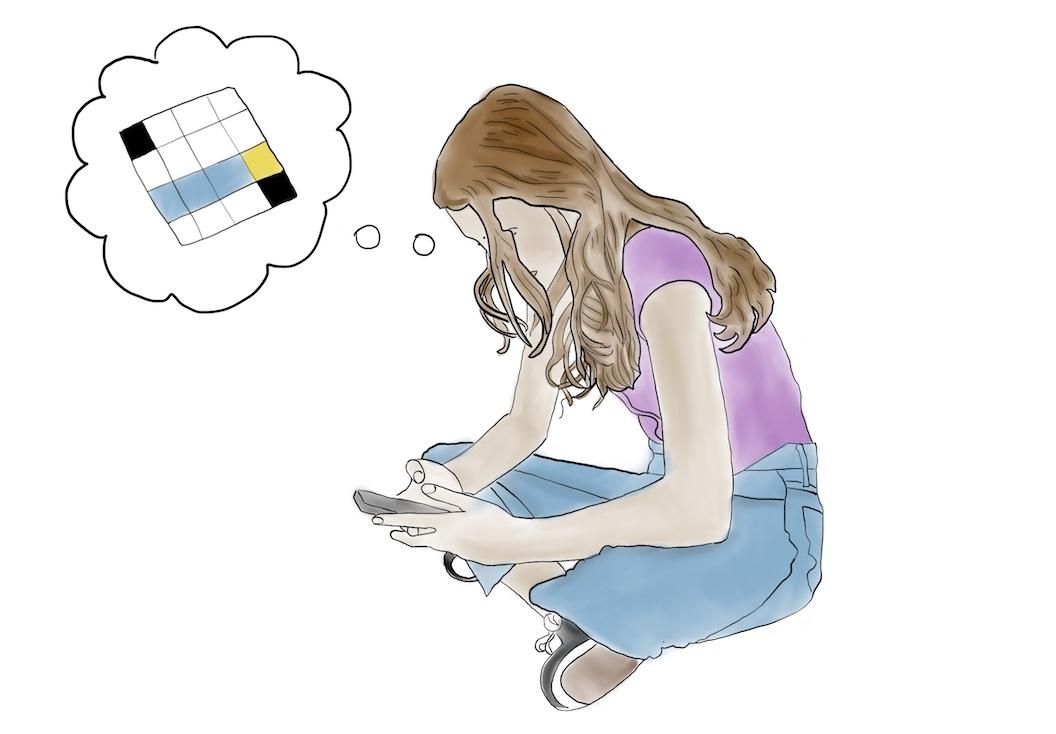 They’re flexed when genuflecting. What could this possibly mean? Junior Carly Chandler stares at her phone in confusion and deep thought. After a few moments, a burst of insight hits her, perhaps because the answer was right in front of her: knees!

Clues like these are part of the daily New York Times mini crossword puzzle, released on weekdays at 7 p.m. PST and 3 p.m. PST on weekends. The New York Times created its miniature crossword — coined the “Mini” — in the summer of 2014 to help beginners practice their solving skills before scaling up to the main crossword.

Once an activity popular among the older generations and avid linguists, word games have recently become a popular hobby teens do with their friends.

“It made me really happy because when we were writing it, I was a little worried that people wouldn’t be interested. But at lunch you can see a bunch of people doing it and someone even DMed me on Instagram asking for help.”

“I introduced it [the Mini] to a lot of my friends and I got them to play them as well,” Hiremath said. “Eventually I realized that they had a leaderboard for the daily mini, so I tried to get as many people as possible to join mine.”

The NYT mini crossword has a leaderboard in the NYT Games app that players can personalize — those who they send their ‘NYT Mini link’ to can be added to their exclusive finisher’s list. On this board, players can see one another’s solving times, creating an element of friendly competition and social media sharing that many teen players seem to enjoy.

Another online word puzzle rising in popularity among teens is Wordle. Released everyday at midnight PST, users have six tries to guess a five-letter word. Once each player guesses the word of the day, they have the option to share their process with their friends in the form of a small graphic made up of colored, square-shaped emojis representing their journey to solving the puzzle. These simple yet widely understable graphics can also be easily shared to Twitter feeds and Facebook timelines.

“In the science lunch room, I got at least one other teacher hooked on it [Wordle]. Several of us play it [now].”

Created by Josh Wardle, released in October of 2021 and recently acquired by the NYT, Wordle has gained exponential popularity with over 300,000 daily users, according to the NYT.

“I like how you can share it with your friends and compete with friends and family,” senior Hathaway Bush said. “It’s also a super short game so it’s fun to help me wake up in the morning.”

Students are not the only ones who have become obsessed with Wordle recently — some of their teachers have too.

“In the science lunch room, I got at least one other teacher hooked on it [Wordle],” Lupoli said. “Several of us play it [now].”

As the popularity of word games has grown across Paly’s community, school publications have capitalized on this trend. In November 2021, The Campanile started including their own unique crossword in the lifestyle section of their newspaper.

The crossword is created by seniors Neil Rathi and Ronak Monga, who try to incorporate Paly themes, like Spirit Week activities, in the puzzle’s key words.

Rathi and Monga both agree that the most rewarding thing about publishing their crossword is seeing people solving it together at school.

“It made me really happy because when we were writing it, I was a little worried that people wouldn’t be interested,” Monga said. “But at lunch you can see a bunch of people doing it and someone even DMed me on Instagram asking for help.”