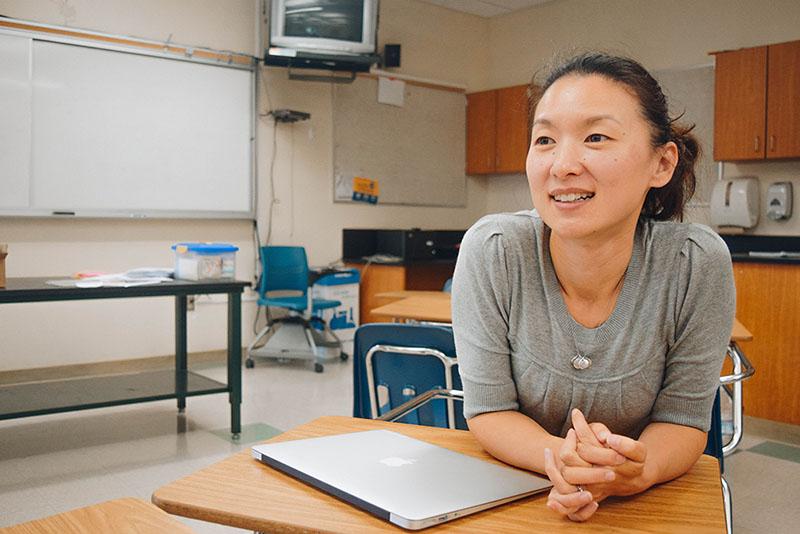 “I hope this [photograph] doesn’t embarrass me later.” With a hesitant smile and a tone of regret, Vivian Byun, the newest member of Palo Alto High School’s science faculty team, scrolls through her laptop, grudgingly pulling up a picture from her high school yearbook. Cheerleader Byun holds up a “WIN” poster, cheering on San Francisco’s Lowell High School.

Behind her confidence in the photo, Byun struggled with opening up and satisfying her parents’ expectations as many of her students do today. Byun’s desire to make her parents proud would pave the way for the rest of her academic and professional life and resonates in her teaching today.

Born and raised in the Bay Area, Byun was a shy teen who fumbled with the leg warmers and crimped hair of the late 70s and early 80s.

Like many immigrant families, Byun’s parents wished for Byun to reach heights they could not as foreigners — in their eyes, doing well in school would be the key  to her success.

“I had that dad that wasn’t pleased with my A-minuses,” Byun says. “Everything I did … the Chinese translation [for it] is ‘not bad.’ He would never say ‘That’s great’ … I think that’s hard to hear and needing that validation from my dad, that’s something I always craved.”

Sunday afternoons watching football games were one of the few things that drew Byun and her father together. It was during a San Francisco 49ers game that Byun’s father asked her, one day, “Why don’t you become a pom pom girl?”

She took this offhand comment to heart as an opportunity to impress her father.

Byun made the varsity cheerleading team her senior year, and while her father reacted with little interest, it proved to be an invaluable experience. Between the flips and the chants, Byun was able to come out of her shell and find her voice.

“I was that kid in the back who knew all the answers but never shared,” Byun says. “It [cheerleading] really changed me.”

Her father-daughter relationship would continue to be a pivotal dynamic in Byun’s life.

Vivian Byun (pictured far right) kneels as she holds up a poster supporting her high school team. Byun, a biology and chemistry teacher, recently brought her passion for teaching to the Paly campus. Photo by Lowell High School yearbook.

With senior year and college application season came a new level of tension between the expectations her father set and the goals Byun had in mind.

“There were a handful of colleges that I was allowed to go to,” Byun says. But when she was finally admitted to the University of California Los Angeles as major in psychobiology, she felt out of place.

Four years passed, and before finalizing her decision to go to medical school, Byun decided to study abroad in China.

“I thought I would have this cultural experience,” Byun says. Instead — thanks to the existential philosophers and English majors she met during her travels — she found herself faced with a life-changing decision.

“What are my values, what are the things I’m holding onto? That even when I was in a different country, [what qualities] were still me?” Byun questioned the years she spent on the medical school track and faced her choice head on.

“I realized I really didn’t enjoy the rat race that everyone was running,” Byun says. Once she came back to UCLA, she had a new perspective on what it was that she truly wanted to do: help people. In turn, Byun realized teaching would be the way to accomplish her goals.

Byun’s father was less than thrilled.

“There was a lot of disappointment. I think he felt like he spent all this money, and that I should become a doctor to support them [my parents],” Byun says. “But I loved my job … I felt a lot of love from my students.”

Now, years later, Byun and her father are able to see eye-to-eye. “I know that he has high expectations of me, and now that I’m a parent myself I know why he pushed me,” Byun says. “I do appreciate that he did that for me, but going through it, it was hard.”

“I’m not going to teach it [biology] the way I learned it,” Byun says. “Now, it’s so important for kids to see those types of connections, like why is this important? Why do we care about this?”

Before being swept into to Paly’s structured curricula, Byun helped pilot the new science curriculum at the Nueva Upper School in San Mateo.

“I was spending so many hours just building things, generating ideas about lessons and labs,” Byun says. Along with her fellow instructors, she pondered how to create a science program worth implementing. “How do I make an experiment not a cookie cutter; how do I get them [students] to go and do science that’s authentic to them?”

This fall, Byun took this sentiment from the small Nueva lake to Paly’s ocean of a campus. As a new teacher, she experienced the inherent struggles of being the new kid at a school.

“It’s hard being a new teacher, you’re kind of being tested,” Byun says. “I want them [students] to know I’m a teacher who cares for them, but how do they see that?”

Fortunately, Byun has been able to make the transition smoothly thanks to the help of friendly fellow staff and administration. “My team and the science department, they’re so nice and joyful,” Byun says. “People like being here, and that’s why I like the community.” 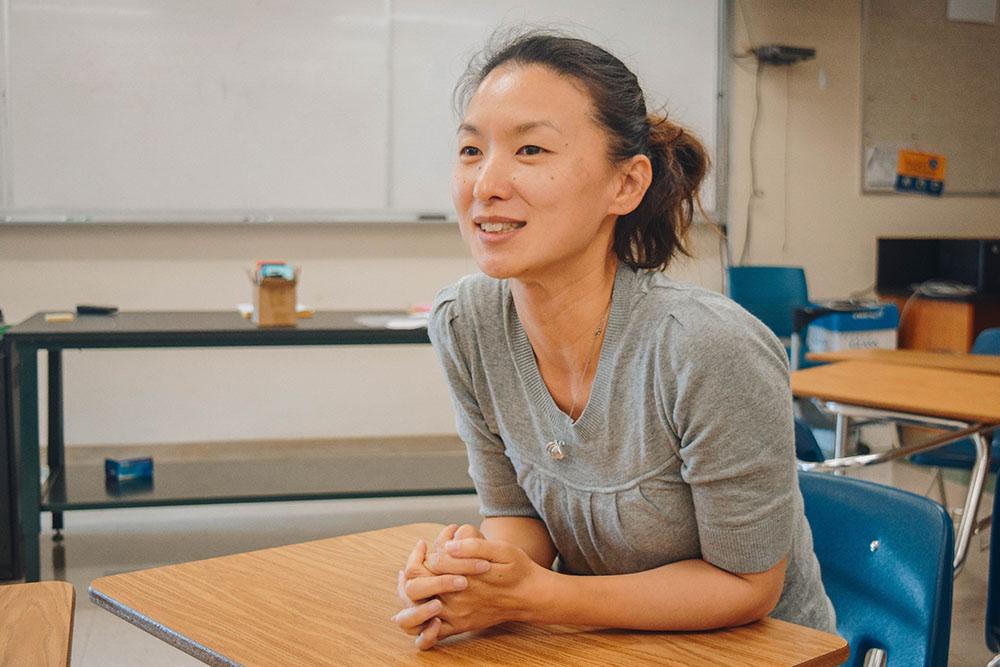 Byun recalls her high school years in her biology classroom. “I’m not going to teach it [biology] the way I learned it,” Byun says. She strives to emphasize the real-world connection for material learned in class. Photo by Angela Liu.

Cheering from the sidelines

Byun tries to give students the support she feels she lacked at times as a student.

Byun’s motto for teaching is to emphasize the connection of in-class material to real-world events.

Her efforts to draw attention to the broader implications of biology have not gone unnoticed.

“She has a more scenario-based teaching style instead of theoretical-based,” Advanced Placement Biology student junior David Foster says. “You can connect it to the world.”

Although Byun’s pompoms have long since been stored away, she still remains a cheerleader for her students.

“I’ll feel successful if my students feel empowered that they can answer any question because they know how to,” Byun says. “My job is to help you get there.”