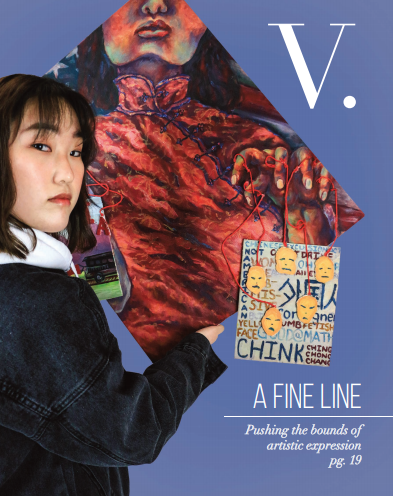 Behind the cover of Volume 20, Issue 4: A fine line

ON THE COVER of Verde Magazine Volume 20, Issue 4

In this issue, Photo Director Lucia Amieva-Wang captures senior Rebecca Cheng’s controversial painting “The Puppet Master,” which was removed from its display at the PAUSD district office for its inclusion of racial slurs. Our decision to print the painting in its entirety on the cover was driven by AP Style guidelines.

Over four days of contemplation about whether to include the racial slur “ch-nk” from the painting on the cover, and manifold conversations with professional Asian-American journalists, advocates and magazine staffers, the editors-in-chief decided to publish Cheng’s piece in all — including the racial slur. In this following post, we, the editors, hope to give you insight on what the deliberation process was like.   v

From the formation of the story

While writing the story, staff writers Kaitlyn Ho, Kobi Johnsson and Sasha Poor examined multiple opinions about the district’s decision to take down the art. They interviewed Cheng and students who experienced comparable censorship situations, but also the district art director who made the call on removing the painting from the district office.

“I thought it would be interesting to talk to the people who have been censored, but also to people who weren’t directly involved in it to see what the general consensus might not be regarding a specific incident,” Poor said.

Ho, who has a background in art and supported including the original artwork on the cover, found writing the story compelling as it debated the place of line-pushing art in society.

“As an artist myself, I often find that there is a fine link between what is acceptable and what is not,” Ho said. “I think this story is important because it explores dynamics between typical and social displays and provoking art.”

After these staffers wrote the story, designed and placed it in the final document along the rest of the issue, the magazine’s adviser, Paul Kandell suggested treading lightly on the decision to include the full artwork on the cover with the slur.

After staffers were long gone, the leadership team stayed behind two extra days in search of a correct journalistic decision, producing many varying versions of the cover — one with a grey gradient box overlaying the slur, another with the headline covering the slur and one with a photo that obscured the slur with Cheng’s body placement.

COVERING IT UP EIC Ashley Hitchings sits at a computer on the last day of production producing multiple version of cover proposals. Fueled on after-production chips and salsa, she rehashes advice they received from professional journalists with her fellow EICs.

They held prolonged conversations touching on the ethics, personal biases and how this would impact our magazine’s reputation with Palo Alto High School families. They contacted professionals in the field of journalism for a third opinion beyond theirs and that of our adviser’s. As stated in the letter from the editors’, they decided based on “consultation of AP Style guidelines and conversations with professional journalists, including associates of the Asian American Journalists Association and the Northwestern-Medill School of Journalism.” To include the opinions of the staff members, the EICs brought the decision for a discussion and vote in class — the staffers overwhelmingly supported printing the full art on the cover, undisturbed.

“I supported putting the racial slur on the cover of the magazine because it was an essential element of her art piece,” Ho said. “The word was not included to offend anyone. Instead, it serves as a reminder of the racism that Asian-Americans face daily. It would not be appropriate of us to initiate a discussion about censorship while limiting her freedom of expression.”

Regarding this piece, from the editors

After the vote with staff yielded majority support, the editors relayed the  decision to the printer, with the following editors’ note included before the story:

“While we recognize that racial slurs such as “ch-nk” represent the institutionalized oppression and systematic disenfranchisement of minority groups, we believe that its use is essential to the discussion of purposefully provocative art in “Drawing a Fine Line.” According to AP Style guidelines, ethnic slurs should only be used when they are “essential to the story.” By including it both in the story and its cover, we hope to depict senior Rebecca Cheng’s art and message as she intended to convey it. For more information, refer to our letter from the editors.”