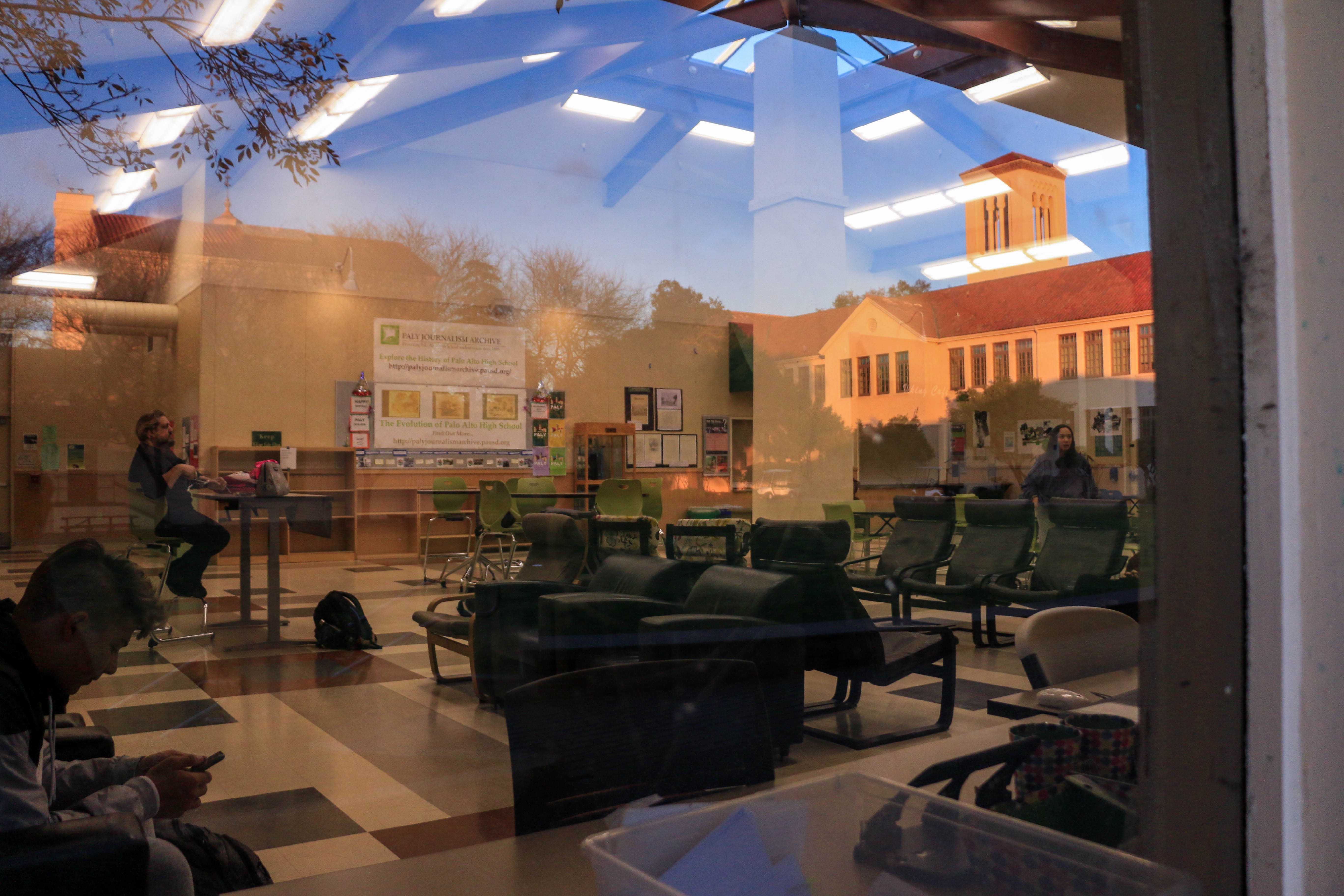 It is 7:15 a.m. when the first light on campus flickers on. The only sounds audible are the chirping of morning birds and the jingling of Travis Fenech’s keys as he approaches Palo Alto High School’s Student Center. Once the fluorescent lights turn on, Fenech makes his daily rotation around the building, stopping at each door to unlock it, peek his head out into the morning air, slide the lock block into position and move on to the next.

“I think this [the Student Center] with the lights was kind of a big beacon for people,” says Fenech, a student aid and Site Council member.

For three weeks now, Paly’s Student Center has been open bright and early for those who arrive at school before first period. Although the Site Council only rolled out the early opening initiative this semester, they have been been discussing, planning and advocating for it for well over a year, according to Principal Adam Paulson.

“Our hope was to serve breakfast for anyone who needed it,” Paulson stated in an email. “This issue is more complex than just offering food, though. Our Site Council heard about the need and offered to fund the supervision part.”

While the Student Center has yet to begin serving breakfast, Fenech and campus supervisor Norma Hymes have assumed the responsibility of morning supervision.

“When they [Site Council] said they wanted someone to open it [Student Center] early, I said, ‘Well I’m already here at six, so I’d be happy to come open it because I’m just sitting waiting for school to start anyways,’” Fenech says. 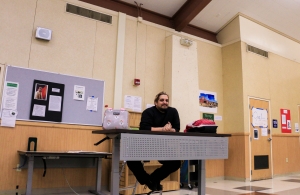 SUPERVISING – Travis Fenech, a Paly student aid and Site Council member, poses for a photo from his usual spot at the front of the Student Center. Fenech commutes from San Jose, arriving on campus well before school begins, which prompted him to volunteer to supervise the Student Center.

As of now, Fenech takes on the morning supervision shift and then switches with Hymes when the bell rings at 8:20 a.m. According to Fenech, students usually start filing in at 7:30 a.m., filling the tables and couches quietly and quickly.

Siblings Destinee and and Skylar Reynolds, a sophomore and freshman respectively, are two of the many students taking advantage of this new change on campus.

“It’s very helpful to us because our mom works early so we are here [at school] early,” Destinee says. “Because it’s [the Student Center] open, we are not out in the cold.”

Whether students are on campus due to buses operating on an early schedule, zero period Physical Education or parents commuting early to work, the Student Center is quickly becoming a dependable space open to students even as the sun is only rising.

Unlike the library or Media Arts Center, the Student Center does not have many strict rules regarding eating or talking, making it a uniquely relaxing place for students to hang out, Fenech says.

“It’s like a community place,” Fenech says. “I liken it to having the quad or a place where people kind of sit at … I just think it’s important in general. It’s nice for you guys [Paly students to] have a place to go where you don’t have to worry about rules.”

Those involved with this initiative have noticed that a community space such as the Student Center goes beyond merely providing an area for students to unwind — this open space can impact the wellbeing of students and how they feel on campus.

“I definitely think that creating that consistency is really good for you guys [Paly students],” Michael says. “Especially when everything else is all over the place for you.”

In addition to opening the Student Center early, Fenech says the Site Council has discussed serving food as well as providing homework help before school hours. However, these efforts have stalled, as Paulson says offering breakfast requires specific adherence to district guidelines.

“We do offer two meals on campus and have to prioritize those since a majority of our students eat during brunch and lunch,” Paulson states in an email.

“I think teenagers are always hungry and I think that having a warm place to go in the morning is important.”

In the meantime, Fenech and Vallen Queen, the assistant principal’s secretary, seek to convince Mayfield Bakery to donate leftover pastries to serve in the morning.

“I think teenagers are always hungry and I think that having a warm place to go in the morning is important,” Queen says. “Those two things have always just inspired me to have something for the kids.”

Three years ago, Queen had organized for breakfast foods to be donated and served in the tower building, but this proved hard to maintain on her own. Known throughout campus, Queen has made it a point to always have snacks for students and she continues to push for this with the earlier opening of the Student Center.

“I would feel really good if when I retired in a few years, I could say that I don’t think there’s ever going to be a hungry kid in the morning at Paly,” Queen says.