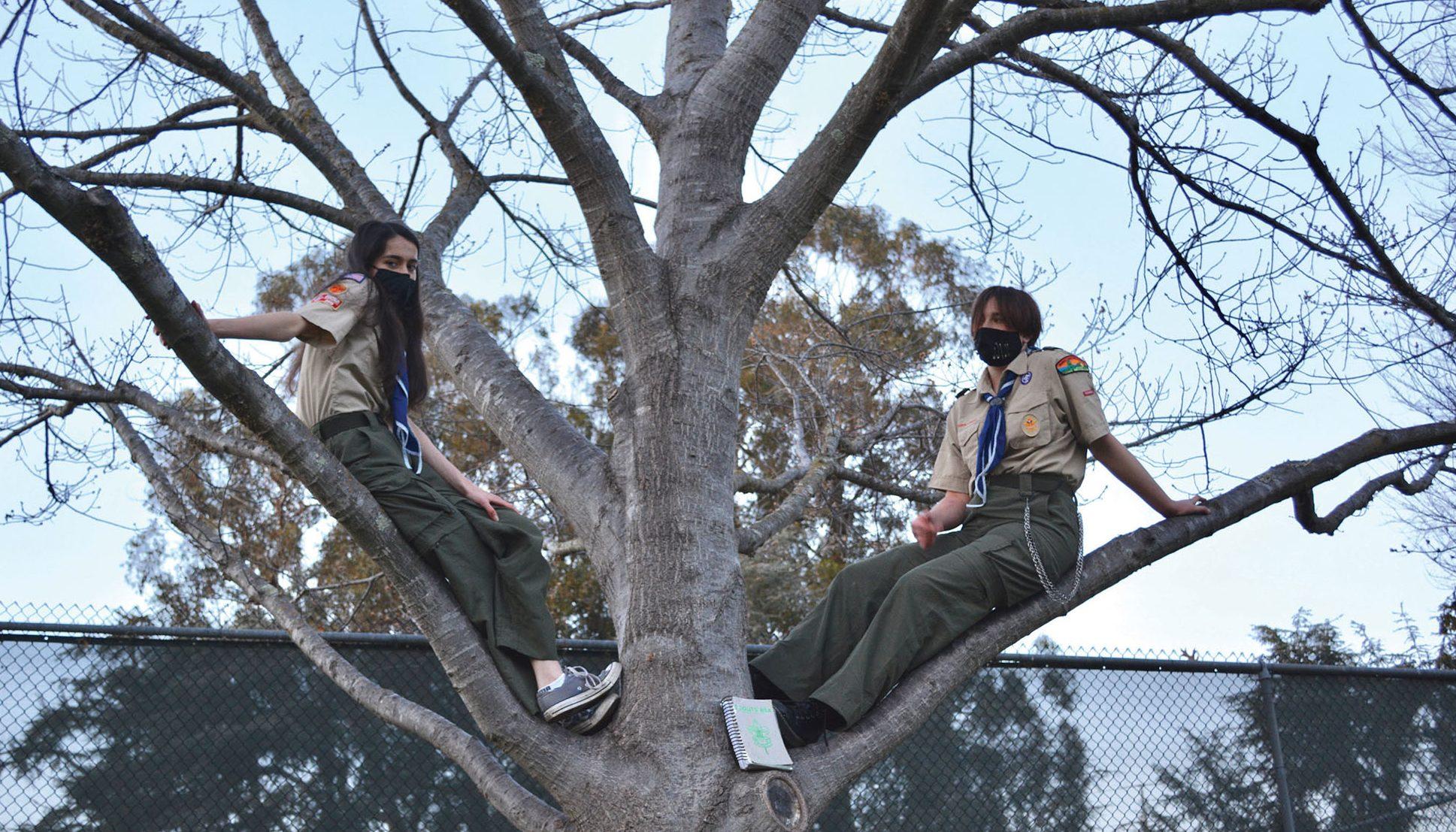 CLIMBING THE RANKS — Palo Alto High School sophomores Gabriela Hakeman (left) and Genevieve Thesen (right) pose on a tree. "I'd recommend it [Scouting] to anybody who likes the outdoors and is committed to working on something," Thesen said. Photo: Ella Burttrill

Sophomore Genevieve Thesen walked into the Pets in Need Foundation, a nonprofit animal shelter in Palo Alto, carrying a stack of wooden panels in her right arm and holding a toolbox with her left. An hour later, she closed her car door, a smile of satisfaction on her face. The structures of her raised garden beds were coming together seamlessly and with them, the once seemingly impossible goal of becoming an Eagle Scout was finally within reach.

Troop 4057 is the first all-girls Scouts troop in Palo Alto, established shortly after Boy Scouts of America officially began allowing girls into the organization in early 2019. Consisting of 25 girls divided between two patrols, the troop met on a regular basis for local outings in the Bay Area and annual Scout camps across California before the pandemic forced a transition online.

Thesen was not immediately interested when she first heard that Scouts was opening up to girls due to her unfamiliarity with the organization. However, a chance encounter during a backpacking trip on Mount Whitney led to a change of heart.

“While we were there, we met this man who was an Eagle Scout,” Thesen said. “He looks me up and down, and he sees me helping out with his daughter who is a little younger than I am and [I am] carrying her pack and lighting fires and building stoves, and he tells me that I need to join Boy Scouts.”

“We’ve been the only girls in some of the Scout camps we’ve been to, and the boys can occasionally be not so nice. They are weirded out and uncomfortable with us being there, so we’ve definitely had moments where we feel like outsiders.”

Thesen’s friend, freshman Rae Sox-Harris, was already familiar with Scouts and all that it entailed due to her brother and father’s active involvement in it. When Thesen and Sox-Harris decided together to become Scouts, the latter’s dad, Alex Sox-Harris, helped start up the Palo Alto girls’ troop, Troop 4057, as a separate entity within the larger Palo Alto Scouts establishment. Through word of mouth, the troop grew rapidly.

Though girls joining Scouts is no longer a rarity, the majority of the organization is still comprised of boys. Members of Troop 4057, including sophomore Gabriela Hakeman, have had generally positive interactions with their male counterparts.

“I think we’re pretty lucky in Palo Alto because the boys truly perceive us very well,” Hakeman said. “There were quite a few girls that joined at the same time that I did and as the founders, so I felt like there was a really strong and supportive community of other girls right off the bat who were interested in pushing past those boundaries.”

While the boys and girls usually have their own separate local outings, the two groups participate in the annual camps together. Oftentimes, the boys far outnumber the girls at these camps.

“We’ve been the only girls in some of the Scout camps we’ve been to, and the boys can occasionally be not so nice,” Hakeman said. “They are weirded out and uncomfortable with us being there, so we’ve definitely had moments where we feel like outsiders.”

Through plenty of hard work, grit and perseverance, the girls have been steadily working their way up the seven Boy Scout ranks. Thesen and Hakeman have both achieved Life Rank, the one right before Eagle, and are currently working on their mandatory Eagle Scout projects. Thesen spends time at the Pets in Need Foundation every weekend to make progress on the garden beds.

In just three years, their rapid rise is a testament to their passion and dedication. According to Thesen, it takes most people around five to six years to become an Eagle Scout, but the girls in Troop 4057 have climbed the ranks in half that time.

The Scouts are beyond excited about their futures and eagerly await to bear the fruit of years of hard work and sacrifice.

“We’ll probably be the first female Eagle Scouts in Palo Alto and among the first in the state of California,” Thesen said.

“It takes some courage to stand up in front of a group of people and lead them and tell them what to do. I’ve found that I’ve grown a lot more comfortable being a leader.”

The Scouting program has fostered the girls’ growth in significant ways. Scouts emphasize good morals like helping others and showing compassion in addition to outdoor and survival skills. The future Eagle Scouts all agree that they’ve learned valuable foundational skills which will be useful to them in the real world.

“It takes some courage to stand up in front of a group of people and lead them and tell them what to do,” Hakeman, who is the troop’s patrol leader, said. “I’ve found that I’ve grown a lot more comfortable being a leader.”

Alex Sox-Harris finds it especially rewarding to observe the tremendous growth of the youth who are involved in Boy Scouts over the years.

“As an adult, it’s really inspiring to see the Scouts, both the boys and the girls, push themselves to learn important life skills like taking care of themselves in the wilderness,” Alex Sox-Harris said. “They have a successful experience and it gets them excited about the wilderness that gives them a sense of confidence that they might not have had before.”