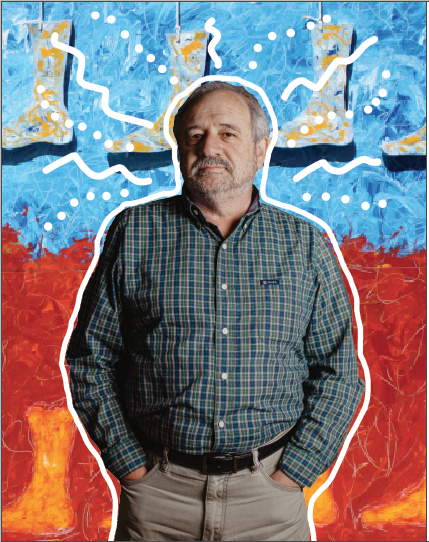 Sitting in crooked rows with backpacks strewn haphazardly around them, the students in Room 304 wait apprehensively for the teacher to summon them to present. One by one, they shuffle toward the front of the room, hoping they don’t botch their lines.

Presentations pass without a hitch until one unlucky student checks the class’s understanding and mispronounces “meses” — the Spanish word for “months.”

The class replies as if no mistake was made, but the teacher cries from behind his small wooden podium: “Mesas means tables. You mean meses? Why did you guys even answer?!” He sighs deeply and calls up his next victim.

From any other teacher, an outburst like this would signify a surly, disagreeable personality. But from Spanish teacher Josep Vericat, the mock anger and roasts are how he expresses his love to his students.

“Humor is a very important part of teaching because it creates a more positive atmosphere — a relaxing one,” Vericat says. “I can joke around a lot with the students … they know it’s my sense of humor, not a vicious intent.”

Vericat’s teaching career started long before he arrived at Paly and became the jovial teacher he is known as today.

“My wife brought me here, captured me and dragged me over here,” Vericat quips. “That’s why I decided to start teaching here.”

After spending 23 years at Paly and devoting more than half of his life to teaching, Vericat will retire at the end of the 2017-18 school year. From Barcelona to Bakersfield, San Francisco to Palo Alto, Vericat’s warmth and knowledge has touched over 3,000 students.

Vericat was raised in Ulldecona, a small town in South Catalonia, and graduated from the University of Barcelona in 1979 with a Masters of Philosophy and Education. Soon after he graduated, Vericat began teaching.

“But when I was in high school, I always had a big admiration for my teachers, and I just wanted to become one.”

“I know for a lot of people it is hard to decide what to do, what to be in life,” Vericat says. “But when I was in high school, I always had a big admiration for my teachers, and I just wanted to become one.”

Una manzana para el maestro: an apple for the teacher

Vericat attributes his growth as a teacher to the two courses he started here at Paly: Spanish 4 Civilization and Culture and Spanish 6, an independent study class that Vericat teaches without pay during lunch for motivated students.

Although students only have a few periods with Vericat each week, his class ambiance and humor have impacted students greatly over the last two decades.

For Spanish 6 student and senior Olivia O’Farrell, Vericat’s class has caused her to look at life in a more positive light.

“It makes me take life a little less seriously, but in a good way, where I’m … always trying to see the positive,” O’Farrell says.

Along with his lively classroom environment, Vericat says he will miss the bright students and faculty he has worked with over the years, as well as the camaraderie they have shared.

“I have been inspired by my students with so much potential,” Vericat says. “I have also enjoyed very much getting close to my colleagues through collaborating with them over the years as I have become a better educator.”

Spanish teacher Pilar Badillo Novas has worked with Vericat for five years and describes him as a funny and sincere character.

“Many times, Paly is so crazy and he just goes, ‘Don’t worry, just take it easy,’” Badillo says. “He just puts a little bit of sense in my life, a little bit of calmness.”

Vericat plans to divide his retirement time between his homes in San Francisco and Ulldecona.

“I miss almost everything [in Ulldecona] because it’s where I have most of my friends and all my family lives there,” Vericat says. “I’m the only one that came here to the United States.”

In Ulldecona, Vericat hopes to revive some of his passions that he used to have more time for and devote his days to enjoying art and nature.

“I’m going to try to paint again because personally I have not done a lot of that,” Vericat says. “Also, I love gardening and I have a big property in my town, so … I’m going to grow grapes and make wine.”

In just a few short weeks, Vericat will begin a life with no agenda after 39 years of following a high school calendar.

“Now my whole life will be a long, glorious, summer vacation,” Vericat says with satisfaction as he leans back in his chair.