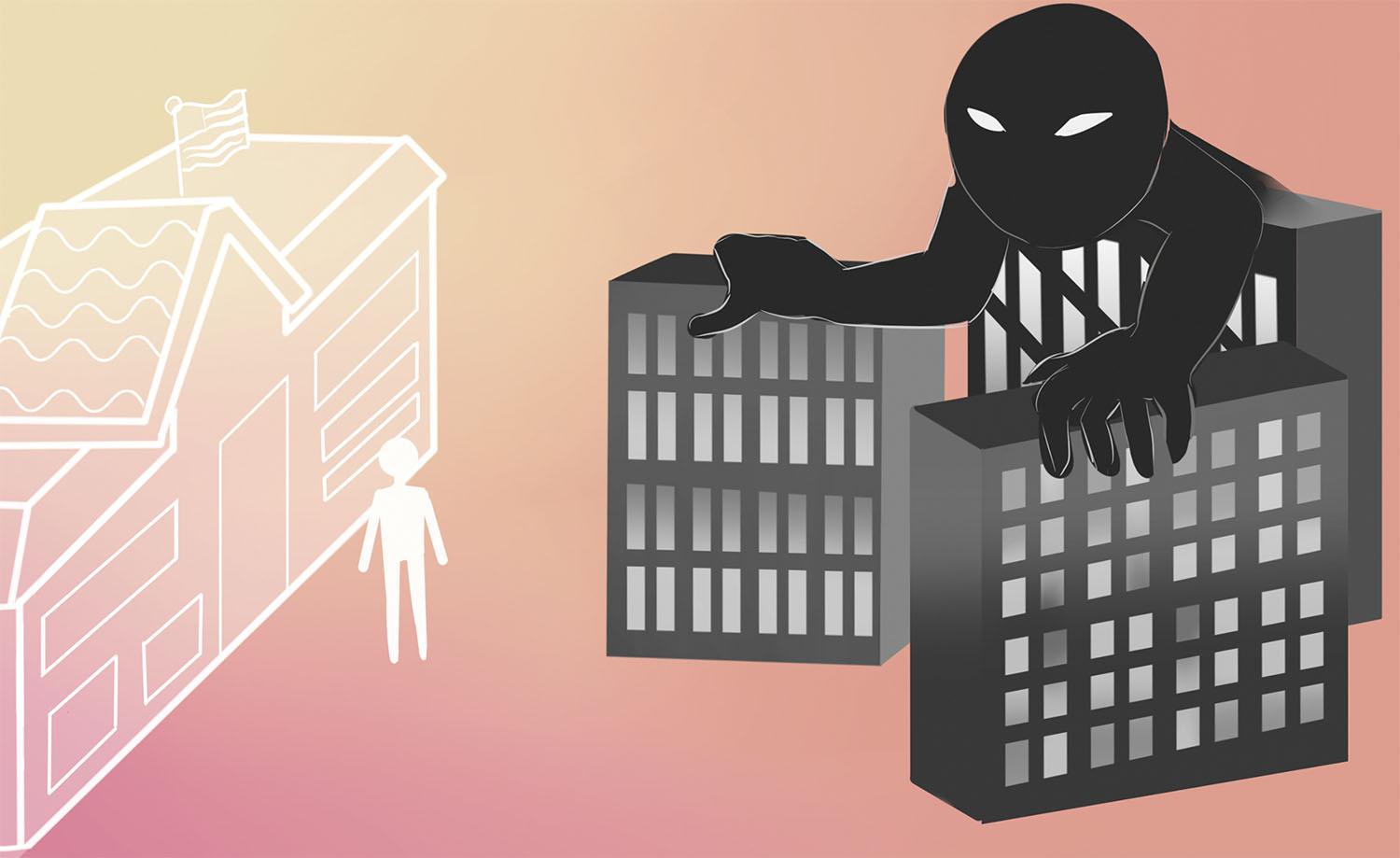 A Safe Haven For All?

Rendezvousing in the library would be safer, we decided. Safer than her apartment, where two out-of-place teenagers knocking on her door in the middle of the day might attract unwanted attention, unanswerable questions and a visit from a customs official the next.

Nestled between bookshelves and tabletops meant to provide some semblance of privacy, the back corner of a library is where we meet Grace, an undocumented immigrant whose name has been changed to protect her identity.

Although we were nervous about the meeting, it was clear that Grace was far more trepidant than we were. As we lusted after a story, Grace mustered up the courage to trust us with hers.

The question then was, how far did we have to step out of our world to understand hers?

When she crossed the Mexican border, she was only 16. A victim of sexual assault in her workplace, Grace escaped one hostile environment only to enter another.

Young, naive, and afraid but resolute, Grace took whatever measures were necessary to bring her to the United States.

“They took advantage of my innocence,” she says, recalling how even those helping her cross the border were also assailants who would often violate the people seeking their assistance. Her journey and hardships would not cease once she entered the States. Even after 24 years, her background continues to haunt her. 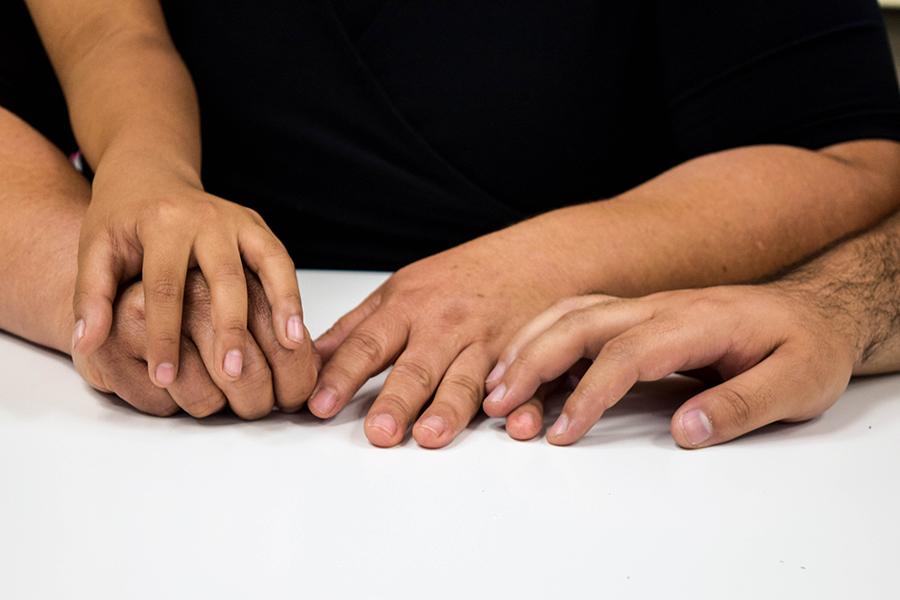 Grace holds hands with her children who reach out to console her as she retells her harrowing experiences. Photo by Frances Zhuang.

Being subject to blackmail from employers who refuse to pay her and threaten to reveal her immigration status, receiving intimidation from strangers as she drives down the street, fearing that at any moment immigration officers will pound on her door and separate her from her children — these are the terrors that rouse her from her slumber and keep her up at night.

“Every day I wake up at five in the morning … because I can’t go back to sleep,” she says, her voice thickening as she tries to suppress tears.  “We don’t know if we’ll wake up another day in this country or we’ll wake up the next day back in Mexico.”

When we ask about her family, her tears inadvertently begin to flow.

“[When] I came to this country … that is when I gave up my possibilities and instead I took all the effort and put it into my children,” Grace says.

As we speak with Grace, we don’t see a criminal, nor a freeloader here to bank off welfare, nor a “bad hombre,” as the President Donald Trump formerly labeled undocumented immigrants.

We see a survivor of assault and bad circumstances that never stopped plaguing her.

A woman who wears her fatigue and resilience in the bags under her eyes and on the wrinkles on her still-young forehead.

A mother who gave up her life so her children might have a chance at one.

One of 2 million undocumented immigrants in California and 180,000 in Santa Clara County, according to the Public Policy Institute of California, Grace is not alone in her plight.

Following Trump’s inauguration in January, the new administration released a slew of mandates and executive orders cracking down on immigration with renewed vigor.

Increased deportations have not been the only result. Hate crimes have increased 20 percent, due in part to the recent election cycle and a nationwide trend of xenophobia, according to a report by the Center for the Study of Hate and Extremism.

“They [immigrants] are so often a target of political rhetoric that obscures what immigration law does to communities,”  says Matthew Sellers, a law student at Stanford University who specializes in issues of immigration. “When politicians like the president paint immigrants with such a broad brush, some of the sentiments that it stokes damage relations for people who are here whether they’re here lawfully or not.”

Grace recalls how one day as she was driving down the street and passed a car going in the opposite direction, the driver made a finger gun and pretended to shoot her.

“The discrimination and differences existed before the current administration,” Grace says. “[It] just brought a face to what discrimination looks like … [and] people who are very open with their sentiments have come out of hiding.”

“Imagine going to school and worrying that you might get deported or that the identifying information you hand over … would put you at risk of being deported from the only country you’ve ever known as home,” Sellers says. “That’s an impact that I don’t think we can underestimate.”

In East Palo Alto’s Ravenswood School District, where many students are undocumented and more than half of the students are homeless or live in vulnerable housing, the resulting atmosphere is especially pernicious. The omnipresent threat of deportation is very detrimental to a student’s ability to learn, according to Ravenswood Superintendent Dr. Gloria Hernandez-Goff.

“You can be sitting there but your mind isn’t able to focus,” she says. “I’m not sure how much the students can actually absorb and process with so much going on in their lives and with their families.”

Organized by the district, support programs for the community have also experienced sharp decreases in attendance following Trump’s orders.

“We have a food program and the first week after the executive order came out, we had half of the number of people that normally come,” Hernandez-Goff says.

For many Ravenswood students, that’s the only good meal they’ll have all day. Out of fear, they go hungry.

While we spend our lunch money in Town and Country, most Ravenswood students have no lunch money at all, let alone lunch that’s not provided by the school. While our stomachs are filled with overpriced snacks, theirs are filled only with worry. In response, Ravenswood has declared itself a haven and worked in tandem with the City of East Palo Alto to aid residents with services, support and info sessions teaching residents about their legal rights and reassure them that local police officers are there to protect, not deport.

“They already have a lot of challenges here with … everybody working multiple jobs just to make ends meet, and then this [the executive orders] on top of that creates a lot of stress,” says Hernandez-Goff. “So that’s what I wanted to do — provide some reassurance and let people know that their children’s safety and well-being was our number one concern. When push comes to shove … we’re not just going to serve up information on a silver platter at the drop of an authoritarian piece of paper.”

Despite, or perhaps because of, her own lack of an academic background, Grace tells us she believes education is especially key for children of undocumented immigrants.

This mindset — that education is a commodity rather than a chore — may explain why second-generation immigrants are bigger economic contributors than their parents and even native-born workers, according to a study by the National Academy of Sciences.

“As an immigrant, it’s much more difficult to have access to resources,” Grace says. “That worries me — that I don’t have access to some resources that I can use to benefit my children because they come from a family of mixed immigrant status.”

Even with the turmoil plaguing her, Grace constantly supports her children by bringing them to and from school, assisting them with homework and frequently having conversations with them about the importance of education.

“Despite the language barrier … I am still someone who’s very passionate about education and will not just advocate for my own children but the children who need someone to advocate for them so that they too can prosper,” she says.

Bouncing from one meeting to the next, Grace is part of a parent group fighting to better education in her community, which has already succeeded in bringing a high-achieving charter school to the area.

“For myself and the families I know of a similar status, a lot of our contributions go into the way we form our families that contribute and work hard and are here to succeed,” she says.

Grace’s pride in her children is evident in the shine of her eyes and the straightening of her back. Despite her family’s difficulties and her own lack of higher education, Grace’s eldest now attends a prestigious university and her younger kids are on the path to college as well.

“We need to equip our children so they can adequately represent us in the future and begin to challenge rhetoric that we are criminals when in reality we are not,” she says. “It’s about building families and children who are the future and will contribute to the community as a whole.”

An exercise in empathy

Ever since she entered this country, Grace has been the target of animosity, antagonism and anti-immigrant sentiment. Her undocumented status is an affliction that she cannot shake, as there are no routes she can take to become a citizen without risking deportation. Like many other immigrants, perhaps like some of our parents, our teachers, neighbors and friends, she came here seeking a better life and willing to work to earn it.

“We as immigrants have an obligation to this country and we have ways that we contribute to the country,” Grace says. “That in itself should bind cities into protecting residents regardless of whether they are undocumented or not.”

Since the beginning, America was a nation founded on immigrants, and continues to be to this day. Removing all undocumented immigrants from the U.S. would reduce the country’s gross domestic product by over $1 trillion, according to the American Action Forum.

For the sake of securing a better future for her children, Grace embarked upon on a treacherous journey. Regardless of country of origin or immigration status, ultimately, everyone in this country is chasing the same dream. The difference? A quirk of where we were born.

As Grace opens up about her past, she shows us her sincerity, her diligence and her grit that have enabled her to undergo unimaginable difficulties, achieve incredible triumphs and push to change her surroundings for the better.

For America to relearn the value of immigrants and mend fractured ties, for us to move beyond the differences that divide us, we must all make an effort to communicate with, empathize with and show compassion to those who are different from us.

“The Civil Rights Movement was not won only by people of color,” says Hernandez-Goff. “The gains came because people from mainstream society, affluent people, celebrities … educated people … [and] people from all walks of mainstream America came together and joined in. That’s what’s going to make this happen.”

Read more about sanctuary cities in the Bay Area here.