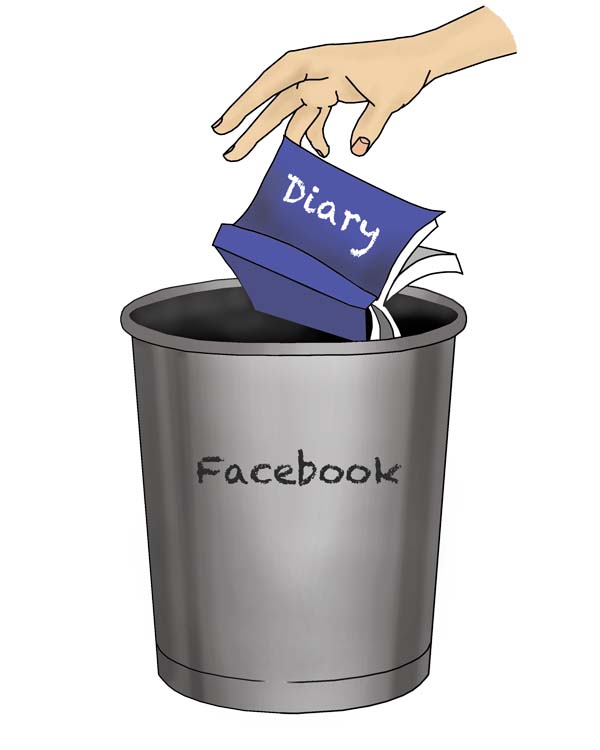 Your Wall Is Not Your Diary

How much is too much when it comes to sharing on Facebook? Because if there’s one thing that’s certain it’s that we all have that one friend who vents all of his or her personal drama to the public. It’s one thing to reveal your problems to a piece of paper or to another human being, but when it’s online that a whole other ball game.

There was a time when you spilled your deepest and darkest secrets in diaries, locked up, hidden away, and stuffed underneath your mattress. Anyone else reading your diary was unthinkable, the embarrassment intolerable and the public humiliation inevitable.

All of this has now been thrown out the window because of what Facebook has done to our perceptions of “connectivity.” Most people these days, including myself, can rarely go a single day without seeing a post from a friend complaining about his or her life. And let’s be honest here and agree that it’s highly unlikely anyone wants to see your deep, personal thoughts on Facebook anyway.

The fact of the matter is, the diary-esque post, regardless of how “deep” it may be, is probably going to annoy almost everyone who comes across it. It’s not that we’re cruel or lack empathy, but it’s because we all have our own problems, and the sight of seeing someone else spoon-feeding us theirs gets under our skin in a negative way.

“It really bothers me when I see someone else complaining about their life on Facebook,” says junior Toby Chen. “It’s like they’re crying out for attention and nobody likes that.”

I personally don’t understand the individuals who write personal status updates, and I try my best to avoid them when I see them. I just wonder why there are people out there who actually feel the need to share such intimate thoughts and feelings when they clearly know that there’s going to be at least one person who could not care less about what’s going on in their life. By doing this, it’s almost as if they’re asking to be judged.

The creators of Facebook, however, have made it clear that they’ve wanted the site to be a mechanism for bringing people together.

Technology runs almost everything in our daily lives; the world is already as transparent as it is. Do we need it to be even more so? This question is constantly raised but never properly addressed since many people out there still don’t realize the fact that the Internet is permanent and everything you put online will remain there forever, whether you want it to or not.

On many occasions, the personal things you post on the web will do more harm than intended.

If you hated your boyfriend for something he did, the best thing to do would be to go up to his face to tell him personally why he’s a jerk. Publicly telling all 800 of your “friends” is another story. If your status update is talking specifically about a certain person, then it isn’t a status update anymore ­— it’s become a public e-mail.

Let’s just take a moment now to think of how embarrassing it would be to send a private e-mail to the address book of your entire class at school. This is essentially what Facebook is. It’s not just a social network. It’s a big “send all” button revealing all your intimate secrets.

Facebook’s Timeline also gives users an easy interface, which means that essentially any techno-challenged person in the world can have easy access to all the things that you’ve ever posted online. This is another big problem with treating your Facebook account like a diary.  All anyone needs to do is click on the year and month that they’re interested in and the Facebook Timeline will take them right to it. Does knowing that your personal posts could be read by any stranger in the world scare you? It should. It’s something that gives further evidence as to why you must always be wary of the things you put on your wall.

The issues regarding Facebook not being your diary run deeper than just being annoying. Over-revealing posts can be a safety concern also, and should be taken seriously.

You should also be concerned about the things you’re posting if you’re looking for work since as high school students, we all know finding a job is hard enough as it is.

Never getting an opportunity because of a stupid update you posted online can make things even harder. Your employer is most likely not going to be a huge fan of your personal posts, and your actions can affect your workplace’s image. One vent on Facebook could keep you from getting that prized position.

It seems as though through the years we’ve started a trend; replacing real relationships with electronic communication. For some reason it has become more satisfying for us to be candid in front of strangers on Facebook instead of the real people who are standing in front of you.

The moral is, be open if you really have to, just not on your Facebook page. Don’t write anything online that you wouldn’t say directly to a person’s face, and don’t complain just for the sake of complaining. And before posting anything online, it’s important that you ask yourself two questions. “Will this hurt someone else?” and “Will this hurt my own reputation?”

If the answer to either question is yes, then step away from the computer. Be smart and use social media only for communicating with friends and family. And if you happen to feel the need the complain about your day, it’s probably time you went back to writing in your diary.   v